Most of us like a little bit of creepy in the month of October, but what kind of creepy tends to vary greatly. Some of us prefer true crime while others prefer fairy tales. Here are five excellent October books for a variety of predilections. Make sure to check out last year’s list as well, all comics I still heartily recommend. 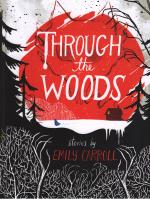 If you read only one terrifying graphic novel this year, let it be Emily Carroll’s masterful Through The Woods. It is a collection of five of her most horrifying stories, plus small introduction and conclusion stories. At least one of these stories has been previously published on the web while others are new. Regardless, all are wonderfully realized in this gorgeous hard cover volume.

Carroll is an absolute master when it comes to using the limitations of webcomics to her advantage. She uses the very way people read on computers to maximize the horror in her stories. However, these stories translate very well to print, as Carroll is incredibly smart about pacing and layout, especially as it relates to negative space and the flow of text. For those of you that like dark fairy tales, Carroll will take your breath away with stories that have a bit of sweet and a whole lot darkness. Carroll takes on all kinds of subject matter, from a jealous man that murders his brother (only to have him return, alive, three days later), to a body snatchers story unlike any you have ever read before. There is even a Red Riding Hood story with the tiniest tweak that gives it a whole new terrifying meaning. Carroll’s sensibility has always trended to the macabre, and her execution — the colors she chooses, the poetry of her words, how she structures her panels and her text — is nothing short of masterful. 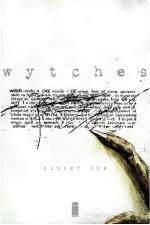 Though only a single issue at this point, Wytches is impressive enough enough to stand on its own. (It’s also already been optioned for the big screen by New Regency in coordination with Plan B, so get in on it now before absolutely everyone is talking about it). If you like your terror smart and dark and not so much gory as creepy and devastating, Wytches is the one for you. A family has moved away after something tragic happened to their daughter, Sailor. A girl bullying Sailor disappeared in the woods — snatched by something Sailor cannot explain, leaving her badly traumatized. What she saw haunts her, and the woods all around her home have ancient and powerful magic in them, the kind of magic that does not make you think of princesses and ponies and fairy godmothers. The illustrations by Jock are rough and tight in all the right places, ranging from sweet and emotional to funny to highly disturbing. The whole book comes together in a tightly pitched bit of terror – and be warned – issue #1 has a killer cliffhanger that will leave you begging for issue two. 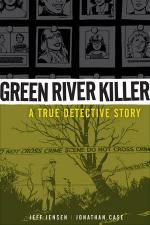 If you like your terror with a healthy dose of reality, this is the book for you. It is based on the unfortunately true story of the Green River Killer — one of America’s most notorious serial killers. This Eisner award winning graphic novel is smart and taut, if not your “typical horror.” The book details the decades long search to find, identify, and “bring to justice” the man responsible for the murder of at least 48 women in the Seattle Washington area. This detective tale is all the more horrific for its painful reality. Written by Jeff Jensen, the son of one of the primary detectives on the case, the comic has a matter of fact way about it that only emphasizes the tragedy. Focused primarily on detective Tom Jensen’s work on the case, including the 188 days he helped interview Gary Leon Ridgway – the Green River Killer— to identify as many victims as possible, the book is magnetic and hard to put down. Illustrated in a clean black and white style by Jonathan Case, the book stands out as being nearly bloodless and yet blood curdling all the same. 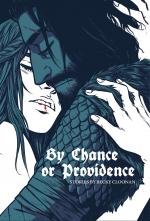 4. BY CHANCE OR PROVIDENCE

A gorgeous hardcover collecting Becky Cloonan’s self-published short comics Wolves, The Mire, and Demeter (The Mire was nominated for an Eisner in 2012), By Chance Or Providence is a stunning collection. Unfortunately as of this writing it appears to be sold out. If you can’t spring for the super pricey edition available on Amazon right now, you can hold out for the reprinting. Surely there will be a reprinting, though Cloonan is quite busy these days, co-writing Gotham Academy for DC Comics (another worthy pick for October – though not terribly scary and a bit more YA). In the meantime you can pick up the original (also gorgeous) single issues that are collected inside this volume via her website (links above). I highly recommend the upgraded silkscreen editions as they make for an especially magnificent object. Cloonan’s tends toward fairy tale with a dash of tragic romance. The black and white illustrations are subtle and nuanced in their horror, and only connected to one another in spirit. Each story stands on its own, but feels greater and more impressive in the context of the others. Crafting a compelling, emotionally resonant tale — let alone one that leaves you with a certain amount of heartache and terror in your throat — is no small feat, and Cloonan does it three times over with apparent ease. 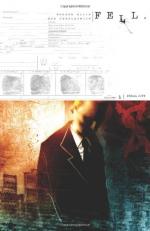 If you like your horrible crimes with the feel of reality but not the actual reality of a book like Green River Killer, Warren Ellis and Ben Templesmith’s Eisner award winning Fell is the way to go. This volume collects the first 8 issues of the 2005 series that follows Detective Fell as he’s assigned to Snowtown, a city “over the bridge” from another (apparently far better) city that is never actually named. Snowtown makes Gotham City look like Disneyland. Detective Fell is a dark guy, but honestly, next to the city of Snowtown (and its citizens) he looks downright optimistic and unequivocally good. In fact, though I’m sure there’s plenty of darkness inside Fell, his commitment to doing good is remarkably inspiring and encouraging and keeps the book from tipping over into too much despair. The crimes – murders and more – are decidedly grim, but Ellis peppers it with just enough humor to keep you from losing your goddamn mind. Ben Templesmith has long been known for his dark and moody illustration work. It’s not for everyone. Some people find it too dark (literally) and confusing, especially as Templesmith likes to play fast and loose with his characters, sometimes taking them to extremes. But there’s no mistaking the tone he sets and his evocative work is always distinctive and regularly disturbing.

So those are my picks this year. If you crave more classic terrors or something more grotesque, I urge you check out Dark Horse’s Creepy and Eerie comics — which are both revivals of the classic series, full of disturbing tales — as well their collected Creepy and Eerie archives reprints. And if you like your scary stories nice and adorable (I do!) then I’ll recommend (as I always do) Evan Dorkin and Jill Thompson’s exceptional Beasts of Burden.

What about you, fair reader? Do you have some favorite new books or old classics? Shout them out in the comments.