I can picture Don LaFontaine doing voice-over from the big vocal booth in the sky:

In a world of undiscovered countries and high seas adventure, a Dickensian composer living in Belgium... Wait a minute, that can't be right, can it? Are you sure? Ok, then... An intrepid journalist investigates improprieties at a nuclear power plant... Am I missing a page here? Is this even the same movie? An aging publisher on the run from the mob, trapped in a nursing home against his will- Alright, is this someone's idea of a joke? In the not too distant future, a clone working at a fast food restaurant contemplates rebellion, but is actually the subject of a holographic film being watched in a post apocalyptic future where the last surviving members of an advanced civilization watch over a group of primitives- Seriously, how can this be one movie? It doesn't make any sense. In the not too distant future, a clone working- dammit, we've done this part. An aging publisher... an investigative journalist... What the hell? Why are we going backwards? A Dickensian composer- That's it! I'm out of here! Good luck with your ridiculous movie.

From the Hollywood Reporter:

...the film will see the actors playing multiple roles in the various storylines. Tykwer and the Wachowskis will shoot parallel to each other using two separate film crews. It's expected Tykwer, whose credits include the 18th century-set Perfume: The Story of a Murderer, will handle Cloud Atlas' period era plotlines while the Wachowskis apply their Matrix mojo to the novel's sci-fi settings.

Of course, the question on everyone's mind is, how the hell are they going to pull this off? For those of you who don't know (and couldn't discern the ramblings of the theoretical trailer), Cloud Atlas is comprised of a sextet of stories structured like a Russian nesting doll. A Russian nesting doll starring at its own reflection. You get the first half of each story- except for the sixth, which sits complete at the center- followed by their conclusion, in reverse order. Each section is presented as a historical or fictional document in the one that follows (or the one preceding, if you're on the back end), acting as a thematic through line. It is a pastiche of genres, encompassing everything from high seas adventure to post-apocalyptic sci-fi. Each section would make a fine film on its own, but the novel as a whole would be better suited as a mini-series.[1] 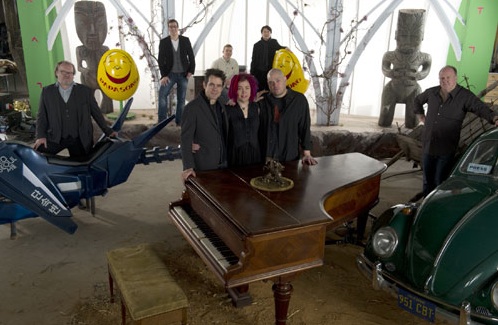 That doesn't mean I've completely written the adaptation off. I was intrigued when Tykwer was brought on board to direct, but then dismayed when it was revealed he would be sharing those duties with the Wachowskis. And I wasn't too thrilled with the casting, either. Tom Hanks and Halle Berry? The careers of both have gone steadily downhill since each won their respective Oscar(s)- Hanks a wheelbarrow full for various earnest performances and Berry for having wildebeest sex with Billy Bob Thorton in the overrated Monster's Ball.[1]

Sorry. That paragraph was supposed to be about why I haven't written the film off. I got sidetracked by criticisms. On to the positive.

Recent comments from those close to the production have instilled hope in this pessimist's cockles. According to producer Stefan Arndt:

Many [such as Joshua Chaplinsky of LitReactor.com] have called the novel unfilmable, but Tom and the Wachowskis have found a way to tell these stories in an amazing, linear and very cinematic way, [so nuts to him!][2]

Okay, maybe that isn't an exact quote, but that's what brackets are for.

Not convinced? It gets better. David Mitchell himself has weighed in on the script. It could just be the money talking, but I think he sounds rather pleased. He calls the filmmakers' take on his material “deeply impressive,” and notes that the trio “aren’t attempting merely to film the book,” which he says is “why many adaptations come to grief.”[3] His explanation of their approach to the material can be read below:

...the three directors have assembled Cloud Atlas and reassembled it in a form which – fingers crossed – will be a glorious, epic thing. The reincarnation motif in the book is just a hinted-at linking device, but the script gives it centre stage to link the six worlds with characters, causes and effects. A novel can’t do multi-role acting: a film can. The directors are playing to the strengths of their medium, just like I try to.

Fingers crossed indeed. I agree that the most successful adaptations are the ones that stray from their source material, like Naked Lunch or LA Confidential. Anyone who thinks a faithful adaptation of Cloud Atlas sounds like a good idea is deluding themselves.

Invigorated by these good tidings of great joy, I decided I needed more information about the adaptation process. A friend of mine knows one of the producers on the film and offered to put me in touch. This was back in August, when I still thought this was going to be my inaugural LitReactor column. Little did I know, I'd spend the next five months trying to get a quote out of the guy, an endeavor which ultimately proved fruitless. (To be fair, I was warned he wasn't the best with email.) In the end, I was told that "it was too early in the marketing process to collaborate with me," but filming went really well and they would show me the finished product in September and answer my questions then. I think that was their way of saying, "Nice try, small fry," but whatever. A free movie's a free movie!

So expect a Book vs. Film column later this year. Hopefully it won't consist of me spewing litriol[4] all over these hallowed halls. Cloud Atlas is one of my favorite books, and as unfilmable as it seems, it sounds like the filmmakers are going about things the right way. If they can keep the S&M raves to a minimum and coax a Bachelor Party caliber performance out of Hanks, this thing just might stand a chance.

Books We’re Looking Forward To In 2023

"This Story Will Change" by Elizabeth Crane & "Book of Extraordinary Tragedies" by Joe Meno.

I just heard about this story today. Wow.

It may be time for Joshua Chaplinsky to revisit this article. What did he think of the adaptation?

Here's what I thought:

CLOUD ATLAS is not only the best adaptation in several years, it is also the most exciting movie!

I was delighted with all of the performances and the technical prowess of this genre busting, mind bending film each of the FIVE times I saw it in the cinema. Since it came out on BluRay, I have watched it several more times.

Joshua Chaplinsky from New York is reading a lot more during the quarantine February 18, 2014 - 4:29pm

@Christopher: I did. Thanks for reading.