Somewhere situated between Easter Island and Papua New Guinea, perfectly pinned on a straight line between the Great Pyramid and the Nazca Lines lies the Isle of Dystropia, the place where every cliché and worn-out convention sticks out like rubble in the sand. Pawing through the debris, you'll find the trope that may just make or break your story. Each installment, we'll explore a different literary platitude, examining it for its various strengths and weaknesses. Set sail for Dystropia, where you might just learn something about your writing and yourself.

No other holiday boasts as much creative yield as Christmas. Not surprisingly, the 25th of December can have a lot really cumbersome clichés attached to it, some so idiotic you wouldn’t dare use them any other time of year. You have your Christmas Miracles, every ounce of plausible deniability for St. Nick's existence and how he does his impossible job, all those gifts from the Magi, and every attempt to "save" the holiday (because of course Christmas can't save itself). But rather than pull you through the usual minefield of cliches to avoid (to explore them would be cliché in itself, right?), let's look at some not so talked about Yuletide tropes, both in fiction and out in the real world.

Damn the short, feeble memories of the masses! As each year spirals by, people are chronically reawakened to the same things they experienced the previous year with the same wide-eyed amazement of Punxsutawney Phil. Summer is hot! Winter is cold! Spring gives me allergies! And why the heck are stores already playing Christmas music? It's still October! Whine, whine, whine…

During a holiday that is increasingly dominated by commercial interests, the Christmas Creep highlights the panoramic greed that encapsulates us all this time of year.

Oh, it's the Christmas Creep. Again. If you've ever worked retail (of course you have, most of you reading this are writers!), you know the personal Hell that fall brings, to say nothing about running a register on Black Friday. Every year, it seems the decorations are slung out even earlier, the Xmas tunes pumping on your stereo before you even have time to hang up your Halloween costume. How repulsive, right?

But you know what doesn't help? Bitching about it. If you don't like hearing Christmas music before the sun sets on Thanksgiving, maybe you should stop listening to radio and avoid shopping as much as possible, or maybe even celebrate the holiday by buying nothing. Perhaps not the easiest solution, but cryin' won't help you, prayin' won't do you no good.

Don't get me wrong: in real life, the Christmas Creep is an annoyance (and it's really nothing new, dating back to the '60s,, and is worse today as a byproduct of the piss-poor economy, etc.), but in fiction, it can be quite funny, at least as a one-off gag. The trope is explored in It's The Easter Beagle, Charlie Brown where the kids see ornaments and decorations in mid-April, multiple episodes of The Simpsons, several quirky songs, and even served as the inspiration for Tim Burton's Nightmare Before Christmas.

During a holiday that is increasingly dominated by commercial interests, the Christmas Creep highlights the panoramic greed that encapsulates us all this time of year. Even the Whos down in Whoville were noticeably happier once they got all their shit back. As much as anyone else, I wish we'd stick to using the Advent as a yardstick for the holidays, but in the meantime, I just hunker down until January and pretend this trope doesn't exist.

The War On Christmas

So if you want to argue that being encouraged to say "Season's Greetings" instead of "Happy Birthday to Baby Jesus" is somehow undermining the values of North America or something, you might need to be slapped with a history book. Christians never owned this holiday, nor does it have much to do with Jesus anyway.

But if you still think this constitutes Christian persecution *cough*Armeniangenocide *cough* I'd suggest throwing out all the pagan imagery a.k.a. idols in your storage closet before trying to tell Lowe's how to advertise the trees they massacre. Speck in your brother's eye and all that. Or, maybe, try having two holidays, a religious one and a blatantly greed-driven corporate one, as C.S. Lewis suggested in Xmas and Christmas: A Lost Chapter from Herodotus.

Besides, it's far more likely that Christ was born in June, given the Romans weren't keen on holding censuses in the frozen months and those shepherds wouldn't be standing around a field in mid-winter, even in Bethlehem. This brings a whole 'nother meaning to that hackneyed phrase, "Christmas In July."

Additionally, if the Messianic label offends you so much you substitute Xmas for Christmas, I have news for you. In Greek, X represents chi, which is Khristos or Christ. Xmas actually means Christmas and always has. The only way to truly avoid getting a little religion in your holidays would be to celebrate a different holiday. But hey, that's why Festivus exists, right?

You gotta hand it to the War on Christmas – it’s given us some pretty creative subversions, including Lurlinemas in Wicked, Prixin from Star Trek, and Holiday #11 from ‘70s cult TV show Quark. But since these “holidays” and others are virtually indistinguishable from the celebration they’re trying to avoid, you gotta ask, what’s the point? Oh, staying PC. Speaking of which... 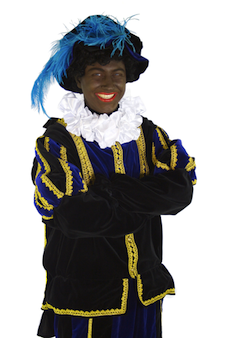 Despite the considerable time I spent in Europe, I could never quite wrap my head around the Dutch holidays, especially the Feast of Saint Nick (Sinterklaas, celebrated December 5th for the Dutch, December 6th for the Belgians). Apparently, Sinterklaas is not Santa Claus. Even though their names are similar. Even though they do exactly the same thing, bring toys and candy to children in the winter. Even though they both wear red (even if Sinterklaas looks suspiciously like the Pope). But they're totally different. And that means the Dutch celebrate both the arrival of Mr. Claus and this Sinterklaas fellow. I think the Dutch are cheating at Christmas to get twice the goodies.

The Dutch tradition says Piet has a face like that because he goes down the chimney in lieu of Sinterklaas and smears ashes all over himself. Still, that’s one gigantic unfortunate implication. It’s even gotten The United Nations death threats from protestors.

David Sedaris lampooned the strange sooty persona in his essay “Six To Eight Black Men,” but got a lot of the history wrong. Give him creative license, because it was funny, but still. Piet has many previous incarnations, including a demon, but never a slave or a black person. Most legends just paint the rapscallion as an Italian or Spanish chimney sweep that helps out a Santa Claus imposter and gets dirty. At least he’s better than the Krampus.

I remember seeing a Sinterklaas parade in Breda. Most Dutch people I talked to feel like the association with slavery is completely off and maybe they’re right. Then again, the Dutch Empire and their slave trade, which lasted from 1500 to 1850, isn’t winning them a lot of credibility. As a result, a lot of people have been pissed, claiming Piet is discriminatory and insulting. This trope is an example of “values dissonance,” when something seemingly innocuous doesn’t age well. Even so, many Dutch aren’t willing to let the tenets of their tradition disappear, which means we have every year to look forward to this cliché being trotted out in the comments section of any article mentioning Black Piet.

Speaking of comments, while you’re down there, maybe mention some of your favorite (or least favorite) Christmas tropes I might’ve overlooked.

Born in the desert, Troy Farah is a journalist that likes to burn things. His reporting has spanned VICE, Phoenix New Times, Flag Live and others, with fiction published in Sleeping in a Torn Quilt and Every Day Fiction. His website is troyfarah.com where he mostly dreams about the apocalypse.

Dystropia: Examining the Trope of the Manic Pixie Dream Girl

Dystropia: All Hail The Magnificent Bastard

Dystropia: How The Damsel in Distress Has Evolved

How Journalism Can Help Polish Your Fiction

Dystropia: How The Damsel in Distress Has Evolved