Guess The Plot, Episode I: "May Contain Runts"

Perhaps more than any other genre, science-fiction embodies that old saying about not judging a book by its cover. Many classic titles feature covers that are, at best, anodyne and, at worst, completely misleading. Indeed, publishers a generation ago would hire designers to create covers for books they had never read, or even commission stories after the cover design had been finished. We sci-fi fans must become amateur semioticians, decoding the covers of perspective purchases in a desperate effort to figure out what the hell they are actually about. Success brings the joy of a great discovery; failure caries the heavy price of artless dreck.

With this in mind, we here at LitReactor have come up with a little game designed to test your skill at deconstructing science-fiction book covers: Guess The Plot!

Here’s how to play: for each of the following four covers, you should come up with a one sentence description of the book’s plot. This logline should be the logical extension of the artwork and text on the covers, although wild-ass extrapolation is certainly encouraged. And no checking with Google for plot information, I want pure originality! Then post your loglines in the comment section below.

I expect genius, but will be more than happy with disaster. Make me proud/horrified! 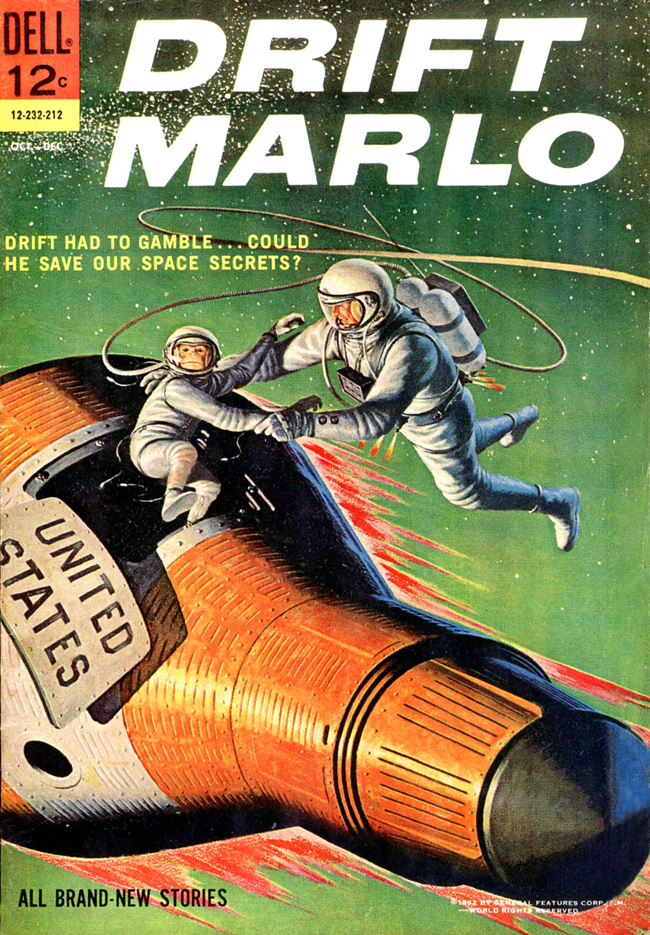 Coming hot right out of the gate! This cover raises any number of questions, the most pressing of which is, Drift Marlo?!? Huh? Is that a name? A command? A heretofore unknown style of street racing? I just don't know. Equally unclear is the relationship between the jet-packed man and his simian counterpart. I want to believe the monkey is saving the man from death by space, but he could just as easily be tossing him from that flaming capsule. (Great, great name for a band: That Flaming Capsule.) At least the U.S. is prominently involved! Also: do you think 'space secrets' are secrets about space, or secrets told in space? Was there a late-night Cinemax movie called Space Secrets, or did 13-year-old me just wish it? "In space, no one can hear your secrets! Now let's all make out before those sexy aliens come back." 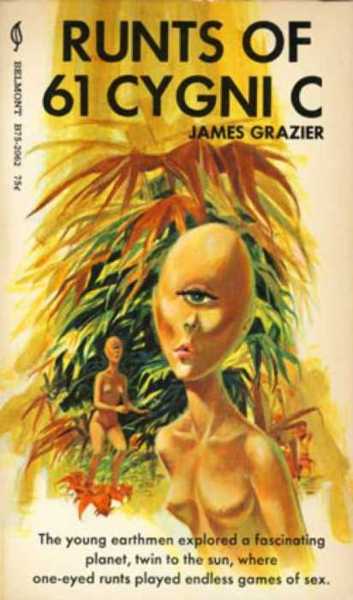 Oh boy. Oh...boy. For a second I was all, "Runts? They sound cute!" And then my eye drifted down and now I'm thinking I can never sleep again, or else the Runts will come for me. To start with my nerdiest observation, how can a planet be 'twin' to the Sun? Looks like James Grazier might have skipped Astronomy class in favor of creating the most disturbing creatures imaginable, and then concocting elaborate sexual fantasies about the same. I am creeped out by virtually everything about this cover, but here are the top three:

#3 The phrases 'young earthmen' and 'one-eyed runts.' We get it Grazier, you're a perv.

#2 The fact that the closest Runt appears to be wearing mascara and lipstick. Ick.

#1 The word 'endless.' You really want endless games of sex? Sounds like someone has had no games of sex at all. 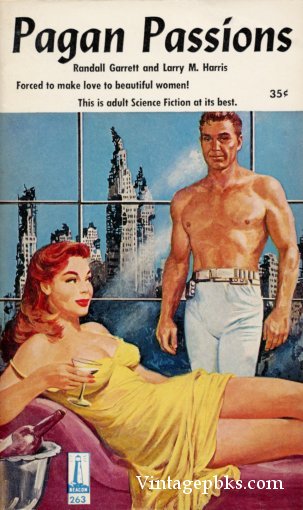 Now this just feels like pandering. Some enterprising editor took the cover to a romance novel, stuck a ruined cityscape in the background, and voila: geek bait. In my mind, that's why the words "Science Fiction" are capitalized. Dude wanted to be sure we got the message.  Moving on, if I'm really going to give your post-apocalyptic, pagan, polyamorous world any credence, then how did all those windows survive Doomsday? Am I really supposed to believe that society took the time to replace windows before doing the important stuff, like finding everyone shirts? Maybe that explains the cover's qualification that Shirtless Joe is only 'forced' to do it to 'beautiful' women. "All you 5s and below, you're on the window replacement squad. 6s and up, please find an open fainting couch and await your white-trousered paramour!" Man, this is complicated! No wonder it took two guys to write. 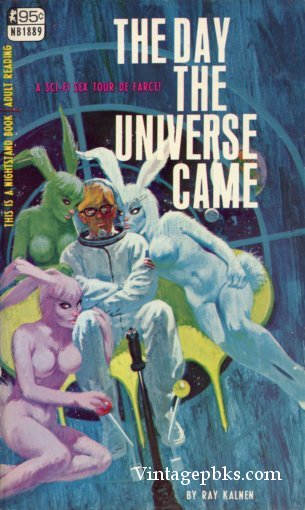 The Day The Universe Came

Listen we've been having fun here, but seriously: what the fuck? I understand The Day The Earth Came is a hilariously self-mocking exercise, what some might call a tour de farce, if they wanted to be incredibly lame. Yet that does not - cannot - explain the sheer insanity of this cover. This is extrapolation run horribly awry. "Guys love Playboy Bunnies. So what if a spaceman found a planet of actual sexy bunny-ladies? Classic 'nightstand' material, right?" No, Ray, it's not, you're wrong. That is classic furry porn. Furry erotica, in fact, that appears to star a somewhat more Aryan Woody Allen having 'sci-fi sex.' Based solely on that description, I feel like you could use this book as contraception. And 'came?' Blech.

OK kids, have at 'em! I want your best one sentence plot descriptions for all four books. As you might have already surmised, taste and propriety are out the window. And please, look out for those Runts!

[PS - got any suggestions for future covers we can use? Tweet 'em to me @Kornlock!]

Well, I would never be able to make a remotely reasonable guess on these but your write ups were hilarious. Great piece!

Drift Marlo: When their phallus-shaped capsule is set on fire, a man and his monkey are forced to bring their relationship out to the public, setting up a prevalent misconception about earthlings for the rest of the galaxy. Will their love remain strong? Can they build a future for other interspecies relationships? One thing is for certain. In space, it's easier to drift apart.

Pagan Passions: In Detroit, a man who is sentenced for the crime of wearing white after labor day is ordered to attend the rapacious desire of an upper-class amazon in a battle of snoo-snoo to the death. Will he be sacrificed upon the altar of her ardor? His only chance for survival lies in escape.

The Day the Universe Came: The Easter Bunny population is in danger! An alien race who sought succor on Earth is now captured for their ability to excrete chocolate eggs, and hunted for their erot-ahem-exotic fur. Three of the creatures form a plan - kidnap Bill Gates and hold him hostage until he builds them a spacecraft with which to escape this planet until they cu-aHEM-come back with an army to free their people.

(I just couldn't limit myself to one sentence. Sorry.)

I don't think I can top writercrossing. But damned if I won't try!

Drift Mario - A prized chimpanzee escapes his owners grasp stealing his prized racing ship, not before taking a box full of vintage scotch racing/orbiting around the sun in the wrong direction causing all kinds of space shuttle accidents while the space police attempt to stop him before he flips the vehicle into a building on the moons high rent district.

Runts Of 61 Cygni C - In the near future disease has genetically altered man due to the lack of protection from a goalie in the game of life forcing the least altered to find home on a more habitable planet.

Pagan Passions - Two scientists step into a time machine where they travel back in time to the year 2013 where they realize, through the event of having nothing better to do, that they were the ones to repopulate Earth.

I feel like I could go on forever, but didn't want to break the one sentence rule.  Why god why once sentence?

Drift Marlo: A monkey who knows too much, operating a spy satellite must be recovered before it crashes in the evil Soviet Union!

Pagan Passions: A young Sean Connery is such a stud, he not only rocks a woman's world... he destroys it.

The Day The Universe Came: The untold story of when Hugh Hefner was abducted by aliens and inspired his magazine empire.

Drift Mario: What was supposed to be a fun day at the Soap Box Derby turns deadly for a man and his adopted monkey son when the race track takes an unexpected turn... INTO SPACE!

Runts Of 61 Cygni C: A Mad Botanist discovers tiny cycloptic fairies living in his newly designed high-toxicity hallucinogenic shrubbery. He cross-breeds them to appear more like his fantasy woman: Jane Curtin in Coneheads. Luckily, his dick is so small that he can still make sweet love to them although they are but 3 inches tall.

Pagan Passions: A man arrives via time machine to a world where white pants are not just for women in tampon commercials.

The Day The Universe Came: Out of work futuristic neon furniture designer Reginald P. Moorsby becomes sickened by the hairless women of earth, and begins to pursue the furry rabbit women of a newly discovered neighbouring planet.

Drift Marlo: Drift Marlo, space explorer extraordinaire, discovers that spanking your monkey in space is a dangerous gamble indeed - and he almost pays the ultimate price!

Runts Of 61 Cygni C:  Intrepid space explorer, Drift Marlo, lands on a distant sun-like planet and is enslaved by one-eyed monsters that are slightly larger and much more insatiable than the one in his spacesuit.

Pagan Passions:  Freshly escaped from his orgasmic enslavement on 61 Cygni C, word about Drift Marlo's legendary stamina and new-found sexual knowledge lands him in hot water again - this time with a bevy of blond, brunette, and redhead Bolshevik bombshells!

The Day The Universe Came:  Drift Marlo "comes" to the rescue of his shy, beleaguered, young nephew, Dork Marlo, who has been captured by the bunny women of the planet Yobyalp, and uses the sexual kung fu he learned on 61 Cygni C to turn the tables against them.