We give you inspiration in the form of a picture, poem, video, or prompt. You write a flash fiction piece using the inspiration we gave you. Put your entry in the comments section. One winner will be picked and awarded a prize.

This month's winner will get a copy of Bats Of The Republic, the debut book by Zachary Thomas Dodson.

Bats of the Republic is an illuminated novel of adventure, featuring hand-drawn maps and natural history illustrations, subversive pamphlets and science-fictional diagrams, and even a nineteenth-century novel-within-a-novel—an intrigue wrapped in innovative design.

In 1843, fragile naturalist Zadock Thomas must leave his beloved in Chicago to deliver a secret letter to an infamous general on the front lines of the war over Texas. The fate of the volatile republic, along with Zadock’s future, depends on his mission. When a cloud of bats leads him off the trail, he happens upon something impossible...

Three hundred years later, the world has collapsed and the remnants of humanity cling to a strange society of paranoia. Zeke Thomas has inherited a sealed envelope from his grandfather, an esteemed senator. When that letter goes missing, Zeke engages a fomenting rebellion that could free him—if it doesn’t destroy his relationship, his family legacy, and the entire republic first.

As their stories overlap and history itself begins to unravel, a war in time erupts between a lost civilization, a forgotten future, and the chaos of the wild. Bats of the Republic is a masterful novel of adventure and science fiction, of elliptical history and dystopian struggle, and, at its riveting core, of love.

I'm sure there is a word out there to describe those obsessed with maps! I know I am. My ideal wall decorations are maps, and I refused to trash the coffee and snow stained U.S. road atlas that I've kept in my car since 2001—even though I have GPS on my phone, and the maps are likely outdated.

The book we are giving away is gorgeous with maps and diagrams, so use maps as an inspiration for your story. I will even accept pictures if you can upload them into the comments field. What do maps do? Direct you. Find you when you are lost. Orient you in a foreign place. Confirm that you are in the right place. Expose you to a place you've never been—and may never go!

And the Winner Is...Christina Re

Well, Christina Re is the clear winner here. She took the spirit of the prompt and the book we are giving away to heart and produced a story and an actual MAP to go with it! Amazing!! Love the details and little jokes! Way to go Christina! (Click to enlarge.)

This Planet Has Not Yet Been Rated

B1781 is an inhabited terrestrial planet with a molecular oxygen atmosphere in the Prinus Cathedi system. Black market planetary exports include coffee and television programs. 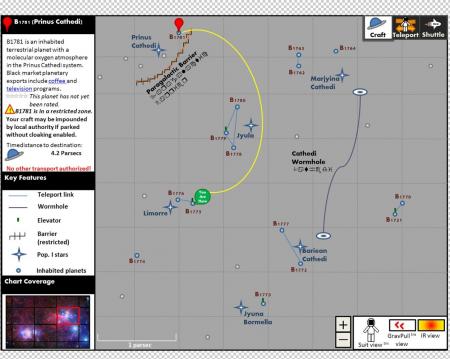 Acknowledging the gods of lightning and thunder, I sat forlornly in the downpour. I somberly ate my burrito as the cold, cold rain came crashing down.

"Defeat and the Burrito King"

Jack pressed the yellow, worn map against his forehead like some kind of psychic Indiana Jones, desperately trying to remember where he hid the body.

"Check the coordinates again," he yelled! As the twisted, shrieking figure emerged from the shadows they realized help was too late. Hell was already there.

He ran to the fire, map he has relied on all his life was burning.

‘Dad! Whose eyes will show me the path’, he cried.

Christopher Peterson from Illinois is reading the tea leaves... January 6, 2016 - 7:41am
Legend of the Censorial Cartophile


Rumors of his lust navigated the charts, breathing terra incognita and ghost towns. X marks the spot. “They don’t love you like I love you.”

"Having a map doesn't mean you know where you're going."

As I held the map against my chest,
I must confess;
I felt perplexed—scale, ratio, elevation…
…more like sedation.
Can’t we just use GPS?

I couldn't read the map for most of my life. Only when I was lost, did the markings gain significance and the destination become clear.

calteg from Austin, TX is reading One More Thing: Stories and other stories January 6, 2016 - 5:29pm

"What we once were, we can never be again."

Her face was a map of the world, and her place was no longer with him.

From memory she marked the coasts and mountains, the lakes and rivers. She added the midnight fog, that swarm of dragonflies, laughter on the breeze.

JeppeSehested from Denmark is reading Doron Rabinovici - Elsewhere January 7, 2016 - 6:03am

He closed his eyes to find the way. "Turn left at the ulcer and you've arrived." He dropped into the bloodstream and began his journey.

She navigated the crowd like a map to the end of the world written in their immobile souls and lifeless eyes. She never came back.

Her topological disaster of ink roads and coffee stain rivers penned in the dim diner on fifth street was enough to bring him back again.

Christina Re from the United States is reading something a friend wrote January 11, 2016 - 7:39pm

This Planet Has Not Yet Been Rated

B1781 is an inhabited terrestrial planet with a molecular oxygen atmosphere in the Prinus Cathedi system. Black market planetary exports include coffee and television programs.

'That much is true.'

These Shackles and Chains

Marie waits until Tom disappears from view before snatching the roadmap. Her injured hand throbs in protest, but she cannot risk her husband seeing her.

"I don't need directions or GPS. I'm a man and men read maps," Jack informed his wife, moments before reversing their SUV into a gorge.

Snow fell as a slow rain, slowly eroding the aged clues in hand.  Only fresh crimson colors our escape route now.  We won’t make it.

It covers every wall.

I just need to finish the tree where that dog died.

I had been feeling lost and alone.

I took a step and everything felt so right.

I took another step and threw away my map!

Christina Re from the United States is reading something a friend wrote February 1, 2016 - 9:25am

Woohoo!!! Thanks for giving me (and all of us who entered) the opportunity to get creative and have some fun.

Lindy Ryan: Stories Are All Around Us