Marlowe and Me: The Road Curved, and I Didn't

My son has done a lot of things to me, some that open my mind and some that draw blood. He’s shown me how to slow down, how to see things anew, how to enjoy the simple pleasures of shoveling sand from his sandbox onto my grill. He’s also given me a black eye, left numerous teeth marks on my legs or arms and, on my first day of class last year, as I’m already running late in my newly-ironed clothes (and honestly, the only time they were ironed that semester) he grabbed ahold of his diaper and flung it, spraying a rooster-tail of toddler crap across me and the room. All of those aside, one of the best things my son has ever done to me is ruin the ending of my novel, Fait Ave.

Two years ago I wrote a novel called Constellations that is currently holding up the corner of my desk and will likely stay there for a while longer. I’d thought it was pretty cool. Three novellas told from three characters’ points of view. Dark and complex, gritty and emotional. Yadda yadda yadda. It made the rounds, got some good feedback and even two conditional acceptances, given that I would essentially trash a third of the book and rewrite two large sections. I mulled over the notes and decided that, before doing any revisions, I needed to figure out why this last character wasn’t working. Around this time, my son was born.

I figured I should write an origin story novella (one that quickly bloomed into a proper novel, Fait Ave) to get a bead on this guy, find out why his darkness wasn’t compelling enough. In Constellations, he had the quintessential noir backstory: His wife was an on-again, off-again dope fiend who ODs, resulting in their toddler’s bathtub drowning. I mean, that’s pretty damn bleak, yeah? How could that guy not be interesting? (I might add for the sake of Child Protective Services that I started the book before my wife was pregnant.) It was a perfect backstory when I was dealing with the ramifications of it, as opposed to experiencing it directly, which, frankly, I was more comfortable with at the time. 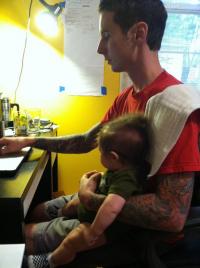 I got most of the way through Fait Ave and was pretty happy with it, although the entire time I was nervous about the ending. Sure, it was bleak and it was noir, but it was bleak and noir. But you know, write to what scares you, I thought. One afternoon, I was scrambling to finish the book while my wife and baby were out on a walk. I’d just gotten to the point where Elroy, the protagonist, barrels into their house, knowing something is wrong. And as he crests the top step, about to realize his destiny and seal my three-book deal with Mulholland or Hard Case Crime, my wife walks into my office carrying our bright bouncing baby boy and sets him in my lap. ‘He made his Daddy noise the whole walk,’ she tells me.

How goddamned noir is that? Talk about the fates lining up against you. I physically could not finish the book. I couldn’t force myself to hit the keys. That moment confirmed what I’d feared the whole time: Though it is bleak, this ending does not work.

From an intellectual perspective, I had all the boxes ticked. There was brooding and loss, cynicism and resulting misanthropy, tragedy with the possibility for some redemption of faith. But until my son sat in my lap, kicking his little checkerboard socks, I hadn’t realized that everything I’d constructed was just that: A construct. There wasn’t any organic narrative growth. Elroy hadn’t earned this horrible event (not that you can really earn something like that, but you get what I’m saying) because it was just some plot machination that I devised in order to explain the darkness in a man rather than create a character and allow his darkness to devour him while I record it. It’s an issue I think is tangentially related to Craig Clevenger’s excellent essay about transgression versus honesty, and even could be an extension of the most lauded and loathed writing idiom: Show, don’t tell. Without the character being formed by the narrative forces of the novel, I essentially had a hollow puppet to maneuver through the book.

Obviously, I had to start over from the beginning, re-evaluate Elroy’s whole trajectory as a character, see which alleyways his fate would lead him down. It was a pain in the ass, to be honest, but ended up being a wonderful thing. I had to consider this man as he was, his darkness personal and his struggles unique. By doing this though, by allowing him to be himself and not heed my every beck and call, I found fascinating little crannies of psyche to explore. I found characters in a few other stories I’d written who exerted influence on him, or he on them. By learning to address him as a real person and not just what I thought a noir protagonist should be, a whole universe of characters revealed itself because they were all organically connected to Elroy and each other. They drank at the same bars and bought looseys from the same Korean’s, they argued over the best coddies and attended the same funerals. I’d been focusing too hard on the actual page to relax and see these lives teeming just beneath the surface, the lives with which I’ve already mapped out two more books and numerous stories, and I wouldn’t have been able to if my son hadn’t come in, sat on my lap and kicked my novel to death with his pudgy baby feet.

Nik Korpon is the author of several books, including The Soul Standard and Stay God, Sweet Angel. He lives in Baltimore with his wife and two children.

Marlowe and Me: Jumping Off the Hay Truck

Writing And Parenting: A Survival Guide

Marlowe and Me: Jumping Off the Hay Truck

Marlowe and Me: The Road Curved, and I Didn't

Thanks Nik. I have to admit, Craig's essay was just a touch difficult to comprehend for me, but your article here, serving as kind of a supplement, has helped clear up the matter at hand.

Good stuff! I've created so many hollow puppet men by now I'm considering just cutting out the middleman and becoming a ventriloquist.

Happily i accept this pregnancy congratulations , Therefore i always offer to women read all the instruction about the http://www.lisapregnancymiraclereview.com ,Thanks for this struggle So Keep up the wonderful work.