6 Horrible Comic Book Presidents (and One Good One)

The 2016 election has come to resemble, in many ways, a comic book. Depending on your perspective there’s an underdog on one side and a demagogue on the other, with the latter hatching malevolent plans to take over the world. This Kierkegaardian either/or has rankled most Americans, but that’s the consequence of reducing the narrative to black and white, something comic books are often accused of doing.

As it turns out, the comic book medium has been used many times to take jabs at the current state of politics. This is because, at least for most of their existence, comic books (especially superheroes) haven’t been taken seriously. That has allowed many an ambitious writer to inject their own brand of radicalism and/or conservatism into mainstream storytelling. Some of these bear a striking resemblance to the reality of time, while others are strangely prescient. 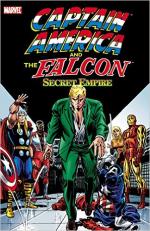 In 1974 the United States was still reeling from the Watergate Scandal. The event in question, a break-in at the Democratic National Committee headquarters in 1972, resulted in allegations of abuses of power against President Richard Nixon. Concurrently, writer Steve Engleheart was crafting the classic story “Secret Empire”, encompassing issues #169-176 of the then Captain America and the Falcon ongoing series. This storyline sees the clandestine titular group attempt a coup d’etat of the United States government, with their leader, Number One, strongly implied to be Nixon.

The storyline culminates in issue #175, ironically covered dated August 1974, with Number One committing suicide to avoid being captured. The government covers up the death and replaces the president with a double. The double presumably fulfills the actions of the real Nixon, who resigned on August 9, 1974. Upon learning of this, Steve Rogers quits being Captain America for a stretch, instead taking on the role of Nomad. This was the first of many storylines, including Mark Gruenwald’s “The Captain” and Mark Millar’s Civil War, that saw Captain America struggle with his role in relation to the government. 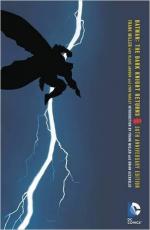 This is a well-known one, considering it’s from one of the most famous graphic novels of all time. In Frank Miller’s The Dark Knight Returns, although it takes place in a seeming not-too-distant future, it’s clear that Ronald Reagan is the president. This is, of course, not the real world, so much like Nixon being in his fifth term in the alternate 1985 of Alan Moore’s Watchmen, this is Reagan through a glass darkly. He wears a suit with red, white and blue stripes, and his rhetoric is amped up to 11 in relation to the war with the Soviets about to boil over.

This was, of course, emblematic of Miller’s anarchistic politics at the time. His work would go on to make even more jabs, especially in his Martha Washington comic books. After 9/11, however, he would become even more fanatical with his beliefs. The sequel, The Dark Knight Strikes Again, has the President (loosely based on Prez Rickard, see below) being an outright puppet for supervillain Lex Luthor, so that shows how much his opinion had skewed. 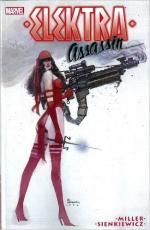 A fictional presidential candidate out of Miller’s Elektra Assassin, this one goes to much more abstract places. Wind appears to resemble a grainy photograph of Dan Quayle, the former senator and Vice President for the George H.W. Bush administration. Artist Bill Sienkiewicz, however, claims this is a coincidence and the picture is a self-portrait. It turns out that Wind is possessed by an evil entity called “The Beast” who intends to launch a nuclear strike against the Soviet Union and bring about mutually assured destruction once he’s elected into office.

This was in 1986, at the height of Cold War fears that seem so distant now. The president in office, a hunched over, pathetic old man that rants and raves about having the box with the red button to push, also seems to be a not-so-subtle amalgamation of Nixon and Reagan. Or maybe he’s every old white republican that’s ever been in office. Wind is young and handsome and a Kennedy-esque democrat, and although he does win, the titular assassin is able to place the consciousness of her accomplice, a S.H.I.E.L.D. agent named Garrett, into Wind’s body. The story ends with Garrett as Wind in the Oval Office, feet propped up on his desk, machine gun in hand. 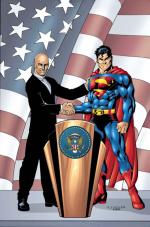 While Marvel Comics tries to stay in line with current affairs, even having Spider-Man meet President Obama in 2009, for a time at the beginning of the 21st century DC Comics went way off script. In the wake of the 1999-2000 Batman storyline “No Man’s Land”, corporate mogul Lex Luthor had garnered enough public enthusiasm that he ran for president. He wins the election, and actually goes on to be a legitimate president of sorts up until 2004 when he kind of, sort of loses his mind during the first arc of Jeph Loeb’s Batman/Superman. Prior to that, however, he reins in his supervillain tendencies and even gets a handshake from Superman, who acknowledges the will of the people. Of course, on election night Batman shows up in Luthor’s office to threaten him, but that’s Batman being Batman.

Luthor forms a cabinet composed of DC stalwarts like Amanda Waller, of the Suicide Squad, as his Secretary of Meta-Human Affairs and the former Sgt. Rock as his Chairman of the Joint Chiefs of Staff. That’s a good thing, too, because 2001 sees a major storyline with the earth being attacked during “Our Worlds at War”. In an eerie prediction of the future, Luthor becomes a “Wartime President”, with a famous image of LexTowers burning in Adventures of Superman #596, released on September 12, 2001. In the wake of this event Luthor was shown to be a Machiavellian president but not mustache-twirling, so his eventual ousting felt like DC not wanting to be obligated to keep it up for another term. 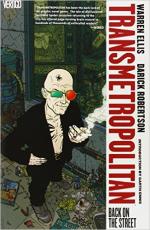 Transmetropolitan was Warren Ellis’s cyberpunk magnum opus that ran from 1997 to 2002. Published by DC’s Vertigo imprint, it follows a gonzo journalist, loosely modeled off Hunter S. Thompson, who fights to bring down two corrupt presidents. The first he calls “The Beast” (pretty common nick name) and believes the candidate running against him, Gary Callahan, is the lesser of two evils. But before Callahan, whom Spider calls “The Smiler,” is elected into office, it’s discovered that the man is an evil lunatic.

At one point the Smiler has his political director, Spider's friend Vita Severn, assassinated just to garner public sympathy. Spider butts head with the president throughout the rest of the series, losing his job in the process, but is able to keep publishing through underground means. He eventually brings the Smiler down, but at much personal cost. Transmetropolitan is strikingly cynical, but also represents the kind of journalism that would have greatly benefited the American people through this election cycle. 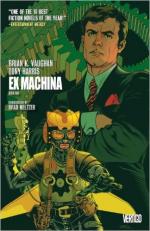 Ex Machina is a comic book about a lot of things, but at its core it’s about a superhero that saved one of the towers on 9/11 and went on to become mayor of New York. Written by Brian K. Vaughan (Y: The Last Man), it follows Mitchell Hundred, a civil engineer that develops the ability to talk to and control machinery when a strange device blows up in his face. He uses these newfound abilities to pursue a fairly unsuccessful career in crimefighting, but the one thing he does right is direct United Flight 175 on September 11, 2001 to safety. As he had already retired and was running for mayor, on November 6, 2001 he’s elected and the rest of the series follows his one term in office, followed by him being appointed as the U.S. Ambassador to the United Nations, and ending with him as the Vice President.

The twist is that he’s the VP under John McCain, who in this world won the 2008 election. A lot of Ex Machina mirrors reality, with events like the Northeast Blackout of 2003 playing major roles in storylines, but there can’t help but be divergences. Not only is Michael Bloomberg never mayor of New York, but this is a world where not only does a Twin Tower still stand (making the whole event at least a little less somber), but more than one person has super powers. The repercussions are subtle, but the series ran from 2004 to 2010 and was able to make things up on the fly. One was having Obama, whom Vaughan couldn't have predicted would be president when the series started, lose the election. Hundred’s visions, supposedly from God or whoever gave him powers, also set him on a path to eventually becoming president himself, with the implication that he had the potential to be a world-conquering Anti-Christ. The series ends on that ambiguous note. 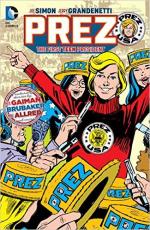 On a more positive note, there’s Prez Rickard, who first premiered in September 1973’s Prez: First Teen President, written by Joe Simon. Elected after a constitutional amendment allows for those under 35 to run, his adversary is evil businessman, Boss Smiley (whose face is a literal smiley face). If it’s not apparent already, this was a pretty out-there comic, with Prez fighting vampires and evil chess players. The comic only lasted four issues and was implied to be an “imagery” non-canon story, but in 1974 Prez showed up in an issue of Supergirl and was implied to be the president in the DC Universe of the time.

Forty years later, after Prez was reimagined a few times (first in Neil Gaiman’s Sandman series in 1993 and in Ed Brubaker’s Prez: Smells like Teen President in 1995), he became a she. Last year Prez was launched with a teen girl, Beth Ross, elected President via Twitter in 2036. The series, written by Mark Russell, is very much of a piece with the broad satire of the original, but through a modern lens. It only lasted 12 issues, but unlike all the other examples it portrayed a president with actual good intentions for the American people.

And that’s the problem, really. There’s something called Poe’s Law that says any attempt to spoof modern politics is automatically indiscernible from reality. These comics, covering a swath of writers from the 1970s to today, aren’t so far off now. Perhaps it’s because the election is more exciting if it has a narrative, and narratives always default to good versus evil.

Whatever the truth may be, let November 8 get here as fast as possible.

10 Awesome Comics To Give and Receive For The Holidays

cool article. As for Transmetropolitain, it's eery.