Hi gang, welcome once again to LitReactor's monthly tech and product round-up, where we take a look at all the new gadgets, apps, and whatever, filtered through the lens of writerly interest. This month, we're taking a look at a new Kindle (or, additionally, a new means of spiffing up your old Kindle).

As usual, we've got plenty of ground to cover, so let's jump right in. 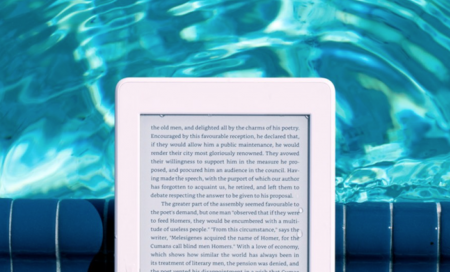 Just in time for summer! Now, lounging by the pool or on the beach is significantly less dangerous for your eReader.

Now, I put waterproof in quotations above because no piece of technology is ever completely resistant (not yet, anyway), but the specs on this new Kindle are pretty impressive. However, I should've probably also put "new" in quotations, since this isn't exactly a brand new device produced by Amazon. Rather, it's a company called Waterfi offering a spiffed-up, super-water-resistant version of Amazon's pre-existing technology. Let's turn to this TechHive review by Séamus Bellamy for some clarification:

For $230 ($110 above Amazon's typical pricing), Waterfi will see you set up with a third-generation Kindle Paperwhite which, through a proprietary process, has been waterproofed and tested for use in depths up to 210 feet. If that's too rich for your blood, Waterfi will also apply its waterproofing treatment [on] a first, second or third-generation Kindle that you already own. Just give them $99, plus the cost of shipping. In a few weeks, your Kindle will be back ready to take the plunge at your next pool party. The company stands behind their waterproofing with a one-year warranty.

Mr. Bellamy goes on to note that the additional "water and corrosion-proofing" treatments applied to the Paperwhite make it no less cumbersome and doesn't change its functionality whatsoever. He tested the product by placing the Kindle in a hot tub for thirty minutes, and while the device still powered on as it should...

...[the] glory of the device's survivability was dampened* by the fact that the water on its display caused the Paperwhite's UI to falsely register a flurry of input: pages turned on their own, system settings were changed, and bookmarks that I'm still working to remove were created.

So, in essence, the hot tub kinda fucked up his Kindle. Bellamy recommends the Kobo H20 for the ultimate in whoopsie jacuzzi protection, but I would imagine most folks won't have to worry much about this kind of disaster. I mean, unless you frequently hardcore fall asleep in the tub, at which point my advice would be to visit a sleep specialist, because that shit is dangerous. Still, the Kobo iteration of this tech is significantly cheaper (on sale as of this writing for $159.99), and if you haven't yet built a digital library with Amazon, it might be a good route to take. However, if you're in the opposite camp and you want a device that will have a better chance of surviving your water-romping summer plans, you could either shell out the bucks for the new Kindle model, or pay to have your current eReader modded out.

Speaking of Amazon, publishers and authors are unhappy with a new program from the e-tailer that allows "third party book re-sellers to 'win' buy buttons on book pages," according to Jim Milliot of Publisher's Weekly. He goes on to explain how this new feature works:

Up until now, the buy button on book pages automatically directed customers to new copies of titles Amazon stocked from publishers. Now, re-sellers can win a buy button by meeting various criteria outlined by Amazon which includes the price, availability, and delivery time.

In other words, Amazon will highlight the best deal available for printed books, rather than simply directing customers to the brand spanking new copies the company keeps in stock—which sounds great for customers, but which could seriously impact revenue for publishers and writers alike. See, even though the program is open only to new copies of a particular book, there are few ways to guarantee that the book is, indeed new, as a seller can list a book in "new" condition, despite the fact it is technically a used book. Amazon swears up and down this new system won't affect sales of bona fide new books, but industry pros are still skeptical (and there's even a conspiracy theory floating around that this new program is a ploy to force publishers into using the company's print-on-demand service).

At the moment, all publishers can do is "monitor the situation," so we'll see how this one plays out.

If you're currently writing with an iPad Pro and its accompanying Smart Keyboard, there's good news for you. According to MacRumors (don't be confused, this isn't a rumor, but a real thing), Apple now offers free Genius Bar servicing for the accessory for three years from the time of initial purchase. Writes Joe Rossignol:

Apple has determined that some Smart Keyboards may experience 'functional issues' during use, such as the Smart Connector not working or certain keys sticking, repeating, or not responding, according to an internal memo distributed to Apple Stores and Apple Authorized Service Providers...

If you're experiencing any of these issues, set up a Genius Bar appointment and have those cats take a look. Any repairs or replacements within that three year period should be free, according to MacRumors, but don't quote either one of us on that. And remember, accidental damage doesn't count.

You might be reading that headline and thinking that sounds wicked counterproductive, like trading cocaine for heroin. But the thing of it is, while Space—designed by Dopamine Labs—is a fantastic concept, it's actually a stretch to call the software an app. It's more of a thing you download to your phone that you use infrequently, but that provides methods for giving yourself some space (see what they did there) from the apps you just can't stop clicking.

Here's a bit more about Space's basic functionality from the app's website:

The smartphone has morphed from a productivity tool to an addiction. Apps use advanced software tools that shape and control user behavior. We know because our company, Dopamine Labs, sells it to them.

But people have no way to fight back in this war for their attention spans. And you can't actually just throw away your phone or delete the apps.

So as more people reported having an addictive relationship with their apps, it dawned on us: they don't really want to dump Snapchat.

Okay, so let's unpack that real quick: these developers work for the "man" selling software designed to get us hooked to apps, but now they're offering a free software tool that counteracts this addiction. I can't say if that's punk as fuck or just tokenism, but I suppose it doesn't matter, because Space does kinda work.

But how does it work? Basically, the sort-of-but-not-really app creates a "spaced out" dummy icon that you put in place of the official app. So let's take Facebook for example, which currently lives on my iPhone's home screen. 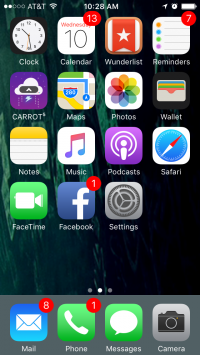 Now, I'm very much guilty of seeing those notification badges on the app and immediately clicking it to see who's commented on my post, or who's liked my post, or liked my comment, or commented on my comment, or whatever. Despite the description from Dopamine Labs above, I could just delete the Facebook app altogether, but I don't want to. I want to keep up with my friends and acquaintances I don't get to see in person, I just don't want that desire for instant gratification constantly nagging me to "push the button" as Newcleus would say.

So that's where Space comes in. Once you've downloaded it to your phone and launched the software, you walk through a quick tutorial, then arrive at a page featuring the replacement icons available that correspond to apps you already have downloaded. 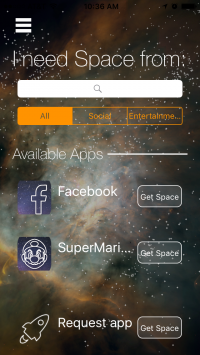 Note the ability to request an app at the bottom of the screen. Space isn't partnered with every app out there, so you might not get the freedom you're seeking, at least right away (remember, the point is to break the cycle of instant gratification, so don't get mad if the app you're looking for isn't available).

But back to Facebook. When you tap the "Get Space" button, a new window launches in your web browser with instructions on how to install the dummy icon. In the iPhone's case, I simply use the share icon at bottom center of Safari to add the requested icon to the home screen. 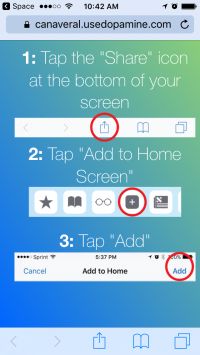 You'll have to rename the icon, because (at least where iOS is concerned), the name auto-populates as "Space." Once the renaming is done, tap add, you'll see the new icon added to your phone's screen. Reposition that icon to replace the official Facebook app, and bury the latter somewhere on your phone (don't delete the original app altogether). 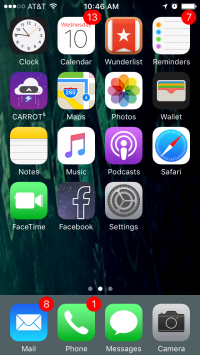 Now, instead of the usual blue background with a white F, I've got a decidedly more soothing space icon. Note too the lack of a notification badge, i.e., that big red button that says, "push me, push me!"

But that's only the beginning. When you tap on the new icon, it first launches a screen that requires you to take a deep breath. 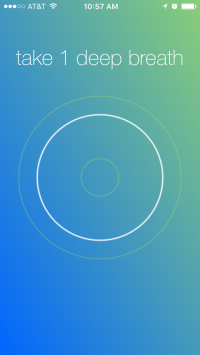 If you do this before the Space icon launches Facebook proper, you'll find that rabid desire to check those notifications decidedly quelled. The first time I checked Facebook using this method, I simply checked the notifications I had, then navigated away from the app. It's been my habit in the past to just go ahead and start scrolling through my feed for a bit, you know, since I was there and it was right in front of me. But with Space, that desire to stay wasn't there. I had other things to do at the moment, and I just didn't want to keep looking at Facebook.

Space is available for iOS, Android, and Chrome. You can download it here.

What Do Superheroes Read?

What Made 'Roseanne' Great

Get Your Sh*t Together: Six Memoirs for Personal Growth