The 8 Keys To A Good Heist Story

This week Ocean’s 8 brings us the first all-female heist film!

...if we ignore 1996’s Set It Off, which is a pretty good heist movie. It’s maybe less a romp than some others, but if we’re talking firsts, let’s put all the cards on the table.

Regardless, with the opening of Ocean’s 8, I got to thinking about what makes for a good heist story. What are the needed elements? Which 8 things should you make sure to have? And how can you use those elements to write something original?

A good heist has a planning stage, execution stage, and an escape. They can be in different proportions, but if your story is missing one of the three, it won’t pass muster.

The escape is probably the one most often neglected because it’s the hardest to pull off, but it’s what separates the smash and grab from the true heist tale. Give your escape a little more time, just 10% more than you think you need. I spent an entire story with these characters, which means I care about what happens to them after the dust settles.

If your heist goes off exactly as planned, without a hitch, it’s not much of a story, is it? Apply this thinking to any other type of story. How interesting is the story of a flawlessly-planned wedding that goes exactly as planned? How interested are you in a horror story where a bunch of kids go to a cabin in the woods and get there and they have a pleasant weekend?

Hiccups are what make the heist story come alive in the moment, rather than having it be a constant acting out of the plan as if the plan were stage directions.

Do yourself a favor, don’t concentrate your hiccups all in one phase of the story. They should be spread out during the planning, the execution, and the escape. Mixing it up keeps things lively.

When you make the motive “Little Billy needs this money for a heart transplant,” you lose me.

3. Putting The Team Together

They say everyone likes to see a plan come together, but better than a table full of blueprints and elevator schematics is seeing people come together.

4. A Reason Beyond Cash

In The Hunter, the Richard Stark classic you HAVE to read if you care a lick about heists, our main character goes after the man who screwed him out of a small amount of money. It’s almost a joke throughout the book that Parker goes to such lengths, risks infuriating bigtime players in organized crime, just to get back a relative pittance. But that’s the thing, it’s not really about the money. It’s about what the money represents.

A heist can happen purely for cash, but if it happens for something more than cash, the audience will give a shit, and we’ll learn something about the characters. For example, Parker, the main dude in The Hunter, can be kind of a blank slate, but because he’s doing something irrational on principal, we learn a little bit about him. Or, consider Walter White in Breaking Bad (not a heist story exactly, but it features a cash-motivated character). His motive starts with cash, but about halfway through the series we start to see there’s more going on there, and it’s not about the money or the baby or whatever. It’s about Walt.

Please, do me a favor and don’t go crazy here. When you make the motive “Little Billy needs this money for a heart transplant,” you lose me. That’s the easiest path to take, it’s been done, and it’s boring. But when a heist has the added bonus of hurting someone, that’s a little more intriguing. When a heist is also about a point of pride, I want to hear more. When someone pulling a heist has something to prove, I want to see whether or not they’re right.

5. Something To Root For

Most heists give us a good reason to be on the side of the crooks. When it works, we almost completely forget that what they’re doing is wrong. There are some different methods to make this work. You can make the thieves very likable. You can set up a Robin Hood situation. You can make the mark very unlikable, in which case we don’t really care WHAT happens to them. A modern twist on this is to set up the theft as a sort of small revenge for larger societal ills.

One way to switch it up, give us a reason to side against the crooks, and that can raise the tension as we watch the hapless victim struggle to stop something in progress. Imagine an Ocean’s movie from the victim’s perspective, especially if the victim is presented to us as a decent person.

Any way you work it out, even if it comes down to a small thing, if we don’t care about the thieves or the mark, we won’t care how things pan out. 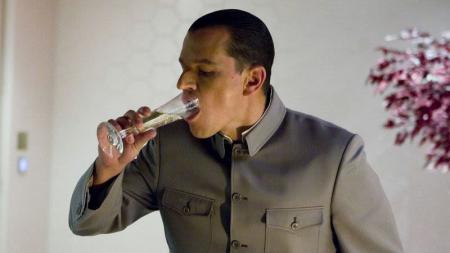 6. An Element of the Ridiculous

What separates a heist from a straight-up steal? What elevates something from a crime to a caper?

An element of the ridiculous.

In the first Mission Impossible movie, Ethan Hunt is suspended above a floor he can’t touch, and he catches that drop of sweat. So ridiculous, so memorable. There’s a Richard Stark book, The Outfit, where thieves put together a getaway car. They go to great lengths to soup up a Volkswagen Beetle. By the time they finish, the thing is a beast, and it’s the most unassuming car, the least likely candidate for a getaway car. It’s a sight, a Beetle tearing ass, and by the way it pre-dates the original Italian Job and its Minis by a few years.

Whether it’s a fake nose on Matt Damon, a souped-up car that has no business being involved in souping, or something else entirely, something good and ridiculous provides a nice anti-anchor in a story type that can default to being a little too grim and gritty.

A heist story shares one huge thing with a sci-fi flick: the need for plausibility.

Let’s briefly discuss the difference between believability, plausibility, and probability.

Believability means I believe something could happen. That, in my eyes, is the least of the three, and it’s not quite enough, but you have to clear the bar of believability to get to plausibility.

Probability is the highest bar. It means I think it’s likely. That’s not necessarily what I need. No, I don’t think it’s likely in reality that a group of 8 folks could pull off a multi-million-dollar heist in 2018.

But plausibility, which I’d advise as your goal, lies somewhere between. I don’t have to think that there’s a good chance. I have to believe there is A chance. That with the right people and the right set of skills, it could happen.

One pitfall to avoid is over-reliance on technology in bridging the plausibility gap. This is the problem we see in a movie like Hackers, which seemed very high tech at the time and now seems totally ridiculous.

Build to plausibility, but stop short of probability.

8. Willingness to Break The Rules

You need all this stuff to make a heist story, but it’s how you break the rules that makes your story unique and interesting.

Don’t take this for cheesy, fluffy advice. It’s not. It’s my advice that you read up, watch everything you can get your hands on, and once you thoroughly understand what a heist is all about, once you’ve been completely intimidated by the greats, take a crack at it and make  it yours.