Twitter is a hole. And unfortunately, it only takes one person shitting in a hole for any hole to become a shithole. So, by that common standard, Twitter is definitely a shithole. But I don’t want to put that on anyone in particular. Instead, I want to tell you about a way we might be able to shovel some of the shit out. And I'm here to hand you a shovel.

It’s really easy to waste time on Twitter, telling yourself that you’re building your author brand.

Sometimes these are goofy fun. The now-dead @Betelgeuse_3 would reply to any Twitter user who tweeted "Beetlejuice" three times.

@earthquakeBot tweets when an earthquake over 5.0 on the Richter scale is detected. I highly recommend this if you are not freaked out enough by geologic events.

@censusamericans tweets mini biographies of Americans based on Census data. From lives to data and back to lives. Good stuff.

You Give Bots a Bad Name

Bots have a bad rap because some people use them to spam nonsense. Or pornography. On one hand, robots delivering pornography to one’s digital doorstep sounds like the future to me. On the other, it seems like this pornography tends to wreck your credit or your computer. Or both.

But bots aren't bad. They're just tools that perform the tasks set up by their programmers.

You could use a wrench to smash someone's face in, or you could use it to fix some plumbing.

Don't let your preconceived notions about bots get in the way.

How Writers Can Use Bots

The most basic functions of bots involve retweets, likes, sending messages, things like that. Those are the super easy things to do and a good way to get started.

What sorts of things could you do?

You could create a bot that retweets open submissions windows.

If you've got a book coming out, you could retweet anything that mentions your publisher.

You could automatically follow anyone who tweets using a certain hashtag.

You can automate following people back.

You can automatically follow everyone who tweets a certain phrase.

You can automatically DM someone who follows you, and you can set this up so the automated DM includes a link to a special piece of content. [*EDITOR'S NOTE: Most people HATE this, especially if that content is a link to where they can buy your book.]

Did you know that Machiavelli wasn’t evil? He wrote this book, The Prince, about how to succeed in the world, ruthlessly, but not because he was saying this was a good idea. The Prince is really an expository piece that shows the world is kinda fucked-up.

Creating a useful bot can be a boon for you personally. Tweeting things that help others can be a great way to boost your own signal online.

Also, if you’ve done a lot of submitting, you know that having a following online is something they occasionally ask about. Hey, if you’ve got 8,000 Twitter followers, that helps a publisher's chances of getting a return on their investment, and that gives you a little more bargaining power.

These aren’t the most altruistic reasons to make a Twitter bot. But if your genuine way of helping others helps you out as well? Sounds like a win. 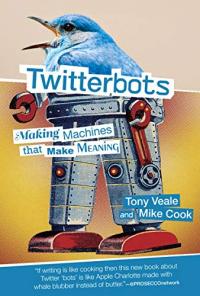 I'm going to tell you the basic steps, but you'll need to look into this more.

First, if you want to create a Twitter handle that does your bot stuff rather than tweeting from your current account, do that.

Next, you need to apply for developer status. So you'll go through the steps, tell Twitter you're making a bot, and they'll either approve it or not. Just be honest, and if your proposal doesn't work, they'll let you know.

You then build your bot.

I went with a paid service to do this, so it’s about $5/month. I do not have the coding background to build one from scratch, and besides, my purpose here is to save time.

This made it pretty simple for me. Check out this outline and decide whether it's right for you.

Back to the Hole

Before you start your bot army, one more thing that’s good about bots.

It’s really easy to waste time on Twitter, telling yourself that you’re building your author brand. We all start that way...and an hour of scrolling later, we’ve made zero headway in building a brand, though we have heard some very interesting conspiracy theories. My current favorite? Taylor Swift only carries empty purses. Why she does this and how this theory started, I do not know.

Anyway, you can waste HOURS looking at pictures of Taylor Swift holding purses, wondering if all her bags are empty or if perhaps she's much stronger than she looks, or you can use a bot to automate some of your shit, spend less time on Twitter, more time writing.

Most of us use Twitter in two ways, with varying ratios. One way is for “professional” stuff, and the other is for “personal” stuff.

Pick one of those two and set up your bot(s) to handle that. Then, when you log in, you can focus on whichever piece you have left.

I don't do a great job with the professional stuff, so automating that helps me a lot. Then I know that when I go to Twitter, I'm just screwing around. I look at my empty purse pictures without deluding myself that I'm being productive.

You can do it the other way, too. If you find yourself constantly pimping your new book, automate some fun into your timeline so your followers get a better ratio.

Got any bots you like? Or any we should be following?

Get Twitterbots: Making Machines that Make Meaning at Bookshop or Amazon

Get The Prince at Bookshop or Amazon

Michael Clark on Marketing Your Book