Write Drunk: The Science of Altered States and Creativity

From Dionysian celebrations in Ancient Greece to vision quests and well beyond, the idea that altered states lead to creativity is an established cultural "wisdom." Many writers treat the Ernest Hemingway saying of "write drunk, edit sober" as a commandment from the Muses. But do altered states really expand our creativity? What are the limits? And, perhaps most importantly, what are the reasons?

I'll explore all that in this article, but I'll also be doing something more: Drinking.

When I pitched this article as an homage for Saint Patty's, my editor asked if I'd be willing to get drunk while writing the article. And, you know, I just feel so loyal to this team that it seemed like getting drunk was the right thing to do. What's more, a friend of mine had a birthday celebration with plenty of alcohol, and he gave me permission to work on the article while at the party—so the timing was right.

I'll be letting you know how hard I'm hitting the bottle as I proceed, and I'll make visible notes anywhere I do post-drinking edits. (I originally planned to leave it all unedited, but later decided not to subject you to that particular mess.)

So … let's get this experiment started. Sláinte!

The Science of Altered States

No, Seriously. I Have Evidence.

The Divide Between Language and Creativity

The Divide Between Language and Creativity: Take Two

The Divide Between Language and Creativity: Take Three

Obviously, altered states help in some ways and hurt in others. Getting rid of stress, perfectionism, and habitual thought can open up a space for creative connection, but we also lose out on cohesion and the simple ability to express our ideas clearly. Over time, new drawbacks are added on: Altered states lose their benefit if we make them regular parts of our process. New thought patterns will emerge and the sober state we return to will be plagued with new stressors (hangovers and lost hours among them).

Perhaps the most significant downfall, however, is even simpler: Using altered states prevents us from working the mental muscles that would allow us to tackle perfectionism, stress, habitual thinking, etc., etc., without the use of substances or sleep deprivation. These are barriers that can be torn down in other ways, and sneaking around those barriers simultaneously reinforces them. Hopefully this article has given you some insights into non-substance-based ways you can approach your own creative process more effectively.

What do you think? What have your experiences been with altered states and creative writing? Anywhere you think I missed the mark? I'd love to hear your thoughts. Share your ideas and experiences in the comments, below.

The Power of Habit: Why We Do What We Do in Life and Business 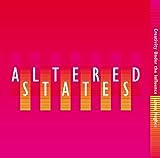 Altered States: Creativity Under the Influence

Robbie Blair is a world-wandering author and poet who blogs about his adventures, the writing craft, and more. He was doomed to write when, at just three years old, his English-professor father taught him the "To be or not to be" soliloquy. Robbie has since published more than a dozen creative pieces in literary journals (including Touchstones, Enormous Rooms, Warp + Weave, and V Magazine). Robbie Blair's website is loaded with travel narratives; original creative work;  writerly humor; pretty pictures; writing games, lessons, tips, and exercises; and other uber-nifty™ content.

8 Ways to Support the Writers in Your Life

Willpower, Muses, and Other Destructive Myths of Writing

Write Every Day in 2014: 14 Steps for Forming A Writing Habit

Fiction Shmiction: The Complex Question of Writing as Activism

The Problem with Rape's Portrayal in Fiction

6 Ways to Save a Mary Sue

A Reading List for Self-Guided Study of Ancient Literature

5 Strategies for Enriching Your Character Arcs

Maybe somewhere between incoherence and sobriety, there lies a "sweet spot." Don't forget, most of the authors we know and love were professional drunks - no amateurs here. These guys spent long hours, countless words, and many bottles practicing their craft.

Crowley often spoke of finding the minimum dose to alter consciousness and then extending it out for as long as possible. He was speaking of hash, of course, but the methodology seems applicable. Perhaps a session beer, a little over one an hour (depending on weight), to keep things lubricated. More than that, one risks getting sloppy, which would be counter to our purposes. As we see above.

SomeoneSomethingJr from the oh so heavenly town of Oslo is reading The Right Madness by James Crumley March 11, 2014 - 8:41am

Wiriting drunk is effective in terms of quantity. I tend to write more while drunk, but doing so also effects the quality of what I'm writing, often for the worst.

I'd rather write on something else than alcohol, or alcohol combined with something.
Alcohol gets too emotional and messy passed a certain amount of beers and it doesn't help me think outside the box.
It doesn't boost my creativity in the direction I'd like it too. It's too restrained, too familiar.

And I agree with you Scott - a buzz is far better than stumbling drunk/stoned/twisted.

I prefer low doses of LSD. Maybe a brownie. And by low doses I mean LOW doses.
Doses that won't leaves you staring at walls and fondling flowers.
Alcohol in combination with any of these at low doses is pretty good though.
You get the mindspace from the psychedelics and that eager drive from booze.
Something that shakes my head for a couple of hours and doesn't fuck me up completely the next day.

I gave it a go with coke, but the rambling on the page became as obnoxious as my clenching jaws. Same for MDMA.

Some of my best writing has happened in-flight, tipsy on gin and tonic.

As I mentioned on this same topic in the forums, alcohol in small doses makes me too sleepy to be productive. Four or five drinks, though, I'm energized but wanna do anything except write (though I do like making music with a buzz on). I might get some decent ideas while intoxicated and uninhibited, but that's not the time to execute them. Just make a few notes so I don't forget, and then do the actual writing when sober and likely caffeinated.

This comic from XKCD illustrated the idea of a "sweet spot" for program coding, but I thought it would be applicable here. Speaking as someone with an BS in Comp. Sci. I can attest to both the peak and the precipitous drop-off.

No matter how tempting the sweet spot sounds, price of conditioning your body (and creative process) to an external stimulant is a bad idea. I mean I might get hypocritical sometimes, but I don't think I'll lean on it regularly.

With that being said, cigarettes are also seem to do a great trick. I don't smoke at all, aside from being trapped in a room with chain-smokers in pubs, etc. (smoking regulation in Mongolia is a joke), but I remember finishing for 12-page comics a story after puffing a single stick on an impulse.

Stephen King also said something about (I think in On Writing) how his synapses weren't coated because he's quit smoking.

Vinny Mannering, you were right the comic does the trick. Many writers know that some days when you're sober you are also bored and staring at a screen. Now that you have the typing program open, your mind is blank. Less than five minutes ago the ideas were spinning, but now that your ready to put them down you don't know where to start or what words to use. Many times we spend too much time correcting grammar to pull the story forward. I agree with the altered states and how this can help with creativity. We need to get in the right creative zone verses a completely deluded one where we start drawing smiley faces on the screen instead of painting words into books. From the article, we can see after a while the columnist repeats himself. Many of the things I write come off as too desturbing for most people to read, even this response may be too desturbing for some.  During the production of my first novelI, I had never experimented with drugs. I did experiment in other ways. One time I went a month without eating food, no vitamins just a little swig of H2O from time to time. After three days I was no longer hungry. Two weeks passed. My stomach swole as the little fat my body had broke down into methane. The gas pumped through my blood stream. The lights around me emmitted rainbows. Whispers and other sounds were experienced, which made me believe this was why all those people in the Bible thought they were talking to God. After 30 days, solid food was a must. Any longer may have resulted in a labeled rock above my head instead of responding to this article. The after affect resulted in sour gas excreting from every possible pore in my body. Imagine farting out your eye sockets. People turned with sickening expressions from the invisble odar that no amount of water could wash away contaminated the path I walked. My stomach churned as though gasoline and fertilizer were mixing with Jet fuel inside. One second with a match or lighter would have resulted in my body flaring up like the human torch. This was an experience that opened my eyes and asisted with creating expeiences for one of the characters in my first book. This book was not finished during my moment of fasting. Talking With Strangers was finaished thanks to three months of insominia that followed, which as we know could be considered another altered state. Much editing was needed when I was in a sober mindset, but the altered state assisted in covering much of the ground. Altering our mind's state might not get everything accomplished as we desire, but this offers an experience we can use to create a story worth reading.

Thank you assistant about it and phd dissertation proposal available for students. Education is important for everyone.

Science is one of my favorite subject of study because it shows me the existence of God.|Purchase Dissertation||Dissertation Writers uk||Dissertation Proposal UK| That God have created this wonderful world how calculated

Its really wonderful expalnation about creativity of science role in our society and specially in education and here TopEssayWriting benefits for students and deliver the quality essay writing.

I really like this idea as it is among the friends which I like most in my world and I can do anythings for them.....assignment help by assignment consultant

Great I like the idea of this it totally an out standing way to increase whole the thing with slightly a nice way.essay editing by essay spot|

'Discovery' vs. 'The Orville': Who Treks Better?

Why You Should Never Buy A Writer A Notebook

Storyville: Top 10 Things for Writers to See, Do and Buy this Holiday Season