May 10 : The New Myth with Francesca Lia Block
May 17 : The Choreography of Violence with John Skipp
May 24 : Monster Mash with Gwendolyn Kiste
May 31 : Polish & Publish Your Personal Essay with Chloe Caldwell
Jun 7 : Picking at Scabs with John F.D. Taff
Jun 14 : The Craft of Character with David Corbett
Jun 16 : Grammar 101 with Taylor Houston
Jun 21 : Horror Among the Kudzu: Writing Modern Southern Gothic with Kristi DeMeester
Jul 11 : Keep it Brief with Richard Thomas
Jul 14 : The Business of Creative Writing with Lisa Bubert

Joshua Chaplinsky from New York is reading a lot more during the quarantine October 20, 2015 - 1:30pm

I want to do one of those lending library things popularized by Stephen Elliot and stolen by Rob Hart. I think it's a super cool idea that gets my book into some extra hands and gets me a nice little memento. I figured this was the best place to start.

So speak up in the comments if you want in. I'll mail the book to the first person. They read it and mail it to the next person. And so on. The last person mails it back to me. It's a short book, so it's a quick read and postage should be cheap.

I'd love it if everyone who participates signs their name in the book. And it'd be extra nice if you left a review on Amazon and/or Goodreads, and spread the word on social media. Thanks, guys!

(US residents only. Sorry.) 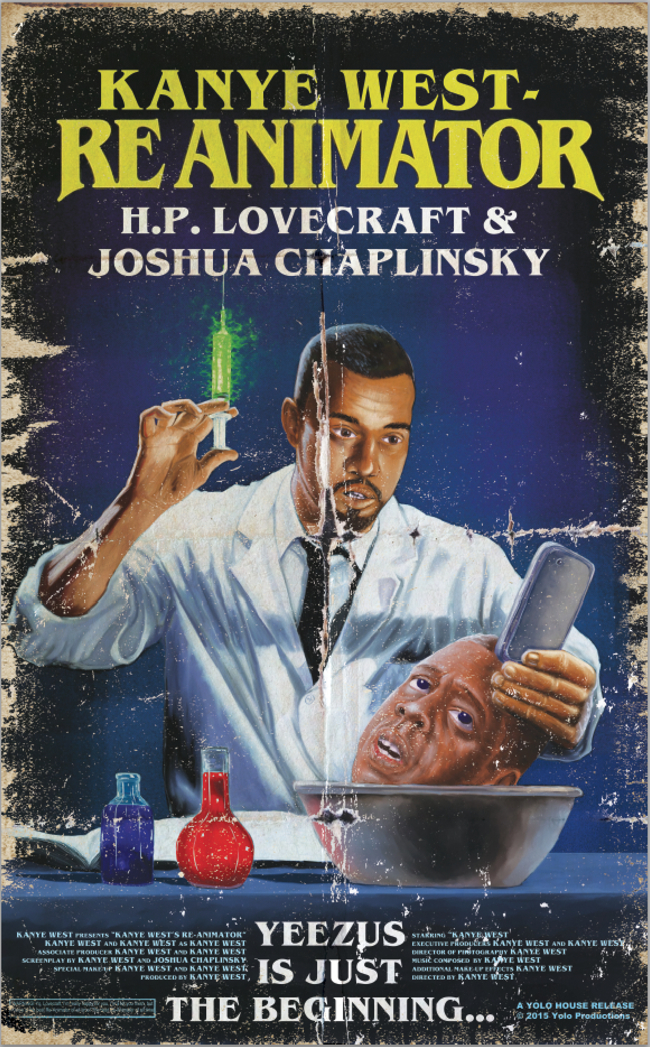 ​
Of Kanye West, who was my friend in college and after he dropped out, I can speak only with extreme sadness...


So begins this epic cautionary tale of ambition and hubris.

In it, Kanye West attempts to reanimate a moribund hip-hop scene, only to come to the conclusion that his music is so powerful, it should be used to reanimate the dead. And who better to reanimate than those two legendary titans gone before their time—Biggie and Tupac? Hilarity and carnage ensue.

Congrats on your book! A plot involving Kanye (not for President), hubris and Lovecraft with Biggie Smalls and Tupac Shakur sounds like an adventure I must read!

I don't need to be the first recipient/reader but I'd certainly love to be included in this lending process!

Agh! This totally reminded me I forgot to buy my own copy of the book. I just did though, so I'm excited for it to come in the mail on Thursday :-).

I wouldn't mind being included in the lending chain too, if people who already own the book can still be put on the list.

Joshua Chaplinsky from New York is reading a lot more during the quarantine October 21, 2015 - 5:08am

Holly: You don't need to be first, but you ARE first, and there's no getting out of it.

Anna: Of course you can still participate! Just sign the book and send it on its merry way!

Both you guys should PM me your addresses. Thanks.

Class Director
Rob from New York City is reading at a fast enough pace it would be cumbersome to update this October 21, 2015 - 9:44am

Hey! You can't steal the idea I stole!

Joshua Chaplinsky from New York is reading a lot more during the quarantine October 21, 2015 - 9:53am

The shit I can't!

I like to think of it as recycling a great idea instead of stealing...

Taylor from Durango, Colorado but living in Portland, Oregon is reading The Paradox Hotel by Rob Hart October 22, 2015 - 7:03pm

Am I allowed to sign up? I'd totally do this!

Taylor from Durango, Colorado but living in Portland, Oregon is reading The Paradox Hotel by Rob Hart October 22, 2015 - 7:06pm

I can think of 1 or 2 other people who would dig reading this and passing it along, too.

Joshua Chaplinsky from New York is reading a lot more during the quarantine October 23, 2015 - 5:08am

Of course you can. PM me your address and spread the word!

Joshua Chaplinsky from New York is reading a lot more during the quarantine October 28, 2015 - 7:09am

Hey hey, participants, please keep this thread updated as to when you receive the book and when you are sending it out, to help me keep track. Thanks.