Community Manager
helpfulsnowman from Colorado is reading But What If We're Wrong? by Chuck Klosterman March 15, 2018 - 12:42pm 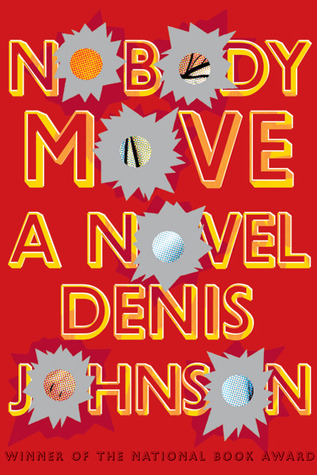 A copy of Amy Hempel's stories is on its way to user Kedzie, so it's time for our next short writing contest.

Win this one, and you'll be the proud owner of Nobody Move by Denis Johnson. It's a great book, Denis Johnson taking a crack at writing the heist novel.

The Contest:
Write a short story that begins AND ends with the phrase "Nobody Move," and post it in the comments below.

The Rules:
-One entry per person
-No more than 500 words, including the two uses of "Nobody Move"
-Tell a complete story
-Don't use something you've already written. Make something new
-Entries must be received by midnight on Sunday March 25th
-If you win, you've gotta be willing to PM me your address so I can send you a book
-Entries will be judged by a neutral third party

NicoBellFiction from America is reading The Hidden Reality by Brian Greene March 17, 2018 - 3:03pm

The End of Jenny


“Nobody move.” Jenny froze on the couch, her arms extended to keep her balance as she stood tall.  “There’s lava everywhere.”


Maddie giggled and started jumping on the recliner. “Mommy, come save me.”


Jenny tried to focus on her daughter. The living room walls blurred, but she blinked and managed to keep it in focus. Joy spread through her chest as Jenny tip-toed along the couch cushions until she reached the arm rest. “Oh, no! The lava level is rising. Give me your hand, brave explorer.”


Maddie’s smile stretched over her soft cheeks as she reached out toward her mom. Jenny’s knees wobbled as she stepped onto the armrest.


With a giant smile, Maddie thrust herself across the gap.


The room spun. Jenny leaned forward but only caught air as Maddie dropped to the floor with a thump. Tears welled in her eyes and then a wail slipped past her trembling lips.


“Oh, Baby. I’m so sorry.” But when Jenny tried to wrap her arms around Maddie, her daughter screamed out for her dad.


Footsteps trampled down the stairs. Thomas took one look at the scene, let out a curse word and scooped up their daughter.


“She’s fine. Aren’t you, Jellybean?” Jeanne tried to stroke her daughter’s hair, but Thomas turned his back.


“One hour. I just needed you to be sober for one hour while I was on a conference call, and you can’t even do that.” His eyes focused on the beer cans, crunched and flattened on the coffee table. “This ends now.”


“You’re overreacting. We were playing a game and, well, it was just a silly accident.” Jenny’s heart raced, and her palms sweated.


“I warned you.” Thomas stood, Maddie tucking her head into the bend of his neck. “I won’t allow you to poison our lives anymore.”


“You’re not taking my daughter.” She growled the words, but he only walked away. “Hey! Did you hear me?”
Jenny’s chest tightened as he headed toward the front door. Panic surged through her foggy brain as she looked around the room. The crystal candlestick holder shined in the evening light from its spot on the mantle. A wedding gift from so long ago. She grabbed it, her fingers gripping the cool crystal as she ran after them.  “She’s mine! You can’t take her!”


And as she raised the candlestick holder above her head, Jenny saw the blue of Maddie’s eyes, filled with horror.


A bang woke her. A cop stood in the open doorway, as if he’d kicked it down. Her husband lay on the floor beside her. And Maddie?


“Please, where is my daughter?” Her voice quivered as she saw the candlestick holder, now covered in blood.


The officer took out his gun, pointed it at her as her husband groaned. “Nobody move.”

Community Manager
helpfulsnowman from Colorado is reading But What If We're Wrong? by Chuck Klosterman March 21, 2018 - 11:54am

This far, I like your odds. And your story :)

Community Manager
helpfulsnowman from Colorado is reading But What If We're Wrong? by Chuck Klosterman March 25, 2018 - 7:30pm

Congrats, NicoBell! You've won. PM me an address where I can send your book.

NicoBellFiction from America is reading The Hidden Reality by Brian Greene March 26, 2018 - 5:04pm