Chuck Palahniuk hardly needs an introduction, especially at LitReactor. It’s no surprise to be getting a new book from Palahniuk—he typically releases one per year—but his new book, Consider This, marks the first time since 2004’s Stranger Than Fiction that Chuck has published a work of non-fiction. Consider This is a remarkable combination of writing advice, wisdom, and snapshots of America as seen through the readers Chuck has met while touring the country.

Consider This is something that longtime members of LitReactor, and the writing workshop at The Cult before that, have been waiting for since Chuck released a book-length series of essays exclusively to members on The Cult. (Essays, he reveals in Consider This, which were actually illegally bound, printed, and used as a guide in the MFA program at a big university.) And the final product does not disappoint. The culmination of lessons Chuck has compiled to make his writing hit harder, faster, and with maximum heart and head authority, he dispenses invaluable tips for writers looking to push further into that place where writing isn’t just consumed, but lived in and felt as deeply as a broken heart or a punch to the jaw.

Published on January 7th, 2020, Consider This is the beginning of a busy year for Chuck. Next, on April 28th, the Fight Club 3 complete graphic novel will be released, followed by the prose novel The Invention of Sound on September 8th.

Chuck was kind enough to answer some questions about Consider This.

What made you decide now was the time for a book about writing?

Of the four legendary writers who endorsed Fight Club: Robert Stone, Barry Hannah, Katherine Dunn and Thom Jones, the last one alive, Dunn, died. For twenty years I've been pressuring Tom Spanbauer (my primary teacher) to write this book of collected advice, but he wouldn't, and now his health is also failing. Rather than see the best writing lessons from my favorite mentors disappear, I wrote Consider This as a last resort.

Is there anything you wanted to add to Consider This, but didn’t have space for?

One of my chief goals was to keep the book short, i.e. readable. Otherwise I'd have included sections on cathartic fiction, how Murder on the Orient Express, for example, succeeded because it allowed readers to avenge the murdered Lindbergh baby. And I would've explored the more metaphysical events that happen when a writer models a situation so well that it becomes a new reality. Those and a dozen other topics I've started collecting for a second book, someday.

What do you think is the benefit of workshop?

Tom Spanbauer always said, "Writers write because they weren't invited to the party." Workshop gives writers a social outlet that validates the task of writing.  It also tests writing by seeing how readily people engage with the work—do they laugh, cry, or volunteer a similar anecdote?  Writing peers can also warn a writer if the topic has been explored elsewhere in the culture too recently. AND it fosters friendly competition and a pooling of knowledge regarding markets and editors where work can be submitted. Most of our friendships are based on proximity—people next door, kids in school, coworkers—but writing friendships are based on a shared passion so they endure as circumstances change.

When you open a book, what is it you're looking for as a reader?

Does the first page hook me? Whether it's the style or authority, or both, does it make me curious enough to read the next five pages? Is the voice—another form of authority—unique and worth studying? If it's the usual third-person point of view, and standard proper grammar and vocab, I'll look elsewhere for my reading.

Which do you think is more important: talent or perseverance?

The latter is more important. Perseverance. I've seen hundreds of shockingly talented writers create a story or a single book and then abandon it at the slightest obstacle. God bless them because mediocre hacks like me don't need the competition.

A lot of emphasis is put on endings. If you read a story or novel that you really love but the ending doesn't land, does that ruin everything that came before?

As in movies, the only parts that matter are the beginning and the end. Consider the long slog through the middle of Citizen Kane. How often have you fast-forwarded to get to Susan Alexander's aria nearer the end? If the beginning and end are strong we'll forgive the boring stretch between.

Many, though not all, of the rules you discuss in Consider This were taught to you by Tom Spanbauer. When you first joined his workshop, were his stylistic specifics difficult for you to grasp? If so, what did your writing look like before you worked with Tom?

Actually, I took to Minimalism like a duck to water. My background was in journalism so I'd been trained to avoid pejorative language. No reporter could get away with "He wore an ugly suit" or "The car handled beautifully." In J-school we were drilled to describe things and allow, or steer, a reader to make the value judgments. So I loved seeing this tendency validated in Minimalism.

Many of the novels and story collections that you talk about in Consider This will be mostly unknown to the average reader. Do you think that minimalism as a style requires more effort from a reader?

Minimalism requires less effort from the reader, but much more from the writer. The style doesn't allow for the short-cuts that allow a writer to quickly hammer out a story. Minimalism forces you to "unpack" all the abstracts so they're specific to just that one narrator's perspective and background.

Do you think the rules of minimalism can strengthen any writing, even if the writing is not strictly minimalist? 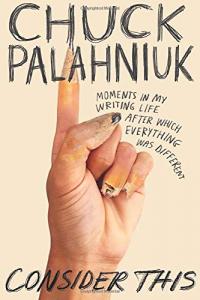 Yes, I do. If you adopt just one aspect of minimalism, limiting your elements or themes, for example, your fiction will build momentum and emotional power much faster.

What is the strangest, or most heartbreaking, thing you found atop a hotel armoire?

Sorry, I'm not saying. If the person who made it saw this, they would be devastated. Those are people's hearts up there, covered with dust.  Abandoned.

Do you still have any of the blazers that you had tailored after your therapy sessions?

Brooks Brothers coats seldom go out of style. And they wear like iron. I have them all, and wear one almost daily. That's my product placement, here.

What is one book you've reread the most?

This is debatable, but it's either Jesus' Son or The Day of the Locust, most likely the latter because I read my first copy in sixth grade. Yeah, bitter cynicism at the age of eleven.

Because you have such an acute understanding of the nuts and bolts of storytelling, do you find it difficult to surrender yourself to a story or novel? Are you constantly thinking about what the writer could have done better, or foreseeing where the story will eventually lead?

No, I seldom second-guess an author unless it's work being considered in workshop. The moment I'm not enchanted by the voice (mainly) or the plot (a distant second priority) then I bail out of the book.

You talk about "crowd seeding" stories from other people. Telling a story about something that happened to you and then listening as others tell their own versions, often escalating to one extreme or another. You mention collecting the best of these and using them within the fiction. So what is your process for incorporating those stories? Do you already have an idea in mind, then fit those stories into the plot. Or is it the opposite?

The core idea has to be my own or I'll never have the emotional investment to see it to completion. Once I know my theme(s) I can introduce it in public and see how people respond. The best outcome is when people become excited and present similar, more extreme versions of the theme, from their own lives. That proves my angst is universal.

Has there ever been a "harvested" story that was too gut wrenching or awful or sad to be used, even though you wanted to?

No. Not that I can recall. But there are stories told to me by close friends and relatives whom I would not betray. Otherwise, anyone telling such a story to a writer should know that it might be used in a larger work. That said, the priority is always, always to honor the story and not tell it in such a sloppy, summarized way that it becomes low comedy. Even “Guts”, which is based on true anecdotes and begins with some good laughs eventually lands in tragedy and wisdom. As always, the journey is through the profane to the profound. As Tom Spanbauer teaches, "Make people laugh, then very quickly break their hearts." There's the best writing advice, ever.

Tyler Jones is a horror writer whose work has appeared in the Chuck Palahniuk edited anthology Burnt Tongues, the Literary Taxidermy anthology One Thing Was Certain, and online at Coffin Bell.

He lives in Portland, Oregon.

A Conversation with Joshua Mohr About His New Novel, 'All This Life'

Bought it and loved it! Highly recommend!

Review: Dominion: An Anthology of Speculative Fiction from Africa and the African Diaspora