What feels like a million years ago but I think was more like ten, it was suggested by a publisher and editor I really respect to check out Arthur Nersesian's novel Suicide Casanova. I loved it and immediately read another of his novels, The Fuck Up. I've since become a huge fan of his work and even got to see him a few times in NYC. When I heard he'd written an epic novel in size and scope called The Five Books of (Robert) Moses, I was super excited and reached out to him for an interview.

What was it like to live inside a book for so many years? How long did it take you to write The Five Books of (Robert) Moses?

I began it on February 3rd 1993. It was strange, in so many ways the outer world seemed to be gradually moving toward my inner world.

As a writer and editor/publisher, I’m fascinated with the editor and writer relationship. You and Johnny Temple have been working together for decades—which is longer than my marriage. What is it like having such a long-term and productive relationship with an editor/publisher? 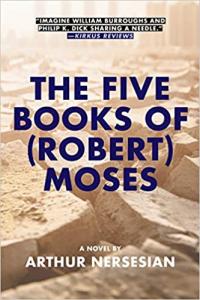 Over the years it has become steadily more professional. Every relationship is built on a certain level of trust. When a writer gets that first editorial letter it can be pretty intense. It can get messy if you blur the lines with friendship.

Following you on social media I see you’re a big fan of walking through NYC. Is this part of your writing process or just a way to stay sane as a working writer?

I definitely need a physical component to my day to counterbalance the sedentary act of writing. And the Five Books of (Robert) Moses is a very New York City-geographic book, so the walking routine undoubtedly entered my writing.

Suicide Casanova is one my favorite books of the past decade. Do you have reflections on that novel? Do you think about your older work and its characters, or when it’s done do you just move on and focus on the present work?

In regard to telling a story from multiple points of view over a period of years, Suicide Casanova was probably my best preparation for The Five Books of (Robert) Moses. Due to its sexual content it was difficult to sell. Usually when I reread earlier books, I find myself eventually reaching points where I wish I had changed the plot. To me the road untraveled always looks better.

I recently got an email that Brooklyn Book Festival will be digital this year. It’s the right decision, but it’s been tough to see so many events I love get postponed. How has Covid-19 affected you personally and professionally?

It's been a lot lonelier, which is hard if you're a novelist since it's already a solitary profession. I think people under-estimate the power of a group dynamic. It can make things more enjoyable and heighten the suspense by virtue of the crowd watching it. Now we're all “Zoom-shut ins.”

Who are some authors that have influenced your work throughout the years?

I was influenced by everyone over time, but when I first began writing, during my formative years, I really loved the depression-era writers: Faulkner, Hemmingway, Dos Passos, Nathaniel West, Fitzgerald, Saroyan, Thomas Wolfe.

I think the last time I ran into you was at The Odessa. So many of my favorite New York spots have gone under. The other day I found myself sitting at a table in the Bean Coffee Shop on 9th Street and found myself feeling so sad at the thought that my table was exactly where the old poetry section was. I spent hours readings so many wonderful works there. It was like turning an altar into a toilet stall.

What are you working on now?

I began work on what could be a historical novel, set in Russia (during the Stalinist era), which I visited in 2007, and the Woodstock Music Festival. If I finish it, it'll be my 15th book and possibly my last.  I was planning on just writing New York novels, but the New York I once knew is pretty much gone. When I would talk about the old days, once good friend kept saying, “You're olding again, quit olding.” Done.

Buy The Five Books of (Robert) Moses at Bookshop or Amazon

The Tale Must Be Greater Than The Truth: An Interview with Andrew Hilleman, Author of 'World, Chase Me Down'

You want to be an excellent student, but you don't understand everything and not everything works out, come here website annotated bibliography, they will decide everything for you and do it as you would like, and so that you are satisfied with the grades and the work performed