5 Things You Never Knew About Nathaniel Hawthorne, and Never Thought To Ask

Nathaniel Hawthorne was born on July 4, 1804 in Salem, Massachusetts. To celebrate his 212th birthday, here's a few tidbits that you may not have known about this stalwart man of letters.

1. He Wrote Comedy About the Civil War

In addition to the works he is best known for, such as The Scarlet Letter and The House of Seven Gables, Nathaniel Hawthorne penned a somewhat unpopular biography of President Franklin Pierce and wrote comedy pieces about the Civil War. His essay, titled “Chiefly About War-Matters,” was a stinging satire of the war that didn't pander to one side or other. Instead, it basically insulted everyone involved. As for the biography, Hawthorne was partially motivated to write it by his friendship with Pierce, who was actually the one to find the author's body when he died in a hotel in 1864. 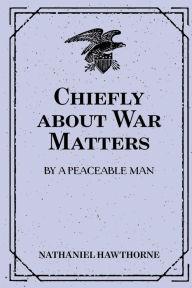 2. He Changed His Name

This one is fairly well known, but I'm slipping it in in case you've missed it. Hawthorne's family had already lived in New England for a number of generations by the time he was born and his great-great grandfather served as a leading judge during the Salem witch trials. To avoid negative associations, the novelist added a 'w' and changed his name to Hawthorne.

3. He Burned the Love Letters From His Wife

Hawthorne wrote in his diary, “I burned great heaps of old letters and other papers, a little while ago, preparatory to going to England. Among them were hundreds of Sophia’s maiden letters. The world has no more such, and now they are all dust and ashes. What a trustful guardian of secret matters fire is! What should we do without Fire and Death?” Brown professor T. Walter Herbert has speculated that this may have been because the couple consummated their relationship before marriage and there was some documentation of this in the letters. Hawthorne theoretically could have burned them to protect his wife's reputation. In a letter to her sister, Sophia Hawthorne referred to her husband's face as “celestial."

4. He Lived in a Utopian Commune and Hated it

Perhaps not the best idea for a writer who was well known for his pessimistic streak. While between jobs, Hawthorne spent a number of months at Brook Farm, a communal experiment based on the socialist ideas of Charles Fourier. Hawthorne signed on hoping to have some time to focus on writing, but he ended up spending most of that period as a designated dung-shoveler for the community. In a letter to Sophia he wrote that he hoped to leave before his soul was “utterly buried in a dungheap.”

5. He Was Close Friends with Herman Melville

Hawthorne was friends with Moby Dick author Herman Melville, who may have had a bit of a thing for him. There's no solid proof of anything more than a platonic relationship, but the passion of Melville's letters to Hawthorne have led to some speculation over the years. In his review of Hawthorne's short story collection, Mosses from an Old Manse, Melville wrote: “Already I feel that this Hawthorne has dropped germinous seeds into my soul. He expands and deepens down, the more I contemplate him; and further and further, shoots his strong New England roots in the hot soil of my Southern soul.” Read more about it here.

Do you have any opinions on Hawthorne? Whether you love him, hate him, or just want to wish him a happy birthday beyond the grave, let us know in the comments!