With the news that the CW’s Wonder Woman adaption Amazon is living in a sort of limbo— its script still unapproved (or unseen) and thus pilot unordered, the search for a lead actress an ongoing process— those of us that would love to see a good Wonder Woman show are anxious. But then, we’re always anxious.

I thought I’d take a look at some of the best things from the comics that the show should consider in an effort to get the show right and make it great. Now, right out of the gate the CW’s Amazon has something going for it that David Kelley’s Wonder Woman didn’t -- a writer/creator (Allan Heinberg) that knows (and loves) Wonder Woman. While I think most of us can admit that there was a time when Kelley’s Ally McBeal and The Practice were relatively great television shows, part of the reason they were great (before they overstayed their welcome, as shows sometimes do) was because Kelley knows what to do with a television show about the law.

While I appreciate that Kelley wanted to give it a shot with superheroes and Wonder Woman, it was clear from the script and pilot that something he didn’t know about was superheroes and Wonder Woman. The show was bizarrely pitched tonally, not knowing what it wanted or needed to be. There is absolutely a way to blend action and humor, shows do it all the time—Buffy The Vampire Slayer did it more than ten years ago, and did it almost perfectly—but what Kelley assembled just did not work in any way. So with that in mind, here are some things from the comics that might help to get us the best possible Wonder Woman, and the best possible television show.

DON’T BE AFRAID TO HAVE A SENSE OF HUMOR

And when I say sense of humor, I include a certain amount of camp and meta humor in there. Creators should look to Gail Simone’s Wonder Woman run for a Diana that exists in a world hyper-aware of itself. Simone’s combination of fish (slightly) out of water Diana with a world full of commercialism and self-aware social media was delightful. Just take this moment in which Diana discusses a “happy magic fun sword girl” statue of herself with Black Canary while browsing in a toy store: 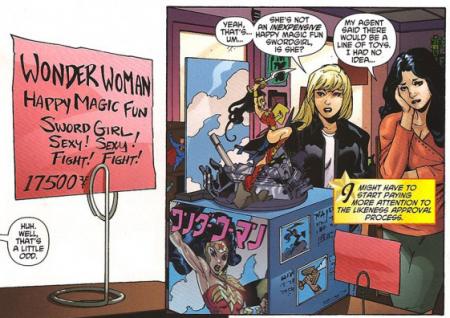 A lot of writers make Diana far too inaccessible by making her too perfect, too above us all, too stoic and humorless, too unaware of what goes on around her.  And while she’s not the funniest comic book character you’re ever likely to come across, just like most people worth knowing she still has a great sense of humor and can be funny herself, so long as you match the sense of humor to the woman she is.

One of the primary reasons that Buffy The Vampire Slayer worked and became such a smashing cult success was because they weren’t afraid of poking fun at themselves. There’s a self-awareness and camp to shows like Buffy (and Xena – which is perhaps an even more apt comparison) that is both endearing and allows an audience to groan along with it when necessary (like when the budget doesn’t give you the money you need for a special effect and it looks terrible…which you just know is going to happen). 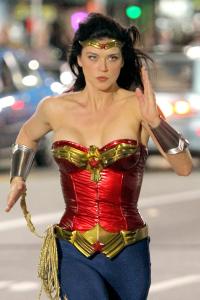 Things like this (picture to the right) look absolutely ridiculous, so if you can’t embrace camp and not take yourself too seriously, people will only be laughing at you, instead of laughing with you.

There’s no reason you can’t merge the epic and humorous. A great example of it in television is an epic rousing speech that Buffy gives to her friends/team about how they’re going to save the day, only to cut it with a joke after the fact once she’s realized she’s wearing ridiculous pajamas. “That would have sounded more commanding if I wasn’t wearing my yummy sushi pajamas.”

Learn from this. Don’t be afraid to be funny. Overly earnest material can only earn you groans and the reputation for cheese-tastic material with TV budget effects.

DON’T BE AFRAID OF THE MYTHOLOGY

Look to Brian Azzarello and Cliff Chiang’s current Wonder Woman series to see modern forward thinking takes on mythology (although please ignore Azzarello’s horrific take on The Amazons – but given the title of the show – this shouldn’t be an issue).

Mythology is ripe with the best heroes and villains you could ever hope to find. In fact, mythology is where superheroes come from, so there’s no reason to distance yourself from it. Some of it is indeed ridiculous, but if you pitch your series with the right tone, you’ll be in good shape. And Azzarello and Chiang have done an updated take on mythology - from character design right on down - that feels both smart and cool. There are infinite ways to integrate fascinating characters with complex motivations into a clever show about superheroes. Which brings us to the next point.

DON’T BE AFRAID OF POLITICS

On the surface it seems like politics would not be a great fit for a CW Wonder Woman, but if you think of shows like Game of Thrones, one of the best things about it are the complicated politics. Intricate and always keeping viewers guessing, it’s nearly impossible to tear your eyes away from both what’s happening and what you realize can (and will) happen. There’s no reason that elements of that can’t be brought into a Wonder Woman show. Creators should look to Greg Rucka’s fantastic Wonder Woman run on how to do this well.

Again, while the CW is not likely the right place for a DC based “adult” Wonder Woman show, there are politics everywhere and dozens of ways to integrate politics into any show -- from straight real world politics like The West Wing to complicated battle politics in Game of Thrones to the shifting loyalties of Homeland and even the gritty urban politics of The Wire – there are so many ways that politics can play a key part of a show in any environment - work, school, social, and beyond, and if handled smartly, it can only make a show better.

Quite frankly, it also wouldn’t hurt to flat out bring on Greg Rucka to work on this show. In an interview on the comics podcast I host, Rucka talked about the way he was planning to open his Wonder Woman: Year One comic (now being written by Grant Morrison) and it was so brilliant that it gave me superhero-like chills. It would be equally brilliant (if not more) as a TV show or film opening. Someone call Greg Rucka!!! 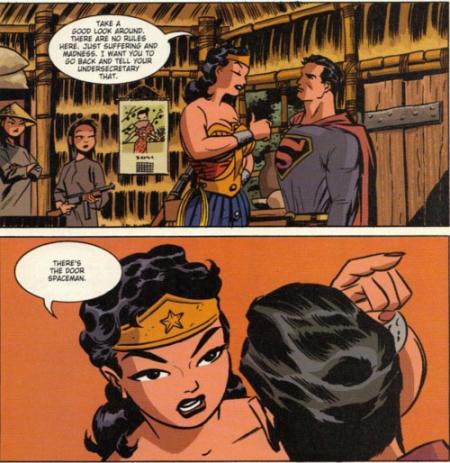 DON’T BE AFRAID OF FEMINISM

Feminism doesn’t have to be preachy or off-putting, as it’s frequently portrayed in the media. Diana comes from a warrior culture of ALL women – hell the name of the show is AMAZON – so you can’t blink on this issue.  She’s going to – and should – have a powerful viewpoint, and one that is decidedly pro-female power (which does not mean “anti-male”). A good book to look to for this is Darwyn Cooke’s The New Frontier. In TNF, Cooke’s Wonder Woman is pure Amazon from head to toe. From the visuals – she is taller than everyone – including Superman – to her moral stance and ideals, she is unequivocally portrayed as powerful and sure of herself. As any leading character we're supposed to want to follow should be. That doesn't mean she can't be wrong or vulnerable, but it does mean that at her core she's strong - not only physically but emotionally and mentally. There's nothing wishy-washy about Wonder Woman and there is simply no reason to avoid these aspects of her character. Sure, they have to be pitched correctly (nobody wants to watch Community Season 1 Britta as the star of her own show – snooze plus annoying!) – but that doesn’t mean there isn’t a way to make it work.

DON’T BE AFRAID OF DIANA’S ORIGINS

All of the traits above have been there for Diana since the beginning. Though there is a lot of “drama” surrounding her creation (William Moulton Marston was a bit of an eccentric – bondage ho!) he still constructed a brilliant superhero in Diana. While the early comics, like most early comics, don’t translate in a modern way for most people, all the roots are still there. The basis for everything Diana is, where she comes from, and what she stands for has already been worked out. So if you’re in doubt, go back to the source and check again. The work has been done for you and all you have to do is find a reasonable way to bring that to a modern audience in a new medium. Okay, so that’s not the easiest thing ever. But I have faith. I’m not sure why I still have that faith after being burned so many times, but perhaps it’s just my cross to bear as a Wonder Woman fan. A lot of us bear it. Someday we'll be rewarded...I gotta believe!

Dwayne from Cincinnati, Ohio (suburbs) is reading books that rotate to often to keep this updated February 19, 2013 - 2:23pm

I'm of the mindset Wonder Woman, like most DC characters, are just too powerful and over the top to be interesting in an on going monthly comic.

I dig that artwork.