5 Writing Lessons You Can Learn From Pop Punk

But what about punk rock’s cousin, pop punk?

I would say “bastard child” or “bastard son” or something like that, but it’s hard to say that pop punk didn’t capture the world’s attention in a big way for a few years there.

What can writers take from the world of pop punk?

What, Exactly, Is Pop Punk?

If you ask someone who’s really into music history, there are a lot of technical definitions that separate things into pop punk, punk, post punk, emo, screamo, etc. There’s some goth culture thrown in there from time to time, although that seems to happen most often in cases of “parents just don’t understand.”

For the purposes of this article, I categorized bands as pop punk with a simple 3-step verification process:

2. An overall sound that was pretty similar to pop punk.

3. Was it something I would have loved deeply when I was about 20? If yes, then it was probably pop punk.

I spent my young, enthusiastic, desire-to-wake-up-alive days going to a lot of pop punk shows. I attended more than one Warped Tour. I crowdsurfed. I moshed to songs that, in retrospect, really don’t seem to encourage moshing at all. So I know a little about the idea of pop punk, but I can guarantee that won't stop someone from shitting a brick when I list Bad Religion as a pop punk band.

Keep in mind, I’m not using the categorization of “pop punk” as an insult. I know any band you like has no business being associated with the likes of Fall Out Boy. My advice to you is to write an extremely angry comment about what a moron I am at the bottom of this article.

Any useful statement about the future should at first seem ridiculous.

Indeed, when Panic! At the Disco hit the scene, we were hearing something strange. It was a little like a group of chipmunks were on speed singing, dressing in bizarre clothes, and giving their songs titles that were impossible to remember. Titles like, “There's a Good Reason These Tables Are Numbered Honey, You Just Haven't Thought of It Yet.”

There was nothing about Panic! At The Disco that seemed reasonable.

And yet, it worked. It all worked. Panic! At The Disco was (and is) a huge band, and what once sounded Pretty Odd has become a sound we’re all used to, a sound countless others imitate.

The lesson: Like McGonigal/Dator said, a good, forward-looking idea is almost guaranteed to sound crazy. For Panic! At The Disco, that truth was very literal. For you and your writing, it might not be as literal, but the lesson still applies. Don’t stop what you’re doing because it sounds ridiculous. You might just be hearing the future.

It’s Okay To Be Fun

The first exposure most people had to Blink-182 was a music video that featured the band running around naked.

Something being popular and trendy doesn’t preclude its being meaningful.

Blink-182 was a big contrast to a lot of the punk bands that came before. Punk music, it was like a shot of bourbon, which is awesome most of the time. But every once in awhile you’re sitting outside, it’s 90 degrees, and you’re thinking, “Something boozy and fizzy and cold sounds pretty refreshing right now.” So you order that cucumber limeade and quickly dispose of the umbrellas and fruit wedges and other stuff adorning the glass. Because, you know. You’re a tough boy.

Whether you consider pop punk to be a product of the punk movement or think it's got more to do with the rise and fall of grunge, bands like Blink-182 reminded a lot of us that it was alright to create music that was fun.

The lesson: Fun is a legitimate purpose for writing. Not only does something fun have potential on its own, but it can add poignancy to your serious stuff (as it did for Blink-182 with “Adam’s Song”). A lot of us write with groups that do very serious work about serious stuff, and that's awesome. We’d all do well to remember it’s alright to have fun too.

Don’t Let Your Last Work Define Your Next One

There are a lot of bands out there who struggle with this. On the one hand, they created an album that people loved, it sold a ton of copies, and there’s a huge, built-in group of folks who want more of the same.

On the other hand, that band might want to make something new.

I look to the band Brand New on this one, the group from Jersey who became quieter and quieter on the personal front as their albums grew louder and louder. Each time Brand New released an album they sounded like a completely different band. The five-year span between Your Favorite Weapon and The Devil And God Are Raging Inside Me might as well be a lifetime.

For my money, both are great albums, as is the one between, Deja Etendu, and so is Daisy, and I really like Brand New, you guys.

The Lesson: If you write something really good, people will expect more of the same from you. They’ll want it, even if they don’t say it in so many words. That said, you shouldn’t feel tied to doing something you don’t want to do. If you wrote your thriller and it’s out of your system, it’s okay to move on and do something totally different. It’s okay to have more than one fanbase. It's not the easiest road, but it's A road. 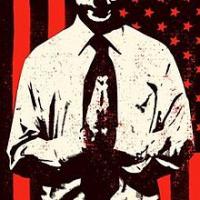 You Can Be Trendy And Still Do Something Meaningful

In 2004 Bad Religion released The Empire Strikes First. It was their 13th studio album and their highest-charting at the time.

This is the one I feel like people will have the hardest time seeing as pop punk, so I’ll keep it quick: in 2000 Bad Religion spent three months touring arenas, opening for Blink-182. They also played Warped tour in 2004 (amongst other years). In 2004, “Let Them Eat War” from The Empire Strikes First appeared on the album Rock Against Bush vol. 2 alongside some decidedly punk bands in addition to pop punk staples like Sugarcult and Yellowcard.

I’ll give you this, it’s a mixed bag. Two years from now Bad Religion will be 40. If it were a person, it would be time to schedule regular prostate exams. To categorize them as any one thing is tough.

If we can put aside our musical differences, there’s a great lesson to be learned from The Empire Strikes First.

The Lesson: Something being popular and trendy doesn’t preclude its being meaningful. There’s a Venn diagram where one circle encompasses things that are trendy, one circle encompasses things of substance, and then there’s a healthy swath where those two things cross over. There's also a brown spot on the diagram. Ignore that. That's sauce I spilled.

Bad Religion is a great example of that swath where trend and substance meet. Bad Religion has always created music that's energetic, melodic-ish, and their stuff always sounds like, well, music. There's an undeniable whiff of pop, even in some of their earlier stuff.

When you’re writing, you can write in any style, or you can write about something that's trendy (sparkly vampires, anyone?), and you can also write something important and meaningful.

My Chemical Romance announced their breakup in early 2013:

We've gotten to go places we never knew we would. We've been able to see and experience things we never imagined possible. We've shared the stage with people we admire, people we look up to, and best of all, our friends. And now, like all great things, it has come time for it to end. Thanks for all of your support, and for being part of the adventure.

It seemed like a bit of an odd move, like they were quitting when they were at the top.

Many a band have waited for external confirmation that it is time to hang it up, via ticket sales, chart positioning, boos and bottles of urine—input that holds no sway for us, and often too late when it comes anyway.

The Lesson: I don’t think I’ve ever seen this piece of advice given to writers before: It’s okay to hang up your spurs. If you’re done, if you feel like you’ve accomplished what you wanted to accomplish as a writer...it’s alright to do something else. Or nothing else.

The lesson here, the important bit, is that My Chemical Romance called it quits when they were finished. Not when the world was finished with them. I’m not advocating that any struggling writers give up. I’m saying that if you’ve struggled on the page, triumphed, and if you feel your struggle is complete, then it’s alright to let go.

Okay, now you can get angry in the comments.

I love so many of these bands and I think you've found a fun way to make some good points. That being said, MCR breakup was and will forever be a tragedy. The only consolation I have is Brother off Way's solo album is one of the best songs ever. Lyrically, it inspires me to write - every time.