Ah, the great white whale. We all think we know him, but chances are pretty good that you don’t know Dick.

Moby-Dick is one of those books that many people seem to think they’ve read but actually haven’t. They figure they read it in school, or at their grandparents’, or ten years ago during a vacation, etc., but when you ask them anything about it, they go blank and say they remember the opening line and guess they stopped somewhere after that.

It’s understandable. It’s a fucking beast of a book. Starting it feels like a commitment. And when you’ve heard people say it’s long and slow and boring, it’s too easy to assume that’s true and give up before you even start.

Even as someone who loves big, challenging books and, well, classical whaling (I have no idea why, but it’s fascinated me since I was little), I still let societal impressions put me off giving it a try. Let me tell you, I read this book like the pages were on fire and I had the word’s last copy.

Why the hell did I wait so long? It's smart, funny, queer, fascinating, the list goes on and on. Writers, especially, should read it. You should probably *actually* read it, because there’s a good chance it’s not quite what you thought it was either, and if so, you’re missing out. Here’s why.

Funny? Melville? Yes, truly. I no-exaggeration laughed out loud by myself many times. At other times I read passages aloud to my husband to share the joy. Melville’s humor is quirky, playful, and clever. It’s sly and almost… goofy? There's some good satire, too. And this from the creator of the moody Ahab. Who’d have thought?

Having “dick” in the title, filling the book entirely with men, and talking constantly about sperm, sperm, that glorious sperm was not an accident.

Knowing very little about the novel before I read it, I assumed it was old, stuffy, and uptight. But, ya know, after having read it I’m 100% sure that having “dick” in the title, filling the book entirely with men, and talking constantly about sperm, sperm, that glorious sperm was not an accident. If I had known how freaking queer Moby-Dick is, I’d have read it years ago! Ishmael “marries” the Polynesian cannibal Queequeg in the first section of the book, after a night of snuggling in bed and before ever even getting on the ship. Speaking of ships, I shipped Ishmael and Queequeg so hard it hurt my heart a little. They are genuinely sweet and endearing. (And Queequeg is badass. I love him.)

I almost made a section about how Moby-Dick is progressive, but it’s only progressive in fits and starts. Like many old books, it’s also racist AF and “problematic” in plenty of ways. BUT, it’s nice and gay so we can ignore some of that, right?

Okay but don’t let me talking about its surprising sense of humor and queerness throw you off course too far; this book is also as epic as you’ve probably heard. Perhaps more so. YMMV, but for me that epic-ness was absolutely earned and thrilling. We travel all over the world, span years, explore dozens of topics, follow many interesting characters, and, of course, pursue the ultimate hunt. The whole time I was reading I felt buoyed, exalted, but also made small, in that way that great things sometimes make us feel. Like floating under the shadow of an enormous whale tail. I loved it.

If you know anything about Captain Ahab, you probably know that he’s one moody mofo. His relentless pursuit of the white whale drives the novel, dragging all of the other characters along with him. But did you know that the book itself is moody too? Ahab’s tumultuous emotions certainly set a tone, but the book takes them and runs with it. Guided by Ishmael’s narration (among, ah, others?), we fall asleep in the crow’s nest, see the ship struck by lightning, enjoy too much booze, work hard, slack off, study up, and get caught in dangerous storms. The book can be long-winded, certainly. But boring? I don’t see how. 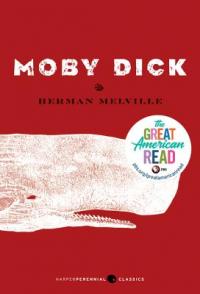 Which brings me to what I love the most about Moby-Dick and Melville’s writing. It is on fire. There are times when the reader may not know exactly what Melville is doing or why, but we do know that he’s doing it on purpose. His purpose is the kind that would cause a writer to draft in a frenzy without eating for days, or toil over decisions for years, or both. It’s like touching a livewire, even if that passion doesn’t match our own.

It’s a Masterclass for Writers

Due to the above, and more, this book is a should-read for all writers concerned with craft. It breaks so many rules that it would likely never be published today, but then, what classic would be? Moby-Dick is one of those great pieces that’s worth study, even if you don’t happen to like it personally. How, for example, does Melville pull off a first-person narrator and an omniscient narrator and a few third-person narrators? How does he spoil Queequeg's fate so early in the book but still maintain tension? How does he take so many plot detours and still find narrative drive?

You Probably Don’t Know How It Ends

Last and least, because a good book should be good regardless of spoilers, there’s a pretty good chance that you don’t actually know how it ends. I did an unofficial social poll to confirm this, and indeed, most people don’t feel confident about whether Ahab ultimately catches his white whale or not. Considering that the phrase has become common in our language, isn’t it wild that so many of us don’t know what it implies? You could look up the ending on Wikipedia, yes, but I hope you don’t. I accidentally avoided spoilers for 33 years, and the payoff was absolutely thrilling. If you’re lucky enough to have the same, then read this novel soon, and enjoy.

Have you read Moby-Dick? Are you sure? If so, what did you think? If not, are you going to give it a try?

Get Moby-Dick at Bookshop or Amazon