I'm a huge fan of word- and story-based games. Whether you're looking for a (belated) gift for your favorite writer or you're finally getting enough time off that you'll have the chance to play word-nerd games with friends and family, this is definitely the season for playing. I'm going to show off eight of my favorites and tell you why these games are especially great for writers. 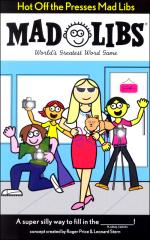 Why it's great: I imagine your first experience with Mad Libs was similar to mine: On a road trip, someone in the family pulled out a stack of Mad Libs, explained what "adverbs" and "nouns" and "adjectives" were, and you proceeded to find ways to use every scatological term your young mind had held onto. The end result ("The [poop] farmer and his wife, [Butt-Face], were in the [smelly] town") never failed to amuse you. Well, believe it or not, Mad Libs can be fun even when you're using a grown-up vocabulary. What's more, the company has now put out dozens of "scenarios," including Mad Libs Armageddon, Christmas Fun Mad Libs, and even Star Wars Mad Libs.

Why it's great for writers: Even experienced writers sometimes fumble when it comes to terms for sentence dissection. Knowing the terminology for discussing various descriptors and sentence parts improves your communication with other writers, especially in workshopping scenarios. 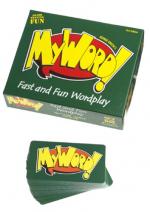 Why it's great: The concept of My Word! is simple: Cards are laid out on the table, and each player puts together words using the available cards. When they find a word, they shout it out and gather the letter cards that make up their word. A few extra rules help to energize gameplay: words have to be at least three letters long, some cards have more than one letter on them, and "wild cards" can be used for any single letter you'd like. The game is simple, portable, fast-paced, easy to pick up on, and has short enough rounds that it can be played for as little or as much time as you'd like.

Why it's great for writers: As with many of the word-hunting games on this list, My Word! helps you expand your vocabulary and perfect your spelling. The hunt for less common words also helps you shuffle up your own linguistic tendencies.

Why it's great: This game may be something of a time commitment, but it's also a tried and tested classic. Yeah, much of the game's strategy comes down to how effectively you use the letter "S" and take advantage of multipliers. Still, the slower pace of the game lets you try out limitless combinations of words, and there's a powerful sense of pride that comes along with playing the word "caziques" on a triple word tile.

Why it's great for writers: Yes, you'll improve your spelling and expand your vocabulary. Plus, as you figure out existing words can be expanded into longer words, you'll learn a bit of etymology. 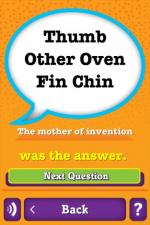 Why it's great: While there are different modes of gameplay, each centers around a card with a nonsensical sentence being shown to players. The players then have to figure out that "rye doubt these dorm" is vaguely homophonic to "ride out the storm." Players get points by guessing the true phrase correctly, and both the cards themselves and the incorrect guesses can be hilarious.

Why it's great for writers: The great thing about Mad Gab is that it lets you see the ways that different sounds combine, both within and between words. This sense of the phonic, or even lyric, qualities of words can improve your micro-level writing. And while you should be careful about taking a Mad Gab approach, the sense of how words are actually spoken can improve your ability to write in dialect. 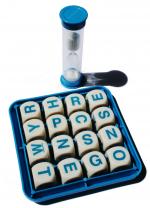 Why it's great: You probably already know Boggle, which is good ... because it's a hard game to describe for those who haven't played it. Here's my attempt at oversimplification: A randomized set of 16 or 25 letters are put out in a square. (There are dice involved in this randomization process.) A timer is set and all players start hunting for words within the letters shown on the dice. You can write out these words by connecting letters in any direction, but you can't use the same letter more than once and you can't skip over any letters. At the end of the round, each player reads their list of words and only gets points for words that no other player found. And ... if you haven't played this already, just trust me: It's more fun than my description makes it sound.

Why it's great for writers: Expand your vocabulary, perfect your spelling, figure out different ways words connect, and get a taste of etymology.

Why it's great: Tabletop RPGs put you into either the position of GM or player. As a GM, you narrate the overall story and create the gaming world. As a player, you create a character, take on that character's role, step into the character's mindset as you try to solve problems, fight bad guys, and save the world (or not, depending on the sort of campaign you're in). There are many great tabletop RPGs out there, but my favorite in the fantasy category is Pathfinder. Dungeons & Dragons has been through many iterations, and in its most recent "step forward" (into its 4th edition) it tried to copy MMORPGs. This didn't help them on the storytelling and character development front. Pathfinder took the existing 3rd edition D&D gaming system and re-balanced it for smoother gameplay. It's a solid game, more affordable than many of the alternatives, and less gimmicky than the core D&D brand.

Why it's great for writers: Rather than trying to detail all the benefits I believe this sort of game has for writers, let me point you to the article where I talk about the seven things tabletop RPGs taught me about storytelling. 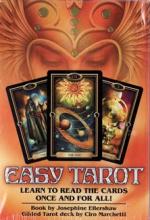 Why it's great: There are plenty of people who would question me calling tarot a "game," but it's a bit difficult to classify without making it out to be some obscure and religiously entrenched practice. While some pagan groups have adopted tarot, the core of reading the cards is found in symbols. Tarot prompts the reader to connect non-verbal sets of symbols into meaningful patterns. I use tarot as a sort of art therapy; it's what I read, not what is written, that has significance. Whether you're reading your own tarot or reading for friends, using these cards can become a fascinating creative exercise.

Why it's great for writers: I've previously described ways that tarot can be used for metaphor exercises. No matter what sort of writing you do, you will benefit from practicing your ability to use metaphor and artfully synthesize diverse ideas. 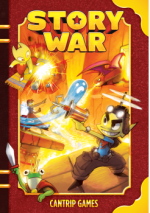 Why it's great: Story War is a recent indie game that reached 1816% of its original funding goal on Kickstarter. Since my word-nerd buddies and I picked it up, Story War has become our go-to game. It's something like the bastard child of Apples to Apples and Dungeons & Dragons. Once the battleground setting has been revealed for the round, players select a creature card from their hand to do battle with the creatures selected by their opponents. Players make claims about why their creature should win, and the round's narrator gets approval / veto power over those claims. The round is over when the narrator decides which creature has won.

These rounds can be fairly simple; e.g., the narrator accepts the justification that the giant has the home-field advantage on the beanstalk battleground and thus deserves to beat the wizard. The rounds can also be wildly complex. One of the recent matches my friends and I played went into an extended narrative of how the pixie, bugbear, witch, and bone dragon did battle at the carnival. Obviously, the pixie won by throwing a stolen healing potion into the skull of the bone dragon, whose brain (which was made up of pure electrical energy) instantly evaporated that healing potion, which caused the healing vapors to destroy the top of the bone dragon's skull (since we'd decided that traditional rules for undead, including being harmed by healing magic, applied), which caused the dragon's electric brain to blast heavenward as its draconic skeleton collapsed, lifeless, to the ground.

Why it's great for writers: This is creative storytelling with a humorous twist. The spontaneous and collaborative approach to telling a story helps stretch your creative muscles, and the focus on battle narratives can be especially helpful to those looking to improve their fictional violence.

Rob is a writer and educator. He is intensely ADD, obsessive about his passions, and enjoys a good gin and tonic. Check out his website for multiple web fiction projects, author interviews, and various resources for writers.

10 Stories We Never Need to See in Workshops Again

My Word! sounds fun. I really love Scrabble Slam, which is kind of similar. Mad Gab also sounds like fun. I've been looking for word games for testing days, so my students who already passed their state tests can be rewarded with a little down time but still be doing something geared toward English. I also like Scattergories, Apples to Apples, and Cards Against Humanity (which my students can't play in class, haha).

Wordie Wards (a game I bought on the Mental Floss website) is great. Also, Scattergories.