Consider the comic store and the bookstore. Their relationship has been one similar to that of a snob and a slob in a snobs versus slobs comedy. Bookstores, represented by snobs, have been on top for a long time. But now, now that time has moved on and the movie has nearly finished, the slobs are on top. Alliances have been re-formed, Camp Whatever has been saved, and the snob looks to the once lowly slob to figure out how to exist in this new, topsy-turvy world.

Indeed, June 2016 was the best month for comic book sales since 1997! And not only are comic books flying off the shelves, but more and more, comic book stores are thriving. Nerd culture is huge, comic conventions are busting at the seams. Things are going swimmingly for the once slovenly slob.

I love a good bookstore, don't get me wrong. But there's always room for improvement, and there are a handful of lessons bookstores could learn from their colorful, superpowered, continuity-obsessed cousins.

Jay and Silent Bob’s Secret Stash was a place I wanted to visit since I was a teenager. On my first trip to NYC, I took a train from the city out to New Jersey for the sole purpose of walking through the front doors of The Stash. Think about that. My entire reason for leaving the city that never sleeps, my entire reason for entering another state, my entire goal was to hit a comic book store. Not to buy a specific thing, not to seek out certain key issues. To hit a destination.

Meltdown Comics in Los Angeles has a podcasting studio, home of none other than the Nerdist Network. It’s a thing.

More than one comic store is attached to an art gallery. It’s a thing.

Comic stores have learned the value of having a thing. Something that brings people into the store, possibly for reasons unrelated to the books.

Bookstores, far too few of you have a thing. What's gonna be your thing?

Is there room in your shop to be the last holdout for pogs? Just sayin’.

Could you, for a pretty reasonable investment, devote a corner of your store to becoming the first Demolition Man memorabilia museum in the world? Could you PLEASE do that so I can come to your bookstore?

Could you have a hermit crab who does fantasy baseball predictions? Just sayin’.

I’m just sayin’, you can have a thing.

Author readings, book clubs. This covers most of the events at your average bookstore.

Why wouldn't you hold a cat rescue adoption fest in your bookstore? Oh, right. Because you're a monster. I forgot.

"Snooze." "BO-RING." That covers most of the reactions I have to those offerings.

I’m looking at my local comic book store, and they have gaming events 3-5 times A DAY! Including some game nights they sponsor at a local distillery. Their event calendar looks like the fantasy social calendar of the world’s busiest, most intoxicated dweeb.

My town is not that big. We have no business having a store with this many events.

The aforementioned Meltdown Comics has a small theater attached, and they do comedy shows, open mics, acting classes. They host all kinds of different stuff, most of it barely related to comics.

Events bring people into the store. When they’re in the store, they buy things. This is simple math.

You may not be able to support 3-5 events a day, but you might look at increasing both the quantity and variety of your events.

Get That Pre-Order Game Strong

Anyone who’s been in the comics-buying game for a while knows how it works. You get a Previews guide, check out what’s coming in a few months, and then make your orders through your comics shop.

This is the preferred way to buy comics. You get your books in hand the day they come out, you know they haven’t gotten all fucked up from being on the rack, and most times you’ll get a discount.

Bookstores, ya’ll need to get that pre-order game together.

Put out a sheet every month that tells me what I can pre-order. I want covers, I want synopses. Hell, you might even take the route of some comic stores and create your own newsletter, do some hand-picking and generate excitement that way.

Pre-ordering is such a great way to both please and trap your audience. Make it a big part of your business.

Your Staff is EVERYTHING!

The people at Midtown were nothing like my made-up Jodorowsky jerks. They were so, so nice. Someone welcomed me into the store, and when I couldn’t find what I was looking for, not only did the staff member know where it should be, but when we didn’t find it, someone knew who to call and how to get what I wanted within a couple days.

Those that didn’t get what they were looking for consistently rated their interactions higher, and they were more likely to seek help from the same resource again EVEN THOUGH THEY DIDN’T GET WHAT THEY NEEDED.

Take heed, bookstores. The experience is a lot more than the books on the shelf. A great staff can make a repeat customer of someone, even if they don’t always get the books they want.

There's no room in the comics game for the surly comic book guy anymore, and the days of the surly bookstore clerk are coming to an end. 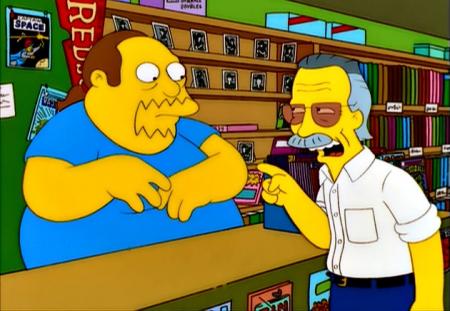 Be part of the community. It’s important.

Isotope Comics in San Francisco did a comics-making class for Girl Scouts. Whose cold heart isn’t warmed by that?

Every protest needs a staging area. Why wouldn’t you provide a warm place for people to start or finish, and maybe some materials and know-how to make kickass signs?

Why wouldn't you hold a cat rescue adoption fest in your bookstore? Oh, right. Because you're a monster. I forgot.

If you’re a comics shop owner, you’re used to the slings and (Green) arrows that come along with dudes in their underpants being the main draw to your store. You’ve almost certainly made peace with the idea of Maus being shelved next to My Little Pony.

What gets prime real estate at the comics shop? Whatever sells.

Meanwhile, far too many bookstores are all caught up in Lit-Ra-Tour being front and center. They push their ideas of which books are big and important, and they stuff some of the highest-selling books into the back corners. Romance, thrillers, horror, sci-fi.

If you visit bookstores, and if you read genres that come in mass market size, you’ve been in a lot of bookstore basements. You've perused many shelves near a bathroom. You've feared for your life in dank corners that make you wonder if you accidentally opened a Hellraiser puzzle box. I’m not kidding, I was in a pretty nice bookstore last year, and when I was standing near the books I liked, there were two dead roaches on the floor. Well, 1.75 dead roaches. It looked like maybe the one died and the other one...you know what? Never mind.

Bookstores, get over yourselves. If you have the shit on the shelf, then you should be willing to put the shit front and center. Don't roll your eyes at a purchase, and don't do an eye-roll-by-proxy by cramming stuff out of sight.

Don’t be afraid to send the message that your store is for all kinds of readers.

In the world of comics, there’s this spectrum. You have your collectors who care about the condition and value of a book. And you’ve got your readers who mostly want to read the shit. As is the case with most spectrums, most of us fall somewhere in the middle, doing some reading and some collecting.

Comic book stores sell to this entire spectrum. Any comic book store worth its salt has new books, trade paperbacks, and then some wall books, valuable books displayed up high so that we can all see them, pine for them, and maybe buy them.

We want both. We want our cake, and we want to eat it. I mean, what else are we supposed to do with cake? Stare at it? Duh. That’s a stupid saying.

Get your high end stuff, and get your low end stuff. Get you an inventory that can do both.

This one's quick. When you go into a comic book store, almost all the books are front-facing.

Sideways books send the message that they’re filed away, already in the place where they belong. Front facing books say “Pick me!” Or, sometimes they say “Miss Jane” because that’s the title of the book. Plug.