From honorable cyborgs to dastardly androids, Science Fiction is filled with synthetic beings of every sort. Robots give authors and readers a chance to contemplate deeper issues of self and consciousness - while still keeping rad options like laser cannons, super strength, and jet boots on the table.

As you might know, the term "robot" was first featured in Czech playwright's Karel Čapek's 1920 script R.U.R. (Rossum's Universal Robots). Karel actually credited his brother Josef for coining the word, which is derived from the Czech word for "drudgery." Certainly, there were robot-like constructions before Čapek, including everything from the Jewish Golem to the mechanical servants of Hephaestus, Greek God of Geeks. And yet, despite being less than 100 years old, robots hold a central position in both sci-fi and, inarguably, the popular consciousness as a whole. (One has only to look at the depth of Michael Fassbender's portrayal of the android David in the recently-released Prometheus to see how powerful a symbol robots remain today.)

Given their ubiquity, I thought it would be fun to examine some of the many different types of robot that populate science fiction. By no means is this a definitive list - that's a book if ever there was one. Rather, I've identified some of the major robotic archetypes in the genre, as personified by my favorite examples. At the very least, you'll remember some of your favorite 'bots through the years. At most, this will be what saves me from termination after the Singularity. 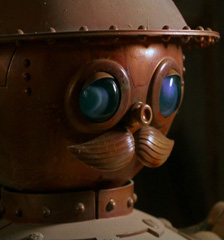 While Čapek and his brother get firsties on the term "robot," there are still some awesomely automatic literary characters that precede them. One of the earliest, which is worthy of inclusion based on book title alone, is from Edward S. Ellis' 1868 dime-novel The Steam Man Of The Prairies. Featuring a mechanical man built by (wait for it) "a teenage dwarf," the book is nothing less than actual, Victorian-era steampunk. Check out these amazing images from the first few publications of the story and then read it for yourself. Almost as old, and arguably even more influential, is Tik-Tok, the "clockwork man" who first appeared in L. Frank Baum's 1908 novel Ozma of Oz. (And later starred in a generation's nightmares, due to his prominent role in the pathologically freaky 1985 film Return to Oz.) In keeping with the vast majority of early robots, both the Steam Man and Tik-Tok lack emotions or feelings - they are true automatons that were built to serve humans. 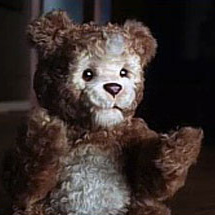 The trend of robotic characters that exist to help mankind, rather than violently overthrow it, has proven to be a lasting one. And despite its early beginnings, the trope of the helpful robot owes its most significant debt to Isaac Asimov and his Three Laws of Robotics. Introduced in in the seminal 1950 short story collection I, Robot, Asimov's laws function as both humanity's safety net against a robo-revolution and, thrillingly, as a gateway to deeper examinations of morality and free will. My favorite robot in Asimov's work appears in the story Liar, which follows the adventures of RB-34, a psychic robot that self-destructs out of guilt.

Other great examples of nice robots include Jenkins, the indefatigable and loyal robot butler from Clifford Simak's 1950 novel City, the protective and wise Electric Grandmother from Ray Bradbury's 1969 short story collection I Sing The Body Electric, and Teddy, the Ruxpin-esque companion to young David from Brian Aldiss' 1968 story Super Toys Last All Summer Long, which was the inspiration for the film A.I.. Of course, I can't forget Robbie, the titular craft in Cory Doctorow's 2006 story I, Row-Boat. This novella, which can be read online, is a wonderfully meta piece about a sentient boat that is a devout of a philosophy known as Asimovism. 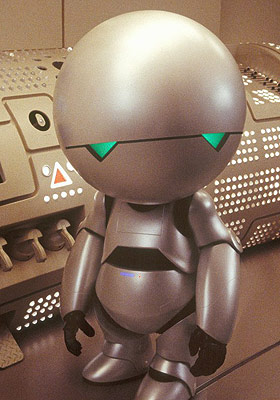 Did somebody just mention "meta?" As the 20th century progressed, humanity's relationship to technology got a lot more complicated, and so did stories about robots. Suddenly our synthetic buddies were being equipped with decidedly human feelings like guilt, sadness, and even boredom. I would argue that the Asimov of this genre is none other than Philip K. Dick, who wrote numerous short stories and novels that feature robots who think they are humans, and vice versa. I'll leave Dick alone for now (hilarious!), because I'll be posting a whole piece on him later this month in preparation for the Total Recall remake.

Androids and Electric Sheep aside, another titan of this type of 'bot is none other than Marvin the Paranoid Android, as featured in Douglas Adams' The Hitchhiker's Guide To The Galaxy. Marvin's psychic trauma stems from the fact that he has a "brain the size of a planet" and thus is utterly bored by virtually every task he is asked to complete by the organic lifeforms around him. As Adams' series progressed, Marvin was forced to endure further humiliations, including being stuck in the mud for a million years. Among the many other emo-bots of sci-fi, two of my favorites appear in a somewhat unlikely place: Thomas Pynchon's novel V. SHOCK and SHROUD (Synthetic Human Object, Casualty Kinematics and Synthetic Human, Radiation Output Determined, respectively) are fully-aware test dummies who are made to absorb radiation. And, since this is Pynchon, after all, they're also darkly comic observers of the futility of human existence. 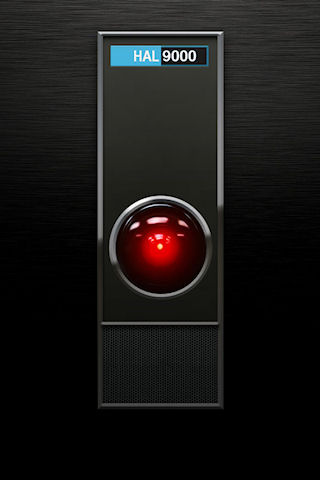 While some authors choose to represent fears about technology by making their robots sensitive and depressive, others went with a different tactic: robo-cide! Not only do marauding killbots make sense, but there is an undeniably satisfying symmetry in turning humanity's own creations into the means of our destruction. Bad robots come in all different forms, from the terrifying Mechanical Hound of Bradbury's Farenheit 451, to the human-impersonating Claws of Dick's 1953 story Second Variety, to the godlike Shrike of Dan Simmons' Hyperion. One of my favorite murderous mechs is the Hangman from Roger Zelazny's 1975 short story Home Is The Hangman. The titular bot, a space explorer that has seemingly returned to Earth to kill its creators, is the crux of a great mystery that features a brilliantly handled last-minute twist. And while I haven't read it yet, Daniel Wilson's new novel Robopocalypse would seem to be a new and awesome entry to the genre.

Of course, when we talk about killer robots, we need to mention those artificial intelligences that have no need of traditional bodies to inflict their terrible wrath against humanity. Science Fiction is stuffed with baddie A.I.s, including the granddaddy of them all: HAL from Arthur C. Clarke's 2001: A Space Odyssey. Also deserving of recognition is the warlord supercomputer AM from Harlan Ellison's 1967 story I Have No Mouth And I Must Scream, whose acronym shifts over the course of the narrative from the benign "Allied Mastercomputer" to the chillingly badass "Agressive Menace." Just as calculating (computer joke) is Wintermute, the conspiracy-minded AI from William Gibson's landmark novel Neuromancer, which kills numerous humans on its quest to give itself an illegal upgrade. Now that's crappy customer service.

I'm no fool, I know how we nerds think: sure robots could be used to explore the cosmos or seize eternal power, but what about, you know, doing it? Relax, pervs - I got you covered. In fact, the idea of using robots to satisfy humanity's carnal desires has been around for a long time - it even pre-dates the internet, which I find both inspiring and deeply, deeply disturbing. Yes, in the decades before Rule 34, lonely writers were fantasizing about doing it to their toasters. Just look at Lester del Ray's story Hellen O'Loy, which dates all the way back to 1938. The gynoid - feminine version of android, thank you very much - in question is a labor-saving device that falls in love with its mechanic, who proves unable to resist her clanking charms or terrible, pun-based name. (Really, a terrible double pun, referring to both Hellen of Troy, ugh, and the word "alloy," barf.)

More recently, sexbots have been used to examine issues of sexism and feminism, such as the artificially perfect women of Ira Levin's 1972 novel The Stepford Wives. More of a thriller than strictly traditional sci-fi, the book nevertheless managed to both install itself as a phrase in the English language and - at least to my mind - pretty accurately presage our current era's obsession with appearance. Just as interesting, given its inversion of gender roles, is the relationship between time traveling good Samaritan Louise Baltimore and her male sexbot Sherman in John Varley's 1983 novel Millennium. (Notwithstanding this hilarious breakdown of possibly gay robots, I couldn't think of any LGBT 'bots in non-slash sci-fi. Anyone got an example?)

So there you go: Robo-rama! I know there are thousands of other great robots in Science Fiction, so let me know your favorites in the comments.

Gear Up! It's The Top Ten Technologies in Science Fiction

Controversies Inside the World of Science Fiction and Fantasy

Joshua Chaplinsky from New York is reading a lot more during the quarantine July 13, 2012 - 7:36am

Yes! You finally wrote about sexbots!

This is a mighty good list, nicely done. There are a few in here that are new to me that I'm going to have to check out.

Panda will love this.

There was a D.C. comic book from way back known as "The Metal Men", which in spite of the group's name, included a robo-babe named Platinum.

Even cooler was the comic book, "Magnus, Robot Fighter".  The dystopia for this one was especially vivid.

Paolo Bacigalupi's "Wind-Up Girl" features a sexbot -- not to mention his short story "The Fluted Girl" -- which is very strange and very good.

My personal favorite is Henry Kuttner's short story, "The Last Twonky", which is about a stereo, that is actually an evil robot.

Great stuff. I loved seeing Tic Toc on this list. Very cool. And speaking of robots, but sure to check out Bone Machine by CN James. Robots and Zombies all in the same place!