Maybe it’s just me who's been seeing a lot of writerly complaints lately. Mostly about how hard it is to write.

Truth be told, we're damn lucky. It's never been easier to write.

Let's wipe out one more excuse to NOT write by looking at how hard it used to be to type words onto a screen and turn them into a book.

It might surprise you to find out that computers and word processing developed separately, on their own, in parallel, before someone got the wise idea to use a computer to create editable documents. Maybe to say that might "surprise" you is a little strong. I'm guessing no readers just shit themselves here.

One of the first popular word processors, the Vydec Word Processing System, which let you type, edit, save to floppy disk, and print, cost $12,000. Which is like $60k today. Cha-ching.

Wang Laboratories made a more reasonable system that was sort of the grandpappy of what we see today. It was a hell of a lot more affordable, and besides, who can put a price on “wang” jokes? (By the by, if your name is "Wang" and you don't care for wang jokes, my name is "Peter." How a name from the Bible came to mean "penis" is a total mystery to me. Also, I have to deal with "Petering out." Some lazy bastard made my name synonymous with being a quitter. So I'm a penis or a quitter. Rad.) 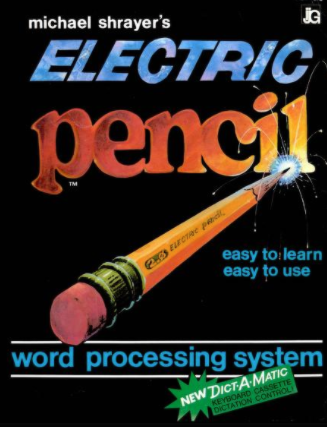 Electric Pencil was word processing software for the TRS-80, which was a top-selling computer sold by RADIO SHACK, if you can believe it.

The TRS-80 was popular enough that Radio Shack still sells these vintage shirts with the logo of their old computer emblazoned on it. If you want to test for true nerd-dom, I HIGHLY recommend sporting one of these bad boys: 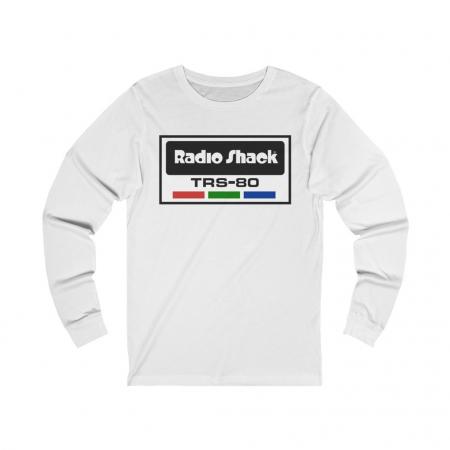 Electric Pencil users had to modify their computers because the TRS-80 Model I didn’t have lower case. Now, I don’t fully understand the technical details, but a fella had to add a little memory to the TRS, as well as a manual switch that turned the memory on and off. Oh, and when you were done with that, you had to add a Control key to the keyboard.

Folks, this was the kind of shit you got into with word processing in the 70’s and 80’s.

If people involved in fisticuffs shout “Worldstar,” maybe writers should be shouting “Wordstar” into their cameras whenever they finish banging out a manuscript. I don’t think these videos will be as popular, but hey, did you start reading a column about word processing software to be popular? Because if you did, you should probably strip off that Radio Shack sweatshirt and maybe, I don’t know, get some hair gel?

Wordstar made use of an overlay to help provide commands. See, keyboards didn’t have the same standard items, such as arrow keys. So you might use a whole combo of buttons to type. 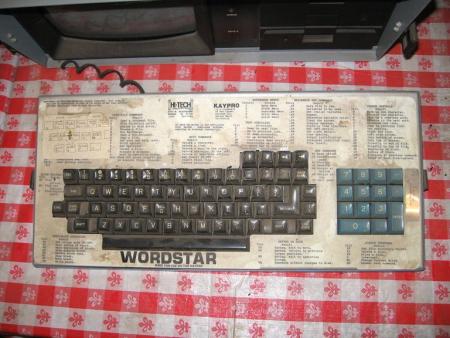 Perhaps Wordstar came across your radar a few years ago when George R.R. Martin revealed that he writes on Wordstar 4.0, a release from 1987. He doesn’t care for automated corrections. As he puts it: “I know how to use the Shift key.”

It might be the ultimate productivity tool, a word processor that doesn’t even suggest the existence of an outside world. Buuuuut I guess we’ll see if The Winds of Winter ever actually arrives. By the way, I don't italicize the titles of hypothetical books. 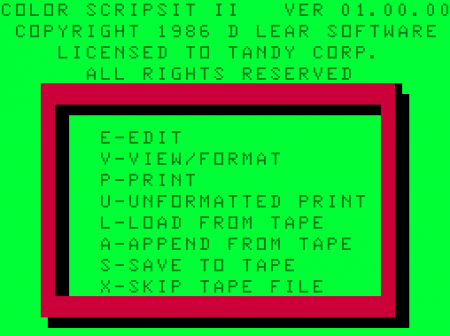 My two favorite things about Scripsit:

One, it came with audio cassette-based learning. Which is pretty brilliant. Someone hit on the best method of helping years before all these YouTube videos for Photoshop help. I'm guessing the Scripsit tapes didn't start with 15 seconds of unnecessary, weird music, like dubstep Enya for some reason, but they did the job.

Two, spellcheck was available. For an extra hundred bucks! Now that’s how you make that money. Sure, you can type with this. But unless you want to sound like a dolt, you'd better fork over that hundo.

It did support  Qume, Diablo, and Xerox printers, and what I love about that is that Xerox really does make more sense as a name when it’s next to Qume and Diablo. It’s like, “Oh, yeah, I guess most of this stuff was built and named by nerds.” 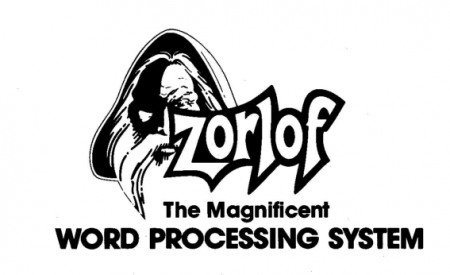 Zorlof was a pretty good word processor, and it wasn’t too expensive. It could wrap text, so it knew, by itself, when to make a line break. If you started working on a document today, and it just blasted off to the right until you told it to stop, you’d be pretty flummoxed. It's really the little things that people like this rad wizard brought to the table.

Zorlof’s best feature was its very metal artwork. Which really only appears on the front of the manual and probably on the box art (I couldn’t find the actual box art, but one has to assume).

However, this awesome artwork was probably Zorlof's downfall. As a reviewer from Creative Computing said:

I had seen the full page advertisement for Zorlof several times, but had not paid any attention to it. I am interested in games, but have little time for them, so I am not attracted to game advertisements. Only when a friend called my attention to it did I realize that Zorlof is not a game, but a word processor and a darned good one.

The manual, sadly, isn't written like a fun quest or something. It's a total snooze. They even have a blank page on page 52, and did they put an awesome Frank Frazetta wizard pic? No, they went with the very IRS “THIS PAGE INTENTIONALLY LEFT BLANK.” Does no one else think it’s super ironic to put something on a page, making it no longer blank, that tells the page is blank? Shouldn’t it be like, “The following page is intentionally left blank”? 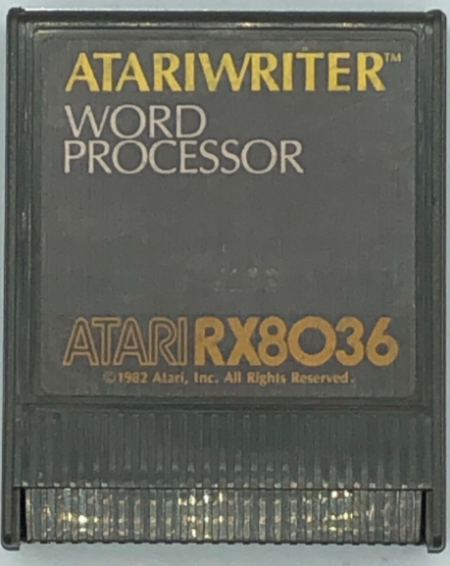 AtariWriter was put on a cartridge for the Candy/Colleen computers. Yes, you can jump on eBay and buy what looks like an Atari cartridge, but instead of blasting aliens or playing a janky Pac-Man, you get all the thrills of word processing.

Atari had the habit of naming their computers after ladies. So we had Colleen, Candy, Pam, and Stella. Because I'm five, I find the description of some of Candy's specs hilarious. I recommend reading this aloud in the style of Cheech Marin outside the Tittie Twister in From Dusk Til Dawn:

Yes, sadly, the timing just wasn’t right, and Atari was not able to get those sweets Apple II slots they wanted.

In a write-up for Byte magazine, Janet Camerson lodges some well-worded complaints about pfs:Write:

...you can add another year to your life in the time it takes to save material.

And the instructions were badly spiral bound. So Cameron said she was constantly losing pages and had to resort to sorting through loose paper. These were the kinds of things that separated good and bad pieces of software back in the day.

This came out in...1987, and it had crashproofing! They would demo this at trade shows by starting a document, unplugging the computer, plugging it back in, and once it restarted, the typist could resume work where they left off. How in the hell did someone figure this out in 1987, and then we lost it for decades?

On the other hand, Sprint was fairly unstable, so it could just implode completely without any external issues. Maybe that has something to do with it. It's like if you had a car with technology that meant it would never, ever crash, but it may just spontaneously combust. I guess if your issue was the very specific thing that precipitated your fiery death, it'd be a plus?

Back To The Present

We’ve got a lot of convenience today. You can use Google Docs, grab something like Jarte, which runs on a flash drive. And all of it pretty much works.

I do miss some of the things that went along with the old software. For example, endorsements by people like Isaac Asimov. I do like a nerd sci-fi writer in a 70’s jacket and chunky glasses plugging software. 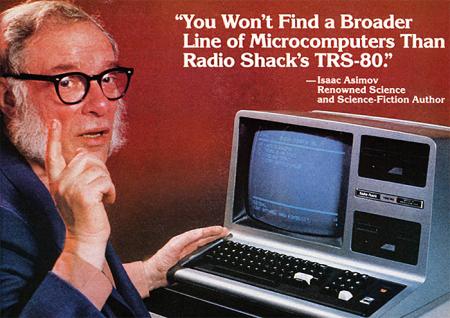 We're pretty lucky, you and me. We don't have to learn a complex layout, worry so much about a computer spontaneously exploding, or bust out a soldering iron. We can just jump on any computer and start typing.

You can jump right on an idea.

What the hell are you waiting for?

Buy Track Changes: A Literary History of Word Processing at Bookshop or Amazon

The Age of No Controversy

Completely agree with the previous comment, in my childhood the software was barely usable and there was no such things as UX and UI, and what I think is fascinating - today you can simply hire machine learning developer and moreover, hire online to the remote software development team. And you will still be able to perform very well, maybe even better than your competitors.

Hello guys, very inteersting article, isn't it? I need some help, i want to buy custom essays online because my writing skill is really poor, but i need to pass some literature exam. I need some reliable and good service for it.

A debt of gratitude is in order for the wonderful article, extremely enlightening! I can say that picking a software development company isn't for each situation straightforward - you need to zero in on various nuances - from the cleaned expertise and extensiveness of the extent of organizations provided for just the comfort of correspondence.

Writing software is now the part of the writing team because they are using to work on the automation. I have written for https://www.customerservicemanager.com/the-state-of-customer-service-in-universities/ but I never use any kind of software for the writing. So writing with the software are not new for me or any other professional writer who value the handwriting work for their client.