A Horror Novel Novice Takes a Stab at Halloween-y Books

I’d like to credit The Shining with being the reason I can’t turn off the bathroom light unless the door is open—I’ve still got nightmares about that one bathroom scene.

When I watched Donnie Darko in middle school, I sprinted to my parents’ car through someone’s backyard at dusk, jumped in the front seat and yelled, “Go, go!” because I was having visions of a giant rabbit chasing me.

I can’t even watch previews or read back-cover copy for horror movies and books because I’m afraid of nightmares, and I have yet to buy one of my favorite author’s (Stephanie Perkins') new novels simply because it’s a teen slasher, and the mere thought of teens slashing is enough to have me clutching my mother’s skirts, sobbing.

Yet for some reason I thought it would be fun to get in the Halloween spirit by reading some horror novels.

The novels of choice were The Shining Girls by Lauren Beukes and Coraline by Neil Gaiman. I did a good bit of asking Twitter for recommendations, Google searching “best horror novels” and then procrastinating for weeks because I was too nervous to pick up the books.Yeah. Good one.

I scare easily, you see, and recently I’m kind of a one-genre reader (young adult) because after four years of reading books for school, to please my professors, I’m mostly willing to read only to please myself. But I had said I would read some horror novels, so read them I would, darn it! 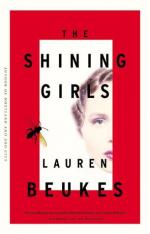 'The Shining Girls' by Lauren Beukes

The Shining Girls turned out to be less horror of the “slasher, paranormal, clutch my pearls and jump at every creak in the floor” variety, more thriller of the “look over my shoulder and scrutinize everyone on the street while rubbing my throat for a nonexistent scar” kind. It’s a time-bendy, serial killer, find-the-truth kind of story, and I found that it didn’t leave me having nightmares or jumping every time I turned a corner and saw someone lurking.

It did, however, leave me feeling a little less uplifted than my usual books. It’s dark, y’all. As are most thrillers and horror novels and serial killer books, of course.

And I’ve found that I’m not one for consuming darkness these days. I’d rather bask in the sunlight and read a summer road trip romance, to be quite honest. Or sit in bed working through an epic fantasy spanning Middle Eastern deserts.

Really, anything that makes me feel warm and fuzzy on the inside.

I know it’s Halloween and it’s time to be gleefully and purposefully spooked out, but the truth remains that I don’t have the appetite for it. 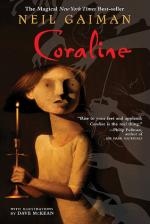 I was really scared to open Coraline. It smacks of paranormal, which always freaks me out, but I chose it because I was feeling like stretching myself.

But as the days passed and I kept ruminating over the book’s presence in my life, chewing my lower lip and wondering what it would do to me...as night fell and the floors creaked in the settling house...I couldn’t do it.

Y’all, I was so scared by a book’s cover copy that I couldn’t actually pick up the book itself! Well, the cover copy and the cover image. It’s...creepy. And I’m staying in this 100-year-old house with extra creaky floors, and every time someone shifts their weight the whole house seems to groan.

Honestly my heart is racing a little faster just thinking about it.

There’s nothing wrong with books like either The Shining Girls or Coraline. It’s just that because of my own depression and paranoia, I can’t read and enjoy anything of the serial killer variety; and because of how easily I frighten, I’m leery to touch anything paranormal or terrifying.

I don’t think horror and I are going to be bosom buddies...partly because I’d rather read a book about a girl who comes up with terms like “bosom buddies” than a book about anything scary. I’ll leave the creepy, twisty, slashy fiction to the fans who can truly appreciate it.

At least for now.

I tried, but it didn't pan out. Suggestions for titles that might work for a horror novice?

LURID: Happy Halloween! Whatever that means...

'Doctor Sleep' and the Evolution of Fear