Adult coloring books simultaneously fill me with curiosity and snark. What is this strange, very ornate, black and white thing? What does one do with it? Are we really supposed to sit down and color in the pictures? Who does that? Based on the sales—millions and millions of people. Based on anecdotal evidence, definitely fewer than that. It is one thing to buy the thing; it is quite another to do the thing. But obviously, some do, and are very proud of themselves. I have a really hard time when I see someone I know posting a picture on social media of a coloring page they filled in. What am I supposed to do with that—congratulate them? Good job! You colored! Someone else's art!

Clearly there is more to learn here. Let's explore this strangely ubiquitous phenomenon. 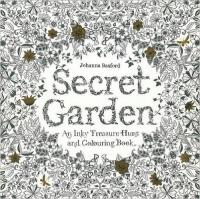 Accoring to Publisher's Weekly, the coloring book boom started in the United States in 2015 with the American release of Johanna Basford's 2013 Secret Garden. PW credits the beginning of the overall coloring book trend with Hachette Pratique's publication Art-thérapie:100 Coloriages Anti-Stress in 2012. This snowball that started the avalanche is full of butterflies, flowers, and paisleys, the defacto language for coloring books today. At the time, it must have seemed fucking revolutionary to the publishing team that designed this book. Look at what we have wrought! They hemmed and hawed over how to make fill-in-the-blank paisleys attractive to grown-ups, and came up with stress relief. Stress was high on the mind in France around this time, creating the ideal market condition for the mass-market adult coloring book. Americans, who also like to stress, took to the notion a couple of years ago and now you can easily buy an adult coloring book at the grocery store.

Fans of coloring like to point out the meditative, mindful quality that coloring produces. And yes, it turns out they have a point. Coloring may lower heart rate and produce changes in the amygdala, the fight-or-flight center in the brain active in people suffering from PTSD. Art Therapists are very quick to point out, however, that coloring is not art therapy. Art therapy is therapy through creative expression, in which patients work through issues by making art. Very few art therapists use coloring as a tool, but seem to be happy to see any application of art practice that makes people feel better. Just don't call it art therapy, even if many coloring book series do. Think of it, as the founders of National Coloring Book Day do, as a time to "relax and color."

Lowbrow and Highbrow and All the Brows 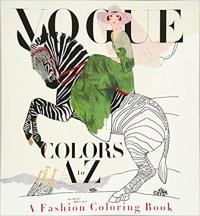 Were you aware of the 12-page $170 adult coloring book put out by Hermès? Of course you were; you color with taste. There are so many coloring books now focused on fashion, which makes sense because fashion is a field that draws and colors. I feel almost like a fin-de-siècle fashion designer while I peruse the pages of Vogue Colors A to Z: A Fashion Coloring Book. There are plenty of interesting adult coloring books if you go looking for them. But let's consider the selection at Walmart or Target, where many coloring books are purchased. Try the Inkspiration series instead. If you like images of elephants that look like they were made from fancy carpets coupled with quoted by Gandhi and Oprah, this is the series for you. The masterminds behind the Chicken Soup for the Soul series have brought the world Inkspiration and the world is coloring it up!  Inkspiration and Secret Garden iterations aside, I've been very happy to see Richard Merritt's work gracing popular shelves because his animal portraits are stunning. I worry about ruining them with color, honestly, and this is why adult coloring books are not meant for me. Or any created in this day and age, anyway.

I ran across a fascinating post on the origins of adult coloring books in the U.S., and it turns out they were subversive and political and not meant for coloring at all! The Executive Coloring Book from 1961 was all about how corporate America sucked the life out of its workers. It had directions like “THIS IS MY SUIT. Color it gray or I will lose my job.” It was followed by a slew of coloring books as political satire that dominated the book scene of the early 1960's.

Is it possible that the insane market craving for adult coloring books could start to move in a political direction? Or any direction really, besides "Adult Designs"? There are a fair number of foul-mouthed coloring books on the market now, which I enjoy tremendously, but I wonder if King Supers will ever carry them. There is also the possibility of merging art forms, as Chuck Palahniuk does in his new venture into the genre with Legacy: An Off-Color Novella for You to Color. Many writers from the coloring movement talk about the process as being collaborative, but I don't really buy it. But there is promise in interacting with text that goes beyond images. Will we all be coloring in our paperbacks in the future?

Community Manager
helpfulsnowman from Colorado is reading But What If We're Wrong? by Chuck Klosterman November 20, 2017 - 1:50pm

I heard an interview with the above-mentioned Chuck Palahniuk, and he was saying that coloring books are saving the book industry right now. It makes sense. Finally they've hit on something that is gift-able without being resellable or loan-able by libraries.

Coloring has a meditative quality for me that doesn't come easily. I'm not very artistic. I can't draw for shit. Coloring is a way to engage with visual arts that I can handle. It's less pressure, less likely to have a terrible outcome. Lynda Barry uses coloring often in her classes (http://thenearsightedmonkey.tumblr.com/). So on the softer side, I think it's like Sudoku or crossword puzzles or something like that. I don't think sudoku will make you a mathematician, and I don't think crosswords will substitute for writing something. But I think it can be good for people to engage with numbers, words, and visual arts on some level in their day-to-day lives, and the advantage of something being trendy is you suddenly have all these people engaged in artistic practice who weren't before.

I have been painting since i was 11. Art is my passion and i am truly into it, have opened an art gallery for my self. I wanted to get my check and my employees pay slip to have my designs so i gave Carousel Checks coupon codes my designand asked them to print it on my check. And now it is looking so beautiful, i have always wanted my name and design to be every where and that day will come

great color ideas i must say i should try them. I have also mobile repair shop.

great color ideas i must say i should try them. I have also mobile repair shop.