All Stories Are Existential

Many readers would consider existential novels to be a sub-genre of literary fiction, including works by Sartre, Camus, de Beauvoir, and maybe a few more contemporary names like David Foster Wallace and Milan Kundera. Really, though, all fiction is existential, and if yours isn’t, then it’s probably pretty boring. Here’s why.

One of the fundamental tenants of existentialism is that people are defined by the choices they make. According to this philosophy, humans have no inherent essence when they’re born—individuals define their own essence through their decisions and actions. Hence the catchphrase from the godfather of existentialism, Jean-Paul Sartre: “existence precedes essence.”

Sartre went further when he said, “...there is no reality except in action,” and this is where we get to the way good stories work. I could easily rephrase Sartre and apply this idea to fiction writing by saying, “There is no story except in action.” By action I do not mean action-packed, like shootouts and car chases, but actions the characters take based on their choices. All good stories, at their core, are based on those decisions and the resulting conduct.

All fiction is existential, and if yours isn’t, then it’s probably pretty boring.

It’s important to distinguish “characters’ actions” from “things happening.” Some writers may analyze their story by how much happens and think that, because there’s a lot, characters are taking action. This is not the case. For example, suppose you had a story wherein someone burns books for a living, going where his employers tell him to and setting fire to the volumes. There’s lots of fire, lots of destruction, maybe even some death—lots of things happening. The story only becomes interesting, however, when this character resolves to save a book and read it, setting into motion a series of further events. Fahrenheit 451 is a good story because Montag makes that choice, takes that action. All the conflagration in the world isn’t as rhetorically effective as Montag’s one decision.

As another example, suppose you had a woman who was planning a party, running around town to make sure everything would be perfect for her guests, including her husband who provides for her. A lot is going on, this woman is busy, but it’s not a story unless she’d made the choice to marry her husband instead of another, possibly more interesting man—or even a woman for whom she has affection. This makes her actions a result of that decision, and allows her to question the way her life has turned out. Clarissa Dalloway’s choices drive Woolf’s novel, even if those choices are in the past.

Action is one thing, but action based on choices is another, and it’s the latter that moves a story forward, shows us who the characters are, and keeps readers engaged.

Another aspect of storytelling that can complicate things in the realm of existential action is that bad events are inherently more interesting than good ones. As Janet Burroway said, “Hell is story friendly.” This becomes a problem regarding the existential aspect of the story when a “hell” is not caused by characters’ actions, or directly causing those actions. Bad things can’t just happen to the characters, the bad things have to happen because of the characters, force the characters to react, or both. 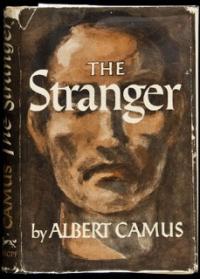 Suppose, then, a man’s mother dies of natural causes. That is definitely bad, but it’s something that happens to the man, not because of anything he does. There’s action, there’s “hell,” but that doesn’t make a story unless the man makes some sort of choice on account of what’s happened to him. Say, for example, he chooses not to mourn, but instead just watch the people at the funeral and comment on them. Then, as a continuation of the mental state he’s in, he helps his friend take revenge on a woman, which will emotionally scar her. It is these decisions that make for one of the most famous existential novels, The Stranger. The badness—Meursault’s mother dying—isn’t what the story rests on. That’s what happens to the character. It’s the choices he makes afterward that keep the story moving forward. If you haven’t read it, plenty of other bad things happen based on the actions this character chooses to take. Camus knew what he was doing when it came to existentialism.

And then if you want to go way back to a text that’s about as fundamental as it gets, look at the biblical story of Job. Satan is literally given free reign to do anything to this guy except kill him, so plenty of things happen and they’re all bad, but that’s not the story. The story is Job. The story is that he chooses to keep his faith. All the “hell” in the world doesn’t make for a story if the character doesn’t make choices. In this case, amid all the chaos Satan reigns down, the central action of the story is a subtle one, it’s that Job decides to stay the course of being a faithful person, maintaining his trust in God.

As you’re writing your story, think about it in these terms:

The answers to those questions should all be elements at the center of your story. If they’re not, or you don’t have answers, then it’s time to take a look at what’s fueling your writing and decide whether or not it’s “stuff happening” as opposed to “stuff happening because of characters’ decisions.”

The word existential may have, in some contexts, devolved into an epithet for things that seem deep or important, but that’s not really what it means. When it comes to literature, that’s definitely not what it means. So take some time and go back to Sartre, remember his idea of existentialism when it comes to choices and actions, and how fundamental that is to good storytelling.

Buy The Stranger by Albert Camus at Bookshop or Amazon

Buy Mrs. Dalloway by Virginia Woolf at Bookshop or Amazon

Great column Josh! In a nutshell, everything you need to know about character arcs. Any upcoming classes on LItReactor?