Book vs. Film: 'Die Hard'. Plus An End To The Christmas Movie Debate

To enhance my enjoyment of Die Hard, I went ahead and read the book it was based on, Nothing Lasts Forever. After all, the book is ALWAYS better than the movie, right? Which meant Nothing Lasts Forever was liable to blow my mind all the way down my throat, through my digestive tract, and violently out through—well, you get the idea.

Let me tell you all about it. Plus, stay tuned for definitive proof that Die Hard is, in fact, a Christmas movie. 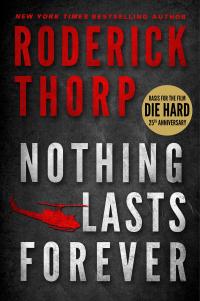 In 1966, author Roderick Thorp released The Detective, a novel about a detective. Well-titled, that one. It was made into a movie by the same name in 1968, starred Frank Sinatra as the titular detective, and did well at the box office.

I say “eventually” because there were some serious changes between Nothing Lasts Forever and Die Hard.

What changes? Spoilers Ahead.

For the most part, Die Hard follows the story set out in Nothing Lasts Forever. A cursory read of the book will even lead you to believe that Die Hard is a faithful adaptation. The basic setup is the same: people trying to steal money from a safe in a big-ass building, a New York cop doing the fish out of water thing in L.A., the jump off the roof with the fire hose, taping a gun to the hero’s back, Al Powell assisting on the ground—the pieces are all there.

But when you read the book carefully, you can see why we all owe the filmmakers something extra in their stockings.

For starters, the book has a bunch of extra crap we don’t need. A semi-romance takes place between a flight attendant and Joe Leland (the McClane character) during Leland's flight to L.A. The flight attendant and Leland know each other for all of a couple hours, but Leland is desperate to talk to her over the radio during various points of the siege. Sorry, that doesn't work. I don’t really care about a romance that started like two hours ago WHEN YOU’RE BEING HUNTED INSIDE A SKYSCRAPER BY TERRORISTS WITH MACHINE GUNS.

John McClane is goddamn charming. It’s part of why you root for him. Where Leland is cold, calculating, and in his element, you get the feeling that McClane is WAY out of his depth and surviving one moment just to get to the next one. You root for McClane because he’s the underdog. Leland is like Mr. Counter Terrorism. He’s a WWII veteran and pilot. He knows all about who the terrorists are, which countermeasures the police will take, and so on. He even credits himself with coming up with the idea of selling small items, like pens, attached to cardboard to reduce shoplifting.

I mean, c’mon. Can you imagine John McClane bragging that he added plastic bubbles and cardboard to pens to stop kids from ripping off a Bic at the Walgreen’s?

Oh, and the ending of Nothing Lasts Forever? Bummer city.

Where Leland is cold, calculating, and in his element, you get the feeling that McClane is WAY out of his depth and surviving one moment just to get to the next one.

You probably remember Die Hard, where Hans Gruber is going out the window, and he grabs Holly’s arm, almost pulling her out. He snags her watchband, but McClane manages to release the clasp, sending Gruber out the window solo in that beautiful slow-mo shot.

In the book we have a similar situation with the bad guy falling out the window and grabbing the leading lady (notable difference being that Holly Gennero is replaced by Stephanie Gennero, who is Leland’s adult daughter as opposed to estranged wife). The setup is almost identical, but in the book, Stephanie plunges out the window with the baddie and crunches into the ground, dead. Which sparks Leland to kill all the remaining terrorists, including a baby-faced female terrorist. It’s cold-blooded and dark, and it’s straight-up revenge, which doesn’t leave a great taste in the mouth.

In the book’s original ending, Leland was also killed, but this was softened to him being wounded. And, you know, completely alone in the world and having just witnessed/being partially responsible for his daughter’s gruesome, terrifying death.

Overall, there are two very damning things I can say about the book.

The first is that it was criticized as being “tasteless” and “exploitative” BY A 1980’S HOLLYWOOD SCRIPT ANALYST. The people who brought you such film classics as Low Blow, Killpoint, and My Mom’s A Werewolf lifted their faces out of huge piles of cocaine just long enough to express that they felt this book was a bit too rough around the edges to be made into a motion picture. “We can’t put THAT on screen. Now hand me that script for Death Wish 4.”

The second damning thing is simple: The book's no fun. John McTiernan said this about the earlier scripts, which had a strong basis in the book:

There's no fun in this. No one feels good about it. There's no way you can convince someone to get a babysitter for the kids, go to this movie, and come out of it saying, 'Wow, this is a lot of fun. I got to tell everybody else to come and see this.'

Nothing Lasts Forever’s best attribute is its title, which blares out at you from the cover, a constant reminder that this book will eventually end.

Do You Hear What I Hear?

Enough about that book. Let’s get back to Die Hard.

I was hoping to settle this by reading Nothing Lasts Forever, and I did gain one little piece of evidence for the pro-Christmas camp. I also read Die Hard: An Oral History by Brian Abrams, which is a great one for true fans.

Armed with all the information I can tape to my back, I think it's time we settle this.

Does Die Hard take place during or around Christmas?

If Rankin/Bass make you feel warm fuzzies, that's awesome. We had different childhoods

Is the timing of Christmas central to the story?

Yes. It might look like it’s just a little extra flavor, but it’s really more diabolical. This is made a much bigger deal in the book, but the reason Hans and the boys decided to take over the building on Christmas Eve is because law enforcement and security would be operating on skeleton crews. It would take a lot longer to get everyone on-scene, leaving the baddies plenty of breathing room. Additionally, it’s a convenient time when an office building is mostly empty, save for the hostages they want, and all of them are gathered in one area.

This is less explicit in the movie than it is in the book, but the source material provides context that makes the Christmas element more central to the plot.

Is there Christmas music?

Does it have a happy ending?

Yes. Especially compared to the book.

How about cold weather? 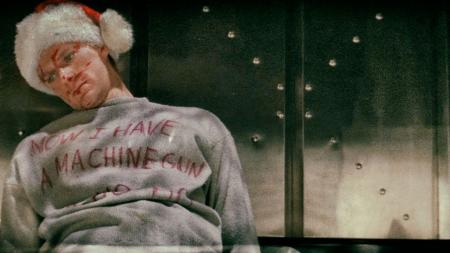 Yes. “Now I have a machine gun Ho-Ho-Ho.” The tape on McClane’s back is clearly Christmas-themed. John is visiting Holly and their children because it’s Christmas. There’s a Christmas party. There’s a whole lotta Christmas going on. The word "Christmas" appears 20 times in the script, and the word is said aloud 12 times.

But Die Hard came out in July!

Miracle on 34th Street came out in May. May! Is there any more Christmas-y movie, and is there any less Christmas-y time of year? Plus, nobody knew what to do with this thing. Is it a dumb action movie? A smart thriller? An action comedy? What is this? It's hard to imagine now, after decades of movie pitches that go "It's like Die Hard, but on a military boat/bus/cruise ship/mountainside/airplane/Alcatraz/Air Force One!" but Die Hard was a new kind of thing, and it baffled a lot of executive types. They put it during summer blockbuster time. Go figure.

Does it have a lesson about the true meaning of Christmas?

Absolutely. At the end, our heroes completely ignore what is essentially money falling from the sky, eschewing material things for togetherness.

Bruce Willis said it's not a Christmas movie!

Well, Steven de Souza, Die Hard screenwriter, says it is. Also, it should be noted that Willis' quote came at the end of his roast. So is it possible that he made the decree for the sake of trolling? Entirely.

It's more of an action movie than it is a Christmas movie!

I'm not going to get overly interpretive, but for some of us, Christmas is a huge pain in the ass. We identify with John McClane flying all the way across the country to try and mend a very complicated relationship (and mostly screwing it up) as a Christmas tale more than we do some stupid story about unwrapping presents and being super happy. I'm a child of the early 80's. Broken homes were a thing. Problematic parental figures were a thing. Lousy Christmases were a definite thing.

If Rankin/Bass make you feel warm fuzzies, that's awesome. We had different childhoods.

Alright, I’ve bludgeoned you with all the reasons Die Hard is totally a Christmas movie. But it doesn’t really matter.

Oh, one last quick point. If we’re really going to argue about what is and isn’t a Christmas movie:

Wait, 'A Christmas Story' Was A Book?

Book vs. Film: "The Little Stranger" - When Interpretation Goes Too Far

Book vs. Film: 'The Silence of the Lambs'