When it comes to matters of personal taste, notebook preferences are more particular than preferences regarding pizza (NYC v. Chicago, Pineapple V. People Who Are Objectively Correct), masturbatory habits, and which Quiet Riot song is the baddest-ass.

I’ve experimented with a lot of notebooks. Moleskines, of course, which are pretty nice but come with their own problems (we’ll get into it). Five Stars, Composition Books. I’ve been gifted notebooks with paper made out of elephant shit. The paper isn’t great, but when you remember you’re writing on a heap of elephant turd, you have to give it some credit.

Nothing quite fits. Everything has its flaws. So I figured, fuck it, I’d just make my own damn notebook.

This sort of "I'll make my own X" declaration is responsible for our stupidest and best inventions. Someone was dissatisfied with the pencil, so they invented the pen (probably how it happened). That worked. Someone was unhappy with the Alex Murphy Robocop, so they invented a new Robocop in Robocop 2 (this went poorly, and a drug kingpin child with a machine gun paid the ultimate price, as is usually the case).

I’m hoping this works out somewhere between the greatness of the pen and the bitter defeat of a child's death.

Notebooks all have their peccadilloes, but some cross over into dealbreakers. Let’s start with an approach that serves no one well in online dating profiles: listing flaws that you don’t want to deal with.

Won’t Lay Flat: Notebooks laying flat with almost zero pressure is a must. The notebook should almost open by itself, inviting use.

Paper Sucks: Crap paper is real. Look, maybe you’re one of the greats who doesn’t get sweaty, greasy hands for no reason when it’s not even hot outside. Good for you, your highness. A good paper has to accept ink readily, even if it’s a little greased up by my naturally-produced lubes, and the ink has to dry fast so it doesn’t smear.

Too Much: I’m of the opinion that most notebooks have too many pages. They should be slimmer. Plus, losing a notebook with hundreds of pages is a tragedy. A few dozen? No biggie.

Too Little: The standard Moleskine is a little small for me. One line fits like 5 words.

Too Flaccid: The cover has to have some firmness. Otherwise, you’re always looking for a writing surface.

I started with size. Because that matters most. Penis joke. 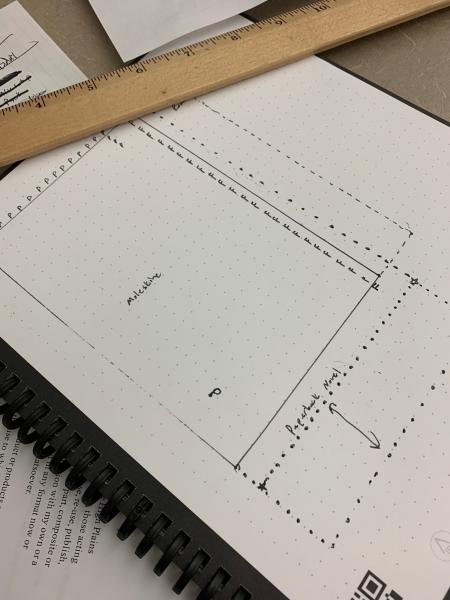 After some careful analysis, I figured that I wanted something that was large, but that could still be crammed into a back pocket. It didn’t have to fit entirely, just barely in terms of width, and height-wise, sky's the limit.

I measured my back pocket and figured I had MAYBE an extra inch back there. BUT, I’m working hard on my squats, so some of that real estate would be filled with bodaciousness by the end of the year. If that happens, I won’t even need a notebook because, pfft, forget writing, I'll be butt famous. Butt famous is MUCH better than writer famous. My grandmother taught me that.

Then I hit on a brainstorm. Which somebody else hit on decades ago.

Paperback novels were meant to be portable. To fit in a pocket, just barely. I measured it out, and a paperback novel, taller than a Moleskine, wider than Field Notes, was just about right.

“The art of bookbinding is dead,” you say? Well, sure. But so is the novel. So is the artist. Everything is dead. We’re walking through the mausoleum that is life. Don’t act like you’re original for seeing that.

Without getting into way too much description, a few things:

1. Here’s the book press/sewing device I made. It’s two slabs of oak, carriage bolts in four corners, and screws near the front for holding binding ribbon. This stuff is for true nerds, so if you have questions, ask in the comments below. 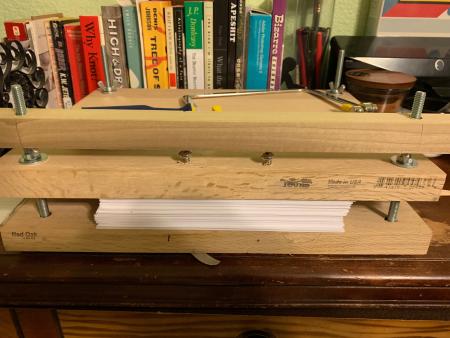 2. Here’s a resource I used for my first binding projects. Yes, my first project was binding comics. No, this did not cause potential sexual partners to throw themselves at me the way the aforementioned squats totally will.

3. Here’s another resource. This person’s videos show everything step-by-step.

Seriously, if you have questions, ask me below. Otherwise, I’ll assume nobody really cares and everyone is just politely nodding at this point. 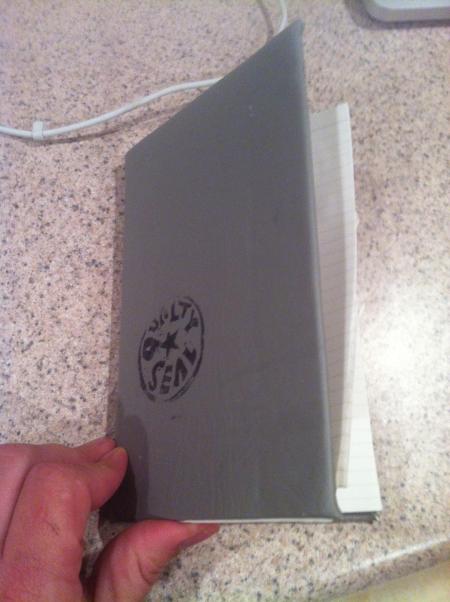 Of course, no project is really finished without the “Qualty Seal.”

Perfection? Well, no. I made it. So that seems like a pretty obvious “No” from the start.

That said, it’s a project worth your time. You can craft the story, so why not craft the thing you write the story in? Why not make your own rules, make your own notebook, and write sentences that end in prepositions inside that notebook (like my previous sentence)?

Whatever your gripes about notebooks, exorcise them by making your own. If nothing else, you’ll gain new respect for the notebooks you don’t have to make yourself.

Granted, the time I spent making a notebook would have probably been better spent writing inside an inferior notebook. But one could say the same about the time you just spent reading this column. Let's both just walk away.

Can We Build It?: 5 DIY Bookshelves

DIY Book Covers for the Self Publishing-Inclined Part 2

The Guide To Building Your Own 2017 Reading Challenge

Thanks for telling the process to build a custom notebook. Currently I am searching for the sites like bestessays.com review so I saved your post and in future I will try this. Because I am busy so I will try it later.

Cafe Racer Jacket It was truly quite remarkable post I love to see this sort of enlightening data you shared the great post beautiful a debt of gratitude is in order for sharing. We additionally compose the Argumentative Essay Academic Help in an expert manner I am keen on visiting the site once more. I truly dazzled with your work it was so acceptable thank you for sharing.

Wow, superb blog layout! How long have you been blogging for?
you make blogging look easy. The overall look of your site is wonderful,
let alone the content!  women's leather motorcycle jacket …..!

this article is good and knowledgeable. I really appreciate you to upload the post Yellowstone Beth Dutton Coat

Get your appearance up a notch with this beautifully designed Yellowstone Beth Dutton Coat  Brown Leather Trench Coat.

Out West coffee is small-batch roasted to maximize flavor: Loring Smart Roasters are the most efficient roasting equipment in the industry. The coffee roasting process used is 80% more efficient and generates 80% less toxic emissions than traditional roasters.

Thanks for sharing this incredible post. It is critical and extraordinarily accommodating for us, Lady Gaga Jacket Top Gun and the articles are perfect to bestow to everyone. Continue to do amazing! Thankful to you for the uncommonly instructive article.

Thank you Chris Jericho Light Up Jacket for sharing this fantastic article. It is essential and quite accommodating for us, and the goods are ideal for gifting to anyone. Keep up the fantastic work! Thank you for the extremely informative essay.

Thank you for the sharing. I also think notebooks can help us to make our life easier. That's why I usually put a notebook into my Harley Davidson purse that I recently ordered from Vascarabag. You can see more details here if you are interested: https://vascarabag.com/product/hld-vascara-leather-handbag/

You gave such a great tips for building a notebooks. Thanks for the nice blog. It was very useful for me. Princess Diana Eagles Jacket