I notice a lot of discussions centered around the importance of reviews. Are they or aren’t they?

One author told me they don’t ever read reviews of any kind about any book, especially reviews of their own books, and they are not convinced they’re of any importance or have any impact on a book’s sale-ability. That might be true for that author, but personally I don't think it's an accurate assessment of reviews in general.

People can believe whatever they want and are entitled to their opinions, but I can point to countless reviews on Goodreads where people straight up tell reviewers in the comments they were motivated to buy the book.

And I don’t just mean five-star reviews. I mean all kinds of reviews. In a three-star review, someone could write, "I liked everything about this book except all the disgusting things the killer did to his victims, so for that reason, I took off two stars." People reading the review could think, "Oh yeah, disgusting things to victims sounds awful, I think I'll pass."

"A killer that does disgusting things to their victims, eh? Sold."

That's just how it works. Different strokes for different folks.

In a review I wrote for The Bedding of Boys by Edward Lorn, I was very vocal about why I didn't even finish the book. I was descriptive when sharing my honest reading experience and I intentionally highlighted my respect and praise for Lorn's writing abilities. One reader/reviewer commented:

Great review, Sadie, and thank you for your honesty! The triggers you described are exactly what I was worried about and why I refused to read this based on the synopsis. Ed is a great guy and I would happily check out his writing some time, but I know I wouldn’t be able to get through the content in this one, either.

Warning read, considered, and then I went and bought the damn book.

Lately, I've noticed a trend on social media. Authors will actually post their one-star reviews with a sense of pride and admiration for the review. On Twitter, author Sara Tantlinger shared a one-star review she thought was amusing: 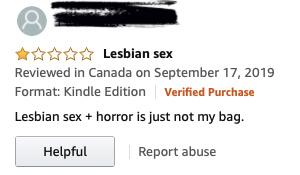 At first blush, this looks like a scathing review, but upon closer inspection, the bold heading, "Lesbian sex" is going to turn some heads. The body of the review is simple enough, lesbian sex and horror is just not their bag. Fair enough. But imagine how many people will see this review and think, "Well both of those things are my bag. SOLD." When I asked Sara if she felt the review sold books, she had this to say:

The review genuinely made me laugh since it wasn’t posted with malice or anything like that. And yes! I had several people send me screenshots of them ordering the book, which was great! The tweet attracted random people who weren’t even following me before to seek out the book, and the whole thread cracks me up, so a lot of positivity came from it.

Author Joe Abercrombie has made it almost a daily practice to share reviews that aren't necessarily "glowing." This one from a four-star review:

And I would bet my measly savings that this one sells books:

I asked Paul Tremblay if I could share this one-star review of his Bram Stoker Award winning novel, The Cabin at the End of the World: 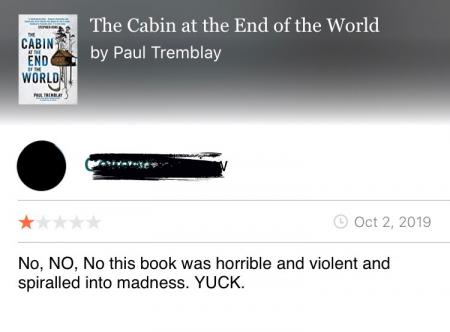 For most readers of horror fiction and fans of Paul Tremblay's previous books, a story that's horrible, violent, and spirals into madness is like a big neon sign to buy the book.

Perhaps my favorite and final example is from the urban horror king, Alan Baxter. He made a t-Shirt out of a one-star review he's particularly fond of that reads, "Gratuitously unpleasant." Alan periodically posts a picture of himself wearing the t-Shirt and promotes a healthy attitude among his peers to embrace reviews of all kinds and take everything with a grain of salt. I wanted to gain a little more insight so I asked Alan a few questions:

1. Do you normally read your reviews?

Yes, almost always. So many people say you shouldn't, but I love reading them. Thankfully I get very few bad ones. Maybe if I got more negative reviews, I'd stop reading, but I see value in all reviews. It's great to see people engage with my books and talk about them.

2. After you made light of this review and shared it with others, do you think it helped sell books?

It definitely did. It was just a lark, but people have since messaged me to say they bought the book after seeing the t-shirt posted on social media. I wore the t-shirt on a panel once and a woman came up to me afterwards and asked if it was real. I told her it was and she bought the book with her phone right there in front of me! (The book is Bound, the first Alex Caine book).

3. How do you feel about reviews in general? Helpful?

Definitely, no question, they're helpful. Word of mouth is still the real engine of any book's success, and that often starts or is boosted by reviews. I know people have bought my books after reading a review because they've told me so. And I've done it too.

It's my feeling that reviews are an invaluable form of "word of mouth" advertisement. Even negative reviews can influence a reader to buy a book. One reader's trash is another reader's treasure.

I’LL KILL YOU! Amazon, Goodreads, and the Death of Criticism

13 Ways to Support an Author Without Ever Spending a Dime

Community Manager
helpfulsnowman from Colorado is reading But What If We're Wrong? by Chuck Klosterman March 9, 2020 - 12:22pm

Here's a hypothetical: You must choose one of these two books without knowing any information other than:

Which do you pick?

I'm definitely going with the 1/5'er. At least it'll be an experience.

I think those were the first two reviews for the book.

Mother.Horror from Washington is reading The Between by Tananarive Due March 11, 2020 - 9:41am

I would 100% choose the one with the 1/5 star ratio. I love to see where I land on a controversial book. Love it or hate it.