It’s fairly safe to say Civil War, in both its incarnations, has been a success. The comic book crossover event sold well in a time when comic books weren’t supposed to be doing that anymore, and the film seems to be raking in both money and good reviews. But how well does this latest adaptation serve its source material?

Be warned, past this point we're going deep into SPOILER country.

The film is less academic about it, but definitely captures the magic of a shared universe that the first Avengers film had in spades.

While the movie is a loose interpretation of the comic books, all of the broad strokes are intact. There are the requisite epic battles that quickly spiral out of control, peppered with the trademark witty banter we’ve come to expect from Disney’s Marvel. Iconic scenes from the books are faithfully recreated on the big screen, but enough has changed that not even devout readers can be sure of what will happen next. Captain America: Civil War condenses about a year’s worth of comics into a fairly entertaining afternoon at the theater. Having the heroes fight each other instead of some new big bad puts a new spin on the MCU’s well-worn formula, and actually allows the philosophical debate at the heart of the Avengers’ breakup to be more than a token excuse for fisticuffs. We have time to understand the reasoning behind both Steve Rogers’s and Tony Stark’s beliefs, and watch how their ideological differences fracture not just their own relationship, but the entire team’s as well.

The first big deviation is the cast. 2007’s Civil War involved almost every superhero on Earth, while the movie is limited to Avengers we’ve seen onscreen before, with the notable exception of Black Panther. The comics kicked off their clash when a team of young and inexperienced superheroes tries to capture a group of villains that are out of their league. One of the bad guys explodes and kills 600 civilians. This leads to the passing of the Superhero Registration Act, a law that requires anyone with powers to make themselves known to the government. Iron Man champions the bill, believing that superheroes need to be trained and regulated, while Captain America argues that enforcing such a law will only create more conflict between superpowered people. Although they make a few attempts to resolve their disagreement with a conversation, they of course inevitably come to blows.

Captain America: Civil War also uses public outrage over the fallout from superhuman combat to pass a similar piece of legislation: the Sokovia Accords, named for the small country that was dropped out of the sky in Age of Ultron’s finale. In the comics, Cap opposes the law on principle alone. In the film, he has a much more human motivation—he goes rogue to protect his old friend Bucky (aka the Winter Soldier), who has been framed for the assassination of the king of Wakanda and is wanted by pretty much every government in the world. Framing Cap as a man who can’t abandon a friend rather than a man who just can’t lose an argument is a slight improvement over the original.

What happens next, both versions have in common. The Avengers split, picking sides to go to war over paperwork. It escalates rapidly because Tony Stark can’t admit that he’s wrong again. Movie Stark is still wracked with guilt over creating Ultron, a killer robot that tried to wipe out humanity. Comics Stark wants to atone for nearly murdering a UN ambassador while under the influence. Both want redemption so desperately that they ignore the flaws in their plans. Captain America’s stubbornness also fuels the fire. Instead of finding a way to communicate with his friend, he resorts to throwing punches. 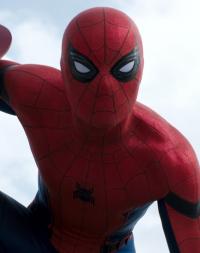 The much anticipated Marvel iteration of Spider-Man enters the narrative at this point. He is the young idealist recruited by Stark, bringing some welcome levity to what would otherwise be a grim showdown between former comrades. The movie is only interested in Spidey as a recognizable brand and comic relief, but he has a much bigger part to play in the books. He revealed his identity publicly in order to convince other young heroes to register, but was ultimately betrayed by Iron Man when he didn’t agree with the harsh methods used to enforce the new law.

Stark asks Rogers why he won’t just sign up and get with the program, accept a little government oversight. Rogers replies that governments are made up of people with agendas, and they can quickly change—he still remembers a SHIELD that had been infiltrated at the highest levels by Nazi agents. Both incarnations of Stark eventually come to justify Rogers’s fears, creating the very conflicts he sought to eliminate. In the comics, he equips a goon squad with knock offs of his armor, creates a strike-team of captive supervillains, and indefinitely detains many of his friends in an other-dimensional prison without trial or access to legal counsel. At the end of the movie, Tony finally shows up to help his friends catch the real bad guy, only to abandon the mission for personal vengeance when he learns who killed his parents. He knows Bucky was a mind-controlled assassin used against his will, but doesn’t care. Signing the Sokovia Accords doesn’t stop Iron Man from trying to murder another victim of HYDRA.

The biggest, and by far most predictable change, from the source material is how the stories end. See, in the comics, Captain America is assassinated. Obviously this wasn’t going to happen in the film, not with Chris Evans still signed on for two more pictures and expressing interest in extending his contract. Surprisingly, none of the major combatants in the cinematic Civil War die, and only one is mortally wounded. The death of Captain America was an eye-opening experience for the heroes of the Marvel Universe, and a great deal of hatchet-burying was had in his honor. But the rift between the two sides is left unhealed by the film’s conclusion, and only the Black Panther seems to have learned a lesson from all of these catastrophic mistakes. It left me wondering how Earth’s Mightiest Heroes will come together to face Thanos in the Infinity War films, which I suppose is the point.

Civil War remains one of my favorite crossover events ever for its memorable conflicts, both philosophical and physical. The film is less academic about it, but definitely captures the magic of a shared universe that the first Avengers film had in spades. Even if you’re not a fan of comics in general, Captain America: Civil War is an exciting and technically impressive action movie with a plot that is on the less ridiculously convoluted side for a superhero movie. Marvel continues its trend of excellent adaptations that keep the spirit of the original intact.

Comic Book vs. Film: Guardians of the Galaxy

When Peter Met Tony: The Apprentice/Mentor Relationship Between Spider-Man and Iron Man

Book Vs. Film Vs. Film: The Girls With The Dragon Tattoos

Honestly found myself rooting against Captain America in the movie after rooting for him in the comics. As this article points out his motivation is purely to keep his friend, known murderer and terrorist, Bucky out of prison. That's such a selfish motivation not even throwing in this reluctance to have a boss makes it easier to get past.

In the movie Stark is trying to keep the Avengers together rather than have the entire world's government's disband it, and literally all of the people who follow Rogers are doing it out of loyalty to him, not that they think Bucky deserves to be free. Throw in some conspiracy about more Winter Soldiers falling into the hands of a bad guy and you finally have a solid reason for Captain America to be fighting his friends but that cames much later.

I thought this was the best Marvel movie since the first Avengers, slightly better than the first Iron Man. Everyone in it is great, and the Russo's know how to make a damn good movie. Where Age of Ultron felt like a non-stop joke they balancr humor with action and drama perfectly. You also can't help feeling sorry for Tony Stark who, in the movie at least, is really not the bad guy, tries to help his friend and is just constantly betrayed during the whole film by Rogers.

Which brings us to the worst part of Captain America's entire motivation: he destroys the Avengers, betrays his friends, all to keep Bucky out of prison, who ends up in a prison anyway because he admits he's too dangerous to be free. Had Rogers just gone along with Stark in bringing in Bucky he'd have ended up in an American prison getting psychatric help. There would be less dead and crippled people. TL;DR it's hard to say Cap'n America was right in his own movie and I think that makes it even better than if he were.