Danny Rand, the Immortal Iron Fist, has a problem. He has no idea who he is, or what kind of hero he should become. His eponymous series, Iron Fist, suffers a similar setback—it cannot decide what kind of show it wants to be, even after two seasons. It uses Marvel’s tried and true formula and tries to borrow all the best bits of its predecessors, but the end result is considerably less than the sum of its parts. Why is Iron Fist the one superhero Marvel can’t spin into gold?

The show clearly has an ongoing identity crisis, one it can’t, or won’t deal with. Much like season one, it refuses to accept its roots as a mystical martial arts adventure. All of the fun kung fu movie trappings get swept under the rug in order to bring us more dour conversations between very serious people. Iron Fist tries to fill the void by emulating better shows, which only makes the contrast in quality starker. The fight scenes lack the visceral impact of Daredevil’s choreographed chaos. The drama is shallow compared to the inky depths of Jessica Jones—the characters of Iron Fist often explain their motivations out loud, as if they were reading from their own bio. And the attempts at social commentary and addressing the toxic nature of violence have already been done so much better in the second season of Luke Cage. Season two of Iron Fist tries to do a little bit of everything, but ends up doing none of it particularly well. There may be fewer boardroom scenes, but the amount of pointless dialogue and overwrought hand-wringing is undiminished.

Season two of 'Iron Fist' tries to do a little bit of everything, but ends up doing none of it particularly well.

This is particularly true of Joy and Ward Meachum, who, despite being the show’s least interesting characters, continue to command way more screentime than their tedious bickering deserves. It feels like the show sticks to them because it has no idea what Danny should be doing. This time around, Joy gets to deliver the dumbest line of the season. When confronted with her terrible deeds, she says “It’s easy to judge someone by their actions.” Not only does the line itself make no sense, there is no reason for her character to say it. People are usually judged by their actions. But even if we were to take words and intentions into account, she comes off no better. Joy’s stated reason for revenge is pure self-denial and pettiness—she wants to hurt Danny because his return inadvertently resulted in her family getting caught for all the illegal and unethical things they were doing. She didn’t spend a day in jail (or lose a significant amount of money judging by her apartment and wardrobe), but she’s still mad about a perceived slight, which is the flattest motivation a villain could possibly have.

Ward is trying to address his addiction through meetings, while ignoring the fact that he is still an entitled asshole at his core, and not a funny or particularly interesting one. The only function he serves in the main narrative is to be Danny’s walking ATM. No matter how many times he dramatically sob-mumbles through a monologue about his personal growth, I find myself completely unable care. Joy and Ward are basically stock characters from a primetime corporate drama that wandered onto the wrong set and refused to leave. Both Danny and his show would be better off without the Meachums. But the longer this season drags on, the clearer it becomes that it would be better off without Danny as well.

It cannot be understated how woefully miscast Finn Jones is in the titular role. He’s not a bad actor, but he obviously cannot fight. While he was technically more competent in season two, it is also clear that no amount of training and editing can make him appear to be one of the best martial artists in the world. This takes a toll on the writing, as the script is constantly contriving excuses for why the main character of a kung fu series cannot fight. Danny is injured, captured and otherwise incapacitated so often he becomes the damsel of his own story, unable to do anything without requiring a rescue.

In the first season, we were told he left K’un-Lun too early, without finishing his training. On The Defenders, he was literally tied to a chair and reduced to the role of a MacGuffin. Season two of Iron Fist has Danny wounded and stripped of his power for almost half the episodes. Danny is supposed to be like Bruce Lee with superpowers—common thugs should not be able to score hits on him, much less defeat him. He should have been portrayed more like Davos, who walks through a gang of triads like an open door, defeating them so quickly and efficiently that you doubt he even needs the power of the Iron Fist. The Iron Fist of the comics is only threatened by the most skilled fighters in Marvel Universe, or metahumans with crazier powers than his. On television, the Iron Fist never looks half as impressive as his costars and the stuntmen that dutifully fall before his flailing. Finally, at the tail end of the last episode, the show just gives up and hands him some guns. That’s right—the protagonist of a show called Iron Fist is now a dual-wielding magic gunslinger, with some of the laziest special effects I have ever seen. This ability is comics accurate, but it’s inserted in a way that doesn’t make narrative sense. In the books, Orson Randall, a previous Iron Fist, taught Danny how to channel his chi through weapons, including pistols. But right before he fires those glowing bullets, Danny says he’s looking for Orson Randall. That means Danny regained his powers and learned a completely new way to use them offscreen, before the start of the next season. So why is he still on his big Asian road trip?

The Iron Fist show is a tangle of sloppy storytelling, often undermining or even contradicting its own narrative. When I first saw the previews, I thought Davos’ red fist and the mentions of the Crane Sisters meant we would be delving into the broader lore of the Iron Fist. K’un-Lun is but one of eight ancient mystical cities in the comics, each with their own Immortal Weapons that all compete in an Enter the Dragon style tournament to balance the cosmos. How much more interesting would Davos have been if he had become champion of one of these other cities, so that he could challenge Danny with a skill and power to rival his own? But no, it’s all a setup so Davos can steal Danny’s power. Then we get to watch Danny frown and struggle to get it back again. Making the power of the Iron Fist a token that can be so easily traded makes it a lot less special, and diminishes its importance to the story. Danny Rand had to defeat a dragon with his bare hands to earn his power, but Davos was able to take it with an old bowl and some ink. There is precedent for this in the comics, but I don’t remember it ever being so easy or boring. 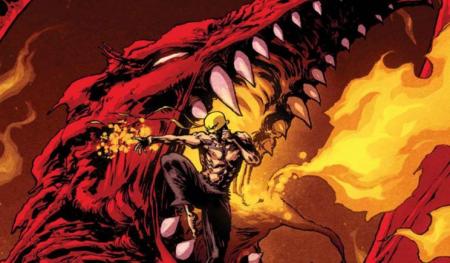 Frequently, the fun of superhero stories is in challenging the hero to use their power in new and interesting ways against more formidable opponents. Daredevil went from beating up muggers to taking down the Kingpin, and from there, to war against a secret order of undead ninja assassins. Luke Cage still fights street crime, but meets his match in the Bushmaster, a foe that’s just as strong as him and a superior fighter. Danny loses his power and his confidence so that he can struggle to prove himself worthy yet again by beating up gangsters in Chinatown.

Iron Fist does acquit itself admirably in one area: the women. With the exception of Joy Meachum, the female characters are engaging, well-written, and exert agency over their lives and the events of the story. Alice Eve is terrifyingly compelling as unstable mercenary Mary Walker, performing a range between sweet as pie and hard as nails. Simon Missick’s Misty Knight is charmingly, effortlessly badass, but it is Jessica Henwick’s Colleen Wing that completely steals the show. Not only does she act circles around Finn Jones, she has all the best fight scenes and a more interesting hero’s journey that actually makes sense. She’s definitely having the most fun of anyone on the show, and her tussle with the Crane Sisters in the tattoo parlor is the show’s single greatest delight. It harkens back to the classic kung fu pictures that inspired the comics in the first place. For a few minutes, Iron Fist isn’t ashamed to be a martial arts action show, and you get a sad glimpse of the series that could have been. It briefly shines when Colleen and Misty hit the streets together, and if you just skip to all of their scenes, it actually forms a pretty good pilot for a Daughters of the Dragon spinoff. I was much more entertained listening to them argue about snack food than I was hearing Danny and the Meachums discuss the actual plot.

Iron Fist has the tools, the resources and the source material to be a great show, on par with its Netflix brethren, but apparently not the writers. It doesn’t feel like this show is led by someone who really appreciates the source material, as most of the script sounds like a report written hours before it's due on a book never read. It apologizes and obfuscates its stranger and more supernatural nature instead of celebrating it. Ultimately, the show doesn’t seem to care about its protagonist any more than I do, and that’s a shame, because the world of the Immortal Iron Fist is so rich with potential for unique stories. They’re just not telling them yet.

Maybe a bit long, but, totally agree. But on one thing: Jones IS a bad actor. Not a terribly bad one, but very very far from a good one. The actor making Ward was MUCH better than him.
Davon also horrible, unfortunately.

And yes, the women, all but Joy, just like you said.

I will never understand why they chose a skinny martially untalented effeminate guy, who is barely able to act, for this role.

I just finished Arrow, and this show compared to Arrow is like vomit of a drunk compared to the most delicious Sushi.

Jones should be ashamed of himself. But the writers should too.