The first time I encountered Preacher was at the back of an old issue of The Punisher. There  was a page that listed upcoming releases, and as soon as I saw the description I knew I had to read this book. I don’t even recall what adventures the Punisher was getting into that month, but I can still picture the little gray box full of tiny type that introduced me to one of the finest pieces of graphic fiction ever committed to paper. Preacher went on to become one of my all-time favorite comics. Any time someone asks me for a recommendation, it’s always near the top of the list. Every time someone takes my advice, they always come back to tell me how it blew their mind, and oh my god are there more comics like this? Many of my friends who never gave comics the time of day read Preacher and saw the light. My tattered and dog-eared copy of Gone to Texas has made many converts, and I’m sure the show will make many more.

There have been plenty of hopes, rumors and false-starts associated with a Preacher adaptation for over a decade now. Fans had been teased with possible dream production teams, and tortured with terrible visions of crap versions that almost came to be (but mercifully faded from memory). When AMC announced they would be making it into a series, I didn’t dare believe it until the first episode finally aired. Now that I’ve seen a few, I’ll admit to being pleasantly surprised. It’s not the strict page-to-screen translation I and many fans had hoped for, but it is a serviceable version of the story for television.

Having grown up in an excessively devout Christian household, the idea of a preacher who didn’t just speak for God, but actually talked back to him and took him to task for his inaction was what drew me to the story in the first place.

Both takes on Preacher begin with the same basic premise—Jesse Custer, a small-town preacher with a dark past suddenly finds himself empowered with the Word of God, able to make people do whatever he says. But from there, the two properties diverge pretty severely. Mostly for the best, but there are always things that could be done better. The books often take detours with different characters, whether it be flashbacks or side-stories, but on the show these distinct chapters have been chopped up and sprinkled among the main storyline. While this is an effective method for taking more tangential source material and making it work in an episodic show, sometimes the pieces are cut too small, or placed too far apart.

For example, the Saint of Killers is one of the most iconic characters in the book, as well as one of the more fearsome villains in the history of comics. Jesse and friends encounter him in the early issues and he immediately proves an existential threat to them and their quest—he is an immortal, invincible killing machine, armed with a pair of six-guns that take a life with every shot and never need reloading. The only reason Jesse survives his first encounter with him is because he has the Word—if the Saint got the drop on him before he could speak, he’d be dead. He follows Jesse throughout the rest of the series, a constant lurking danger that must be avoided rather than fought. So when, many issues later, you finally get to the one-shot that details the Saint’s origins, you are learning the backstory of a powerful villain who has been a mystery up to that point. It increases your understanding of a character that has already caught your interest, like a reward for your diligent reading. The TV series makes the classic comic adaptation mistake of trying to tell an origin story for a character the audience hasn’t met yet. The random flashbacks to the enigmatic “Cowboy” character in 19th century Texas don’t advance the main story in any way, and have no connection to what’s happening to Jesse in the present. Sure, they’ll probably get there eventually, but until then these scenes feel like someone accidentally sat on the remote and changed the channel in the middle of the episode.

The biggest change AMC made was to the setting. In the books, when the entity bonds with Jesse, the entire town of Annville is destroyed, leaving only the Preacher alive at the center of a smoking crater. This leads to Jesse, Tulip and Cassidy traveling all over America, and even across the world, as they both flee the authorities and hunt for an absent God. On the show, Annville is just fine (except for the people who live there), and is the main setting. This leads to quite possibly the most drastic change from the source material—Jesse’s mission. On the page, Jesse decides to use his newfound power to track down God and make him answer for what he’s done. This Jesse believes in the Almighty, but is angry at him, like a son abandoned by a father. The world is going to shit, and Jesse thinks God has failed in his responsibilities to his creation. TV show Jesse still has his faith, and believes this new power is a gift from God so that he can save the souls of his sinful town.

To be honest, this is the most disappointing change to me, because comic book Jesse sets out to get justice for our misbegotten world, while his TV counterpart only seems interested in making the mostly terrible people who live in Annville feel better about their depressing lives. I’m hoping that once TV Jesse has a heart-to-heart with the angels pursuing him, his indignation at the Lord’s neglect will be rekindled. Having grown up in an excessively devout Christian household, the idea of a preacher who didn’t just speak for God, but actually talked back to him and took him to task for his inaction was what drew me to the story in the first place. While God has been referred to in an abstract sense on the show, the Big Guy has yet to be discussed or revealed as an actual character, which leads me to fear that this very important aspect of the story has been excised or watered down to make it more palatable for general audiences. I’m sure there would be a deafening outcry of the offended if a television show announced that God was going to be the villain, but that strikes me as exactly the kind of controversy Seth Rogen and company engage in just for laughs, never mind the deeper symbolism of questioning one’s faith. 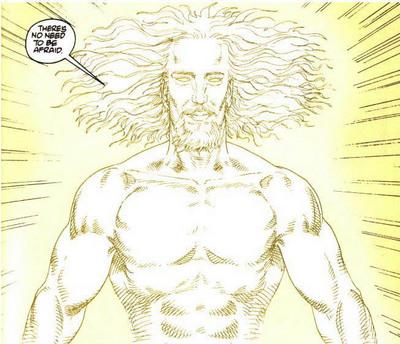 Most of the characters have been altered for the screen, some more than others. Cassidy—the sometimes unintelligible, always irreverent, punk-loving Irish vampire performed to perfection by Joseph Gilgun—remains practically untouched, and the result is a character that feels like he leapt right off the page and came to life. Our protagonists, Jesse and Tulip, have been changed the most. While Tulip is a strong-willed and passionate woman in both, AMC’s version is tougher, and a much more capable combatant from the start. She desperately wants Jesse to give up the collar and return to their old criminal ways, and she will do whatever it takes to get him back. The books start with them reconnecting after years apart. While Tulip wants to know why Jesse left her, she initially has no intention of taking him back; Jesse is the one desperately trying to regain her affection. It’s a nice reversal, and it solves a problem the early issues of Preacher had where Tulip was always the nag who was telling Jesse and Cassidy to stop having all their cool and dangerous fun. It does improve over the course of the books, but if this version had made it to the screen I have no doubt it would have spawned a social media hate campaign similar to the one that afflicted Skyler, the long-suffering wife of Breaking Bad’s Walter White.

Jesse Custer has also had a reversal of his personality. The books present Jesse as a classic bad boy—not evil, but also not afraid to break a few rules and noses. His machismo often clouds his better judgment, which makes whatever trouble he’s gotten into worse, and makes it difficult for him to reconcile with Tulip. Although he believes in God, he was forced to be a preacher against his will, and has no designs on saving any souls, even his own. But AMC presents Jesse as a reformed bad boy, a man truly trying to better himself and be a good Christian. While comics Jesse deserts the church as soon as he realizes he has the power to take on God, TV Jesse sees it as a new tool to shepherd the Lord’s flock. This makes the conflict between Jesse and Tulip more complex and interesting on TV, as there is an ideological basis to their disagreement rather than simply hurt feelings and an inability to communicate.

That might be the key to the show’s success. Rather than attempting a faithful adaptation that would most likely leave fans unsatisfied and newcomers confused, Seth Rogen and company have taken the most significant threads of the original and woven them into a new story. Imagine if you could take a jigsaw puzzle and rearrange the pieces so it formed a similar, but distinctly different picture. That’s the relationship between the two Preachers—different wholes assembled from the same parts.

Comics vs. Television: "The Boys"

I've been enjoying the show to an extent, although it's till a bit confusing even having read the comics (ex. I thought the part where Fiore and Deblanc are talking to the sheriff in their hotel room after Cassidy buries them was a flashback at first). Obviously a lot of departures from the source material needed to happen.  Odin Quincannon's fetish in the comics was a little too ridiculous, so having him listen to the sounds of cows being slaughtered is a nice way to scale it back. Also, having Tulip be a badass from the start was a smart move. In the comics she botches her first hit, and then pretty much immediately becomes an uber-competent gun fighter. The evolution was too quick, and the show was smart to handle her introduction the way it did.

Some of the changes are pretty worrisome, however. Making John Custer a preacher, making Annville a place Jesse chose to go rather than one where he was sent, having Cassidy and Tulip fuck now - those all screw up future storylines.  I'll keep watching, but I feel like they're changing some things that don't make sense.

Also, WHAT THE FUCK IS WITH CASSIDY'S EYES?  Are they worried Joseph Gilgun can't act with a pair of shades on?