Comics vs. Television: "The Boys"

I have written quite a few of these articles over the years, and it's still uncommon for me to encounter a perfect adaptation—that rare show or movie that not only seamlessly translates a story from page to screen, but also improves upon its source material on every level. Amazon’s The Boys is one such triumph. The show is more than just another dark and violent take on superheroes—it is also a withering satire of the genre’s tropes and philosophy. The tone often vacillates between absurdly serious and seriously absurd. When you’re done laughing, the sharpest jokes will leave behind some rather scary questions about human nature. If you haven’t seen The Boys yet, I sincerely urge you to go do so before reading any further, because there are going to be SPOILERS ahead.

The show and the comics both begin with a simple premise. What if superheroes existed in the real world? What if ordinary people were given godlike power? Two terrifying questions with no pleasant answers. Because in the world of The Boys, supers are worshipped like movie stars and sold like pro athletes.

Both versions open almost identically, with a normal everyman (Huey) losing the love of his life due to the negligence of a super. A crime that is quickly swept under the rug by the mega-corporation that manages all the heroes. Our grief-stricken everyman is radicalized and recruited by shadowy figure William Butcher, into a band of anti-super rogues on a revenge quest against literally the most powerful people in the world. From there, the adaptation diverges both stylistically and narratively.

The show is more than just another dark and violent take on superheroes—it is also a withering satire of the genre’s tropes and philosophy.

I must confess I was never able to finish reading the entirety of the comics, despite several earnest attempts. It surprised me to find The Boys so difficult to enjoy—I typically love the works of Garth Ennis. I include Preacher in the canon of classic comic books, and his run on The Punisher is one of my all-time favorites.

But none of his other books are as aggressively abrasive as The Boys. Characters are always discussing or performing disgusting acts, sometimes both at once, and before long it ceased to surprise me. An entire character arc is spent setting up a gag about a Batman analogue being a closet pervert with a secret desire to sodomize the young men he recruits as sidekicks—a joke that is old enough to be my grandfather. The books tried so hard to gross me out over and over again, every page screaming “ISN’T THIS FUCKED UP?” until it exhausted my ability to care. The show scrapes off that greasy film of forced edginess so the concepts and characters underneath can shine. And while Amazon’s version of The Boys still has its shocking moments and graphic violence, it distributes them more evenly so all can have an impact.

Both the books and the show tell us that superheroes are created by a drug known as Compound V. There are no radioactive spiders or rockets from dying stars in the world of The Boys—superheroes are just the fallout of one corporation’s illegal human experiments. Where the two versions differ is in how they handle this important information. The books front-load all of this exposition so that Huey can be juiced up and ready for superhuman combat in just a few issues. Compound V is barely a secret in this world—Butcher doses every member of his crew, and even hookers use a knockoff version of the drug in order to survive intimate contact with a super.

By contrast, the show spends an entire season slowly unveiling this particular piece of intel. Compound V is first mentioned as an unconfirmed rumor in the pilot, and is revealed to be scientific fact via a lab full of results by the finale. The mystery makes the audience want to learn more about the world, and adds the dramatic tension that is often lacking in the source material. The titular gang of unlikables are slightly more sympathetic when they aren’t superpowered bullies just like their adversaries. As a result, the stakes are also significantly higher on the show. The Boys can’t just go pick a fight with the bad guy—they have to be sneaky about it. Ordinary people plotting and scheming to hunt a superior enemy is simply more exciting than just waiting on the heroes and villains to collide for the obligatory exchange of punches.

General audiences are much more superhero literate than they were back in 2005, allowing the show to play with and subvert preconceptions of the genre and interrogate its central theme. Unlike most traditional superhero adaptations, The Boys has some interesting things to say about the nature of power. Just like in real life, it corrupts. We learn this through a series of vignettes about each of the superheroes and their personal falls from grace:

—Starlight feels ashamed to have compromised her principles on her first day at superhero headquarters, but even speaking out against her harassment only enriches the corporation profiting off her image.

—Queen Maeve truly wants to help people, but is also willing to let a lot of heinous shit slide in order to protect her brand.

—Super speedster A-Train is completely unable to accept that his actions have consequences, blaming others for crimes he committed himself.

—William Butcher embarks on an ill-advised quest to hurt the supers at any cost, just so he won’t feel powerless anymore.

—Homelander, a dark parody of Superman, believes that since he has the ability to do whatever he wants, he also has the right. He dooms a plane full of civilians with his incompetence, then literally drapes himself in the American flag as he twists the public narrative to his political advantage. 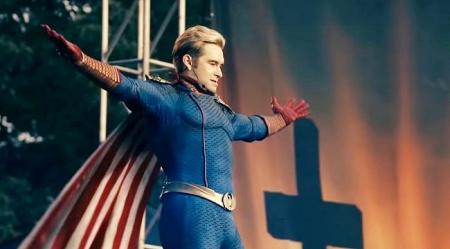 At its core, The Boys is about power addicts. No matter how idealistic or morally upright a character may appear to be, they are all twisted by the influence of power. In future episodes we will likely see just how far each of our so-called heroes will go to hang onto it.

The Boys is an adaptation that manages to walk that fine line between accuracy and accessibility. It’s that rare unicorn that actually improves upon the source material, so much so that I would recommend the series over the books for a newcomer. Whether you’re a fan of the original comics or not, you will find a lot to love. The strongest ideas and most fascinating characters from the books are all there. The show just repackages them into something a little more palatable, and it does this without sacrificing the story’s satirical edge. It is the kind of work that will no doubt inspire generations of copycats. I sincerely hope The Boys ushers in a whole new wave of postmodern superhero stories onscreen, but until then, I’ll just be grateful if the show lasts more than two seasons.