On January 1st, 2020, the BBC debuted yet another version of Dracula, this one from Doctor Who and Sherlock collaborators Steven Moffat and Mark Gatiss (Netflix made the full three-part miniseries available to view on January 4th here in the U.S.). Moffat and Gatiss have stated that this new adaptation of Bram Stoker's 1897 novel will return the titular character to his monstrous origins. In an interview with the Daily Mail, Moffat stated:

[The book has] become a mythology that loads of people have turned to their own ends. To our modern eyes, the Hammer films aren’t that frightening.

You even see Dracula in the likes of Scooby-Doo. So why not do something that takes those traditional scares seriously again?

Gatiss, who also praises the miniseries' level of gore, distances his and Moffat's Dracula from more recent screen depictions of vampires. He told The Independent:

...we’ve been through so many iterations of Twilight sorts of vampires, somehow it just felt right to be able to do castles and moonlight and capes. Horror should be transgressive. Horror over time becomes cosy. Dracula and Frankenstein, within 10 years [of their first screen portrayals] they were meeting up with Abbott and Costello...

If the insistences of its creators isn't enough to convince potential viewers this Dracula is straight-up horror, this eerie, cringe-inducing teaser should put any doubters' minds at ease.

And for a more in-depth look at the titular character, check out the full trailer:

This Count is certainly a far cry from his most recent major theatrical appearance in the critically reviled Dracula Untold, which continues the post-modern reinvention of the character as a tortured anti-hero hellbent (literally) on reuniting with his long-lost love. Francis Ford Coppola popularized this depiction of the Count in his somewhat inaccurately-titled 1992 film Bram Stoker's Dracula—inaccurate because there isn't much of a love story to be found anywhere in the author's original text, not even among Lucy and her various suitors, nor even between Jonathan and Mina, let alone between Mina and the Count, as depicted in the film (Mina is a doppelgänger for Dracula's dead wife, and possibly her reincarnation, a plot point lifted from the 1932 version of The Mummy). Rather, Stoker's true Dracula is a bonafide menace, a pointy-eared, hairy-palmed old-then-slightly-younger man with a long mustache, whose motives for world domination are murky, but seem rooted in his past life as a conquest-adept warrior. (Some critics wonder if Stoker's own motivations were a little bit xenophobic, given his narrative involves an invading foreigner spreading disease and death throughout London.) But if this more romantic interpretation of Dracula didn't originate in the novel, just where exactly did it come from? 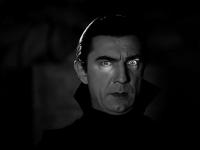 Not Coppola, of course. In part, the lovelorn Drac originates from the 1924 stage play by Hamilton Deane, later revised for American audiences by John L. Balderston. In the characters list, Deane and Balderston describe the Count as "a tall, mysterious man; polished and distinguished; continental in appearance and manner." And while Dracula does not become romantically obsessed with Mina (who was combined with Lucy and called as much in the play), this reinvention of the character as a suave and dapper Lothario paved the way for this decidedly more human depiction. After all, who can resist a charming, handsome, and seductive figure who can offer eternal life and eternal youth? Van Helsing may insist vampirism and the immortality it offers are curses upon humanity, but when weighed against the ravages of natural aging and the infirmity it can cause, becoming a creature of the night doesn't sound so bad (numerous vampire properties have addressed this basic human desire to persevere, perhaps most notably in Anne Rice's Interview With The Vampire). In this way, it isn't so much Dracula that is sexy (though he was very much established as a kind of taboo sex symbol early on), but rather what Dracula offers—the chance to live forever.

Over the years, this tango of evil and carnal lust played out on movie screens, beginning in earnest in 1931 with Universal Studio's first-of-many monster movies, Dracula, starring Bela Lugosi, who became famous for playing the Count on Broadway. According to Den Of Geek writer David Crow, women were especially fond of Lugosi's "exotic voice and precise movements," and would flock to the theatre in droves to swoon over this caped seducer. Naturally, this unconventional sex appeal carried over to film, cementing Dracula's stance in pop culture as a sophisticated and dangerously tempting sex symbol. Britain's Hammer studios carried the torch (or rather, reignited it) nearly 30 years later with their Horror Of Dracula (1958), starring Christopher Lee in the title role, a film that combined Universal's gothic sensibilities with Grand Guignol blood and guts. Right alongside this uptick in violence, Hammer injected loads of sex into their picture. Crow notes:

...under the shockingly bright color palate of the Hammer films (all the better to accentuate the red splatters), Lee’s classical approach was forcibly evolved (or undermined) by something vital to Hammer’s mostly teenage male audience: Nubile young victims. If Stoker viewed the vampire as a metaphor for the destructive power of sexuality (saintly women once bitten would turn into fallen street-walking angels), and Lugosi’s hand gestures made theatergoing female patrons swoon, Lee would give boys something to gaggle over as well when Dracula’s mere presence would send the countless, buxom young peasant women into frenzied ecstasy.

With sex and violence (or sex and death) now melded, the next logical evolution for the character was simple: tone down Dracula's brutality and make him a more sympathetic figure, one not only sexually viable but emotionally as well. As Crow observes, broadly speaking, by the 1970s, when Lee's reign as the Count came to an end, there was a movement among men to become kinder, gentler, and more sensitive. This sensibility crept its way into the aforementioned Interview With The Vampire, where the vampires Lestat and Louis think and feel on an emotional level far beyond Lee's marauding and predatory creature ever could (or would, for that matter). Consider too George Romero's 1978 film Martin, which tells the story of a lonely outcast wrestling with his bloodlust and his need to belong. These two properties are direct antecedents to screenwriter W.D. Richter and director John Badham's 1979 adaptation of Stoker's novel, which featured Frank Langella as Dracula following his successful turn as the character in the Broadway revival. Here, for the first time, do we see the story presented as a kind of tragic love story, where Lucy—once again swapped for Mina—feels not only lust but love for the vampire, especially since her fiancée Jonathan (Trevor Eve) is a categorical dud compared to the sensitive and swoon-worthy Dracula (we see this trope in dozens of romantic dramas and comedies, where the leading man-schlub must step up his game or else lose his lady to some clearly superior competition). Thus, 1979 marked the year that what Crow calls the "Bleeding Heart" of Dracula began to beat. 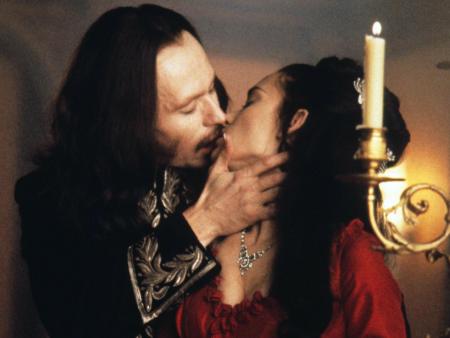 However, much like the character himself, patiently but menacingly awaiting his resurrection, it would take another decade and some change to see the tragic love story of Dracula reach its full, operatic potential. While cinematically speaking, Drac was more or less taking a nap throughout the 1980s, he came back in style with Coppola's aforementioned Bram Stoker's Dracula, with the always heavy makeup and prosthetics-friendly Gary Oldman suiting up in the role. Coppola and screenwriter James V. Hart scripted a new prologue to the tale that further connects the character to Vlad the Impaler. Dracula is now a celebrated warrior who loses his wife (Winona Ryder, who also plays Mina) to a Romeo And Juliet-esque suicide (she mistakenly believes her betrothed to be dead). Seeing her death as a cosmic injustice, Drac renounces God and devotes his life to evil. It is only when he spots a photo of Mina in the possession of Jonathan (Keanu Reeves), that he travels to England, not hellbent on revenge, but rather on reuniting with his long-dead bride. Much like in the 1979 version, Dracula offers Mina sophistication and sensuality, two things stuffy and proper Jonathan just cannot muster, and we find ourselves rooting for their love rather than feeling appalled by it.

Since Coppola's film, the tragic love story angle has found its way into every major new incarnation of the narrative, from the horrendous Dracula 2000, to the short-lived Dracula TV series starring Jonathan Rhys-Myers as the Count, and the anime Castlevania, to name but a few (we already talked about Dracula Untold, which should have remained untold). With their new BBC adaptation, Moffat and Gatiss are the first to break this mold in nearly 30 years. Time will tell if their retelling will enter the pantheon of great game-changing Dracula properties, or if, the next time someone resurrects the Count, he'll have his bleeding heart intact once again.

In the episode on the ship, he drinks the blood of the navigator b 192.168.1.254 oy to learn Ger hotmail.com man, but then the woman (Austrian countess) mentions how her mother disappeared the night when she danced wi 10.0.0.0.1 th Dracula, which implies that he killed her mother. Her mother certainly spoke German. Thus, he didn't need to drink the guy's blood to speak German. Also, if he has been to Austria or wherever they met with the Austrian countess, there must have been other German-speaking people who fell victim to Dra  cula. Hence, it seems like a plothole.