On January 10th, 49 BC, Julius Caesar led a legion of soldiers across the Rubicon river into Italy, an act of insurrection that started the Great Roman Civil War. Roman historian Suetonius gives this apocryphal account:

Caesar overtook his advanced guard at the river Rubicon, which formed the frontier between Gaul and Italy. Well aware how critical a decision confronted him, he turned to his staff, remarking: ‘We may still draw back: but, once across that little bridge, we shall have to fight it out.’ As he stood, in two minds, an apparition of superhuman size and beauty was seen sitting on the river bank playing a reed pipe. A party of shepherds gathered around to listen and, when some of Caesar's men, including some of the trumpeters, broke ranks to do the same, the apparition snatched a trumpet from one of them, ran down to the river, blew a thunderous blast, and crossed over. Caesar exclaimed: ‘Let us accept this as a sign from the Gods, and follow where they beckon, in vengeance on our double-dealing enemies. The die is cast.’

Of course, Caesar was known to have suffered from epileptic seizures, so it's entirely possible he did see a trumpet-stealing gargantuan lead him across that river. Regardless, the idiomatic expression crossing the Rubicon has become synonymous with the point of no return.

American author Steve Erickson is like a literary version of Julius Caesar. He is, to paraphrase Paul Auster, a writer who routinely crosses the Rubicon of the imagination. He eschews traditional storytelling in favor of surreal dreamscapes and circular narratives, which one could easily believe were inspired by epileptic visions. The images appear in his head and sound the charge; the die is cast and readers have no choice but to follow. Once that line is crossed, there is no going back, because no one tells a story like Erickson.

Despite their structural anomalies, Erickson's novels do have a narrative arc, which is rooted in the emotional journey of the characters. Sure, those characters may inhabit multiple bodies, or phase in and out of time and place, but their stories have a definitive beginning and end. Sometimes they just happen to be one and the same.

Not much has been written about Erickson's personal life. He was raised in LA, the only child of an actress and a photographer. He had a bad stutter, which caused teachers to believe he couldn't read. In fact, his bio on Wikipedia used to contain an anecdote about how he wrote his first story at the age of seven, only to be accused of plagiarism. That info has since been scrubbed, but when asked about its veracity Erickson said it was scarily accurate for Wikipedia.[2] He eventually overcame his speech impediment and would go on to bequeath it to a character in his first novel. But before so burdening Adrien/Michel, he would earn a Bachelor's in film and a Masters in journalism from UCLA. He supported himself as a freelance writer until Days Between Stations was published in 1985. 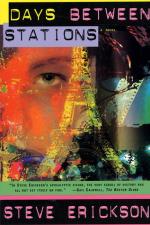 With Erickson, the best place to begin is at the beginning. His debut novel, Days Between Stations, gives the uninitiated a good idea of what to expect from the author both stylistically and thematically, and introduces a number of motifs that recur throughout the rest of his work: apocalypse, amnesia, film and filmmaking, the estrangement of lovers and family, the city of Los Angeles. The plot is almost impossible to summarize, the back of the paperback frustratingly abstract:

In a world of cataclysm and unraveled time, a young woman's face, a misbegotten childhood in a Parisian brothel, and the fragment of a lost movie masterpiece are the only clues in a man's search for his past. Steve Erickson's Days Between Stations is the stunning, now classic dream-spec of our precarious age — by turns beautiful and obsessed, haunted and hallucinated, in which lives erotically collide, the past ambushes the future, and forbidden secrets intercut with each other like the frames of a film.

But don't let that deter you. Days Between Stations is rich in detail and inventive to a fault, as is the rest of Erickson's work.

If you're not going to read Erickson chronologically, this is the next best place to start. Published only a year after Days Between Stations, Rubicon Beach is considered Erickson's breakout novel, even though it is currently out of print and has been for some time. It starts off as a sort of post-apocalyptic horror noir, then morphs into a South American adventure story cum fish-out-of-water Hollywood yarn, before finishing up as an alternate 20th century piece of Americana. It sounds like a mish-mash, but this is one of Erickson's more accessible early works. The Rosetta Stone to its interpretation is the book's title, and if that's not enough, there is this simple yet eloquent summation at the end:

He made a mistake once. I don't know if he knows it. He was standing on the banks of a river listening to something from the other side, something he had never heard but always known. And instead of crossing the river, he listened for as long as he could stand it and then turned his back and returned the way he had come. And he's never heard it again. He should have crossed that river. 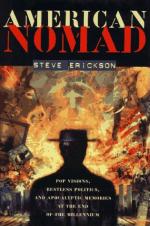 I could have easily listed Erickson's third novel, Tours of the Black Clock—a story in part about a ghost who used to be Hitler's personal pornographer—next on this list. But that same year saw the publication of Leap Year, the first of two Erickson books on American politics. You'll find Leap Year in the non-fiction section (if you can find it at all), but that categorization should be applied loosely. Erickson blurs the line between journalism and fiction in a way that would make James Frey go back to drugs just to have another story to tell. But nothing in Leap Year is a fabrication. It is Erickson's account of how he followed the 1988 presidential campaign in his car, with Sally Hemings—the slave and lover of Thomas Jefferson—riding shotgun. It is as insightful and original as it sounds.

Eight years later he would do it again with American Nomad. What started out as an article for Rolling Stone on the 1996 presidential campaign turns into the memoir of an apocalyptic roadtrip across the 20th Century. Again, Erickson mixes fact and fiction—a blend that got him fired by a confused Rolling Stone—this time into a speculative story on the future of American politics. Like Leap Year, American Nomad shatters every single preconception of what journalism is, and is not only a time-capsule of a time and place, but a timeless account of America as a country. 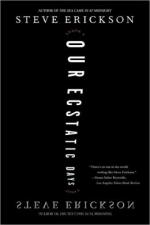 This was another entry where I wanted to cheat and list two books. Our Ecstatic Days is a sequel, of sorts, to The Sea Came In At Midnight, published six years earlier. I say "of sorts" because although they share a main character, the two novels tell two very different stories, and can be read independently of one another. The Sea Came In At Midnight again sees Erickson interweaving multiple storylines, one of which focuses on Kristin, a teenage girl who answers a personal ad and moves to LA to become the sex slave of an apocalyptologist. Our Ecstatic Days is the story of an adult Kristin, who sacrifices herself to a mysterious lake to save her infant son. The character of Kristin becomes two, one of which recovers her son, while the other becomes The Queen of the Zed Night, Dominatrix-Oracle to the lake. When Kristin dives into the water, she "swims" through the rest of the novel in a [continuous] sentence that cuts through the remaining text and remaining story and the next twenty-five years...[2] The sentence runs from page 83 through page 315, where it rejoins the narrative as the two Kristins converge. It is a little challenging to navigate—Which do you read first? The sentence or the rest of the book?— but overall the effect is quite spectacular. 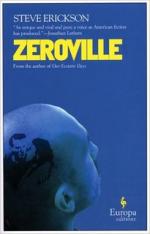 Zeroville is easily my favorite Erickson novel. It tells the story of Vikar Jerome, a "cine-autistic" who steps off a bus in Hollywood California in the year 1969. We follow him through the ensuing decade of Easy Riders and Raging Bulls and beyond, as he experiences the transforming culture of sex, drugs and rock n' roll, searching for frames of a lost film that exists in all films.

Zeroville is a love letter to cinema. As a UCLA film grad, life-long movie obsessive, and film critic for Los Angeles Magazine, Erickson is the perfect person to take us on this journey. As a novelist of very specific talents, he also brings a completely unique perspective to a decade that has been scrutinized to death and back to life again. He populates the novel with actual cinematic figures, some named, some not, and trivia buffs will delight at the prospect of figuring out all the cryptic references. For the film-lover and book nerd alike, this novel is pure joy. It is also another great starting point for the Erickson virgin.

If none of this excites you as a reader you're probably a corpse, someone who likes their literature as turgid as their decomposing body. If you are on the fence, I hope this primer is the kick in the ass that sends you tumbling over the edge. I've been trying to refrain from hyperbole, but there is literally no other writer whose work excites me the way Erickson's does. He is a singularity. I'd say I wish more writers would write like him, but that would be a lie. I'm glad he's a one of a kind. Can I guarantee you'll like what he does? No. There's a good chance you'll hate it. But that doesn't mean you shouldn't give it a try. Erickson is a risk-taker, and readers should be inspired to take their own risks and read his stuff. If no one took any risks—readers or writers—there would be no more great novels.

Primer: What You Need to Know About Steve Alten’s ‘Meg’ Series Before Seeing the Movie