Thanks to some leaked test footage that went viral a year ago, we’re finally getting a full-fledged Deadpool movie, and if the trailer (and the trailer for the trailer) is at all an accurate representation of the final product, it’s the one he so richly deserves. Despite being one of Marvel’s most-beloved characters, he has gone relatively unknown in other mediums, and tragically mistreated by most attempts at adaptation. He had a blink-and-you’ll-miss-it appearance on the X-Men animated series of the 90s, and has made few guest appearances in Marvel cartoons ever since. Nolan North voiced him in a show-stealing performance in the animated short Hulk vs. Wolverine, and reprised the role in the Deadpool video game, which had some very funny jokes, but was absolutely no fun to play.

Ryan Reynolds’ first foray as the Merc with a Mouth was a forgettable cameo in the best-forgotten X-Men Origins: Wolverine. But the actor has apparently been a huge fan and champion of the character, and is largely responsible for the movie getting made at all. From what we’ve seen so far, Reynolds is crushing it. If you are not a reader of comic books, you’re probably wondering who the hell this Deadpool guy is and why the internet is so excited that he’s getting his own movie. Let’s dig in.

Deadpool’s backstory is subject to a lot of interpretation, so much so that even the character himself has admitted that his history is entirely dependent on which writer the reader prefers. But the basics are thus: Wade Wilson was a wisecracking mercenary/soldier with inoperable cancer who was recruited/volunteered/shanghaied into the Weapon X program, the same top-secret military project that gave Wolverine his adamantium bones. The scientists managed to transplant a refined version of Wolverine’s healing factor into Wilson, which turned him into an unkillable killing machine. Of course, there were side effects. Having a brain that is constantly being devoured by cancer only to be regenerated again drove Wilson insane, and he was thrown into the “dead pool”— the final destination for Weapon X’s failures, where they were subjected to increasingly torturous experiments while the staff placed bets on which one would die next. After Wilson’s daring escape, he took on the moniker Deadpool as a dark joke on his origins and started working as a mercenary for hire. While you might not think so from that story, Deadpool is a comic relief character, a parody of anti-heroes full of pop culture references, slapstick violence, and metafictional in-jokes. Here’s a guide to some of his best stories. 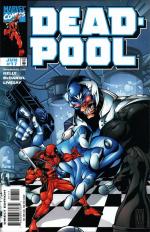 If you want to familiarize yourself with events that will likely be covered in the movie, this is a good place to start. You’ll learn about Wade’s history with the Weapon X program and get an introduction to many of the characters revealed in the trailer, most notably his nemesis Ajax, his tech-support pal Weasel, and his hostage/prisoner/roommate Blind Al. It also firmly establishes many of Deadpool’s standard tricks and tropes. He’s aware that he’s a comic book character, frequently breaking the fourth wall to do things like remind readers what happened last issue, complain about the writers, or dissect common (or overused) narrative devices—all things that could make for a pretty fun movie. But his metafictional awareness isn’t played solely for laughs. While the reader might view his clever quips and cartoonish acts of violence as goofy fun, to the other characters around him Deadpool is simply a dangerous, unhinged psychopath that might kill, torture or maim anyone for any reason that amuses to him. It’s a rare degree of complexity for a character that started as a silly joke. 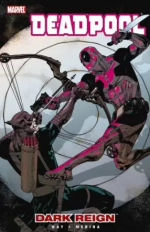 In comic books, superpowers almost always come with a terrible drawback that the hero must bemoan every chance they get. Cyclops can’t look at anything without his special glasses for fear of obliterating it. The Thing is super strong and practically invincible, but he’s got orange rocks for skin. Deadpool and Bullseye don’t really have that problem. Sure, the former might look like “a testicle with teeth,” but it’s endless fodder for his self-deprecating humor. The latter is a homicidal maniac who “never misses,” but he loves the challenge of trying to kill superheroes with playing cards and paperclips. Both of them think their powers are awesome, and revel in every chance to show them off. When Norman Osborn, the former Spider-Man villain who managed to become the director of S.H.I.E.L.D. for a while (long story), sends the inescapable assassin to murder the mercenary that can’t die, the result is a battle of ever-escalating absurdity as Marvel’s least-sane killers pull out all the stops. What would be a harrowing life-and-death struggle between two bitter rivals in any other comic eventually becomes a twisted bromance as you realize that Deadpool and Bullseye never have more fun than when they’re fighting each other. 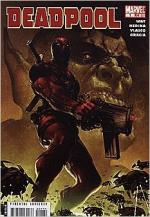 When Spider-Man finds a bunch of dead mobsters on his turf and the ballistics show they were all killed by one impossibly acrobatic gunman bouncing around the room, Deadpool is his first suspect. After their obligatory fight, Spider-Man learns Deadpool couldn’t have done it and begrudgingly accepts his help in tracking down the real killer. Deadpool immediately recognizes the handiwork of Hit-Monkey, a highly trained, triple pistol-wielding chimp that only hunts other assassins. Using the Merc with a Mouth as bait, they set a trap that touches off a series of ridiculous fights with the killer monkey, intercut with flashbacks of the simian’s all-too-sad origin story. As always, any story automatically becomes 100% funnier with the inclusion of a monkey. 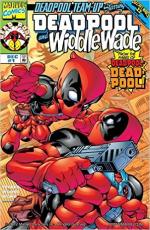 At some point in his extensive career as a contract killer, Wade Wilson lost a hand in Japan and never bothered to retrieve it since he could just grow another one. The Yakuza recovered the severed appendage and used the DNA to clone their very own Deadpool, but they only had enough to make him one-fifth the size of the original. When they lose control of their midget super-assassin, the real Deadpool is hired to take out this miniature version of himself, who he affectionately nicknames “Widdle Wade.” 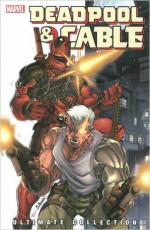 Cable and Deadpool:  Deadpool vs. Cable, and Himself

The destinies of Cable and Deapool became inextricably intertwined after a teleporter accident, and the unlikely pairing of these former enemies (they fought in Deadpool’s first-ever appearance) went on to become one of the most enjoyable team-ups in comic book history. Cable, the grizzled war veteran from a post-apocalyptic future with impossibly huge pecs and plenty of guns to match, is the epitome of everything Deadpool parodies, and a perfect straight-man for Wade’s antics. But unlike many buddy comedies, he’s not just a punching bag for jokes. Spending more time with Cable, who is desperately trying to save the world from his terrible future before he dies, also has an unexpected effect on Deadpool. Suddenly stealing and killing things for money isn’t as satisfying as it used to be, and Wade makes a serious effort to become a real hero and actually do some good. Ironically, standing up for what he believes to be right eventually puts him at odds with the man who inspired him. Few series are consistently amazing for fifty issues, and I highly recommend you read every last one. 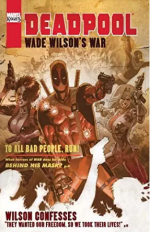 After the bloody massacre of a South American drug cartel results in extensive collateral damage and civilian casualties, Wade Wilson is brought before a senate intelligence hearing in handcuffs to tell the government what the hell happened. He claims to have been part of the slaughter south of the equator, which was carried out by an elite black ops mercenary team that has been doing the United States’ dirty work for decades, without any oversight or the knowledge of the incredulous senators. The American people demand answers for this atrocity, and we finally get to hear the sordid tale of the Weapon X program in Wade’s own words. Deadpool, Bullseye, Domino and Silver Sable were problem soldiers who were given one last chance to serve their country by “volunteering” for experimental procedures that turned them into a crew of ultimate badasses. While this is fairly well-worn territory in the comics, what makes this version so interesting is that Deadpool is one of the most unreliable narrators in the history of fiction. As he recounts what an awesome time they had wreaking mayhem in the war-torn corners of the world, his testimony is intercut with flashbacks of the team in action, as well as glimpses of alternate scenes that contradict what he’s telling the committee. By the end, the reader is just as befuddled as the blindsided senators, but considerably more entertained. This one is a personal favorite, and at only four issues long, it’s a perfect intro for newcomers who want to know what this “Deadpool” guy is all about.

These six stories showcase the very best of Deadpool, but honestly, you can pick up most anything with him in it and be laughing hard enough to hurt yourself before you turn the last page. If I left out one of your favorites, be sure to tell me about it in the comments. In the meantime, the fans will be keeping our fingers crossed that the movie can deliver on all of its promise.

The Weird World Of Marvel What If's