Aristotle and Oscar Wilde walk into a bar. Wilde orders the establishment’s finest absinthe, Aristotle picks a top-shelf merlot. A few sips in, they get into an argument about art and life and mimesis. Stop me if you heard this one before…

Wilde’s essay, "The Decay of Lying," was like the modern-day equivalent of calling someone out via social media. We can only imagine how Aristotle would have responded. Probably not with a GIF.

No one knows more about this age-old argument than local Cincinnati writer and actress Sheila Mudd Baker. Her writing and acting talent is such that a local film production team came together to turn her play, The Old Ladies Next Door, into a short film. But this isn’t your typical fairy tale of playwright’s script meets (good) indie film. Incredibly, this light comedy reflects Baker’s daily battle with amyotrophic lateral sclerosis (ALS).

Baker’s script was the product of a local writing class, and the subsequent film project became a magnet for local talent determined to work with her. It’s a buddy film at heart: two lifelong friends of a certain age learn about technology and use it to make a quick (not so legitimate) buck. But when talented director Joe Zappa was adapting Baker’s play to the screen, he rewrote Baker’s role, Marbeth, to be a recovering stroke victim. This means that Baker was able to use her declining speech as a means of method acting. And she managed to translate her determination, struggle, and even humor in such a realistic way that she nails the absolute shit out of the role.

This collaborative effort showcases Sheila’s skill and commitment, allowing her true talent to show through the disease. To say that she focuses on the positive and doesn’t give up is truly the world’s biggest understatement. Not only that, but she uses her darkest daily struggles to create real art when she could have let the blackness swallow her whole. Baker is doing the kind of work that delivers inspiration to the world around her. As long as the world around her is willing to take a quiet moment to pay attention.

A good writer can find inspiration everywhere. Maybe I’ve not been to Paris, but I have strong interests on French culture and sex, which can be used to write a story set in a Parisian brothel. For the rest, there is research. But remember that we can always dig through our lives (however boring/depressing/meaningless they may seem at the time) and come up with something to use in a good story.

Baker's Facebook page is a wonder. She shares articles on new research in ALS and other diseases, and she uses her social media reach to raise money for research. She also posts her own creative musings, which include gratitude lists. Things like: I regained three pounds; I can still walk twenty feet with a walker; It is a beautiful June day; I attended my weekly book club; My nurse's aide gave me a shower...

Some of my artist friends have sometimes shared with me how their multitude of problems are keeping them from reaching creative fulfillment. They aren't finding time to write/sing/paint/act/whatever, people aren't giving them the opportunities they deserve, they feel depressed and can't create because the muse has abandoned them, etc. I have also told all of these things to myself. It's what I do when reality TV oblivion holds more power over me than working on my art, or the couch is more appealing and easier than going on a run on a gorgeous day.

I admire those who have experienced the horrors Sheila has gone through and still manage to create. Sheila has taken one of the most ravaging, brutal diseases and used it to bring energy to her art. Since this film's premier earlier this year, she has now lost her voice and much of her mobility. But she keeps fighting, thinking, writing, sharing, inspiring.

For those of us who forget that we have anything to push us forward, take a look at those who are using their hardest battles to shed light on the life their art imitates. Kick your ass out of bed and achieve the writing goals you want to achieve that day. Continuously. Even after seemingly endless failures and challenges fill our creative plates, all we can do is keep writing, keep creating—if that's what we desire.

The Ladies Next Store is now available free on Vimeo. Stream it here. 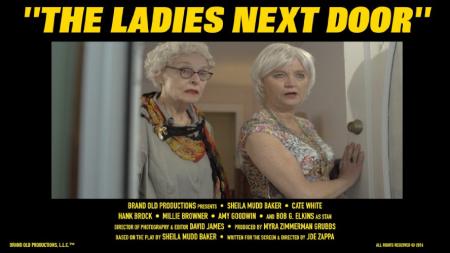 Marbeth (played by Baker) has spent a year in therapy recovering from a stroke. When her granddaughter wants a French bulldog for her birthday, Marbeth stops at nothing to make her slightly spoiled little angel’s dream come true. But French bulldog’s aren’t cheap, and so Georgie (played by Cate White in her film debut), Marbeth’s best friend and sexually starved roommate, steps in with a few business plans. It’s not long before Georgie pushes a move to small-time crime, conning “handsome young bucks” into taking them for meals and other fine luxuries. Georgie sometimes leads the duo astray, hiring handymen just to watch their backsides as they work, but her reasoning is solid enough (“He’s just giving our entrance a good hammering”). In Georgie’s latest scheme, male clients pay the “scoldin’ granny” to listen to their dark deeds over the phone in exchange for some Granny-style discipline and humiliation. Marbeth is at first horrified, but quickly changes her tune. When she sees how lucrative it can be, she tells Georgie: “I hear April in Paris is lovely.”

Holly Slater is a freelance editor and writer. She slowly built her business at espressoeditor.com until that glorious day she was able to quit her regular job and venture into the world of full-time freelancing. She loves to tell you everything that’s wrong with your book, but she’s super-duper nice about it. Holly holds a B.A. in English and creative writing from Southern New Hampshire University and has been editing and writing for ten years. Her short story collection, Sweet Violent Femmes, is a display of bizarre erotic horror with a feminist bent. Holly lives in Cincinnati with her filmmaker fiancé and her talented theater-performing son.

5 Dramatists as Novelists: The Joy of Reading Plays

The 10 Worst Things About Shakespeare

5 Reasons To Hire A Freelance Editor, and What To Do When You Can't

The Mini-Guide To Writing Sex For Your Genre