This year, The BBC is bringing us an epic miniseries adaptation of Philip Pullman’s His Dark Materials. When this year? No one knows! The teaser released in February says “Coming Soon,” but for fans of the YA fantasy trilogy who have been waiting for a real adaptation of these books for twenty years (sorry, no, the 2007 film does not count), it can’t come soon enough.

But what if you’ve never read the books? (Okay, that’s easy enough: read them! Read them right now! They’re brilliant and riveting, some of the best philosophical fantasy since Tolkien!) OR what if you read them well over a decade ago and are having trouble remembering the finer details?

I’ve got you covered! And unlike Wikipedia, I shall endeavor to do so without spoiling you to any of the series’ most important particulars. After a recent and very rewarding re-read, here’s everything you need to know (or remember) about His Dark Materials before watching the BBC miniseries:

Book One: "Northern Lights" (UK title) or "The Golden Compass" (US title) 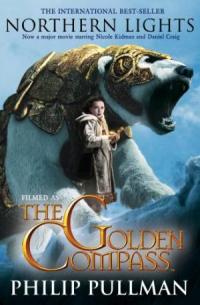 Meet LYRA BELACQUA, a spunky, fearless, twelve-year-old liar running wild with her best buddy ROGER over JORDAN COLLEGE, a campus that’s part of a university network very similar to Oxford in a theocratic world sometimes quite similar to ours. But it isn’t ours. In Lyra’s world, every person has a daemon, an external animal manifestation of one’s inner soul. Lyra’s daemon is named PANTALAIMON, and because she hasn’t yet matured into adulthood, Pantalaimon’s form is unfixed. Sometimes he’s a mouse, or a moth, or an ermine, or a bird. But regardless of his shape, he remains Lyra’s best friend, her conscience, her voice of reason and source of comfort. Like all humans and their daemons, Lyra and Pantalaimon are irrevocably linked – distance of any kind causes them actual physical pain and severe emotional distress.

Lyra’s untamed childhood is interrupted by the arrival of her aristocratic adventurer uncle, LORD ASRIEL. Through spying and subterfuge (two of Lyra’s best-loved and most-skilled activities), Lyra learns about a substance called DUST, a metaphysical substance that has THE MAGISTERIUM, the Church that rules everything in Lyra’s world, all in a tizzy. Lord Asriel is studying Dust, and Lyra’s dying to know more. So are we! But we won’t for at least a whole book.

Thanks to a crisis involving Roger, Lyra finds herself on an adventure. THE MASTER of Jordan College gives Lyra a precious item, THE ALETHIOMETER (the golden compass of the North American title), a beautiful, intricate device that tells the truth to the very few people who are able to read it. Most alethiometrists study the device for decades with the help of dozens of very large books in order to read it, but Lyra seems to have an innate knack for understanding it. This proves to be very useful over the course of the trilogy.

Lyra packs the alethiometer with her when she heads to London under the care of the elegantly chilly MRS. COULTER, a calculating and highly trusted member of the Magisterium with an unusual interest in Lyra. Lyra’s adventure next takes her on a boat with THE GYPTIANS, including MA COSTA, JOHN FAA and FARDER CORAM. The Gyptians are a warm, rustic and nomadic people who sail the canals and rivers of Lyra’s Brytain. Soon Lyra meets IOREK BYRNISON, one of the PANSERBJØRNE, sentient, armored polar bears who are talented metalsmiths and whose armor is as sacred to them as Lyra’s daemon is to her. The next friend Lyra meets is LEE SCORESBY, an aeronaut and hot air balloon captain from this world’s version of Texas. And finally, joining Lyra’s group is the beautiful witch queen SERAFINA PEKKALA, one of many centuries-old wise women who are impervious to human discomforts and fly through the sky on branches of cloud-pine.

After many trials and feats of daring, Lyra finds her way to a new world in a stunning climax that I will not reveal here! But it leads us directly into… 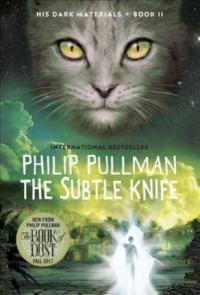 And we open in our own world! Meet WILL PARRY, a twelve-year-old boy caring for his mother, who suffers from mental illness and seeming paranoia. Will’s father has been missing for years and strange men are after his mother, so he leaves her in the keeping of a kindly neighbor, takes their most important belongings and runs away, stumbling onto a window into CITTAGÀZZE, a beautiful but abandoned city in a world that is not his, and not Lyra’s. But it does happen to be the same world that Lyra found at the end of The Golden Compass, and the two children meet up and begrudgingly decide that their interests are aligned. Cittagàzze is overrun by gangs of children, because it turns out that this world has a threat called THE SPECTRES, which feed on the Dust of adults but are both invisible and harmless to children.

Meanwhile, Serafina Pekkala and many other witches of her acquaintance, including RUTA SKADI, team up with Lee Scoresby to try to help Lyra and solve the rapidly escalating problems caused by these rifts between worlds. Lee Scoresby hears of a wise healer named STANISLAUS GRUMMAN, who is supposedly in possession of a weapon that can cut anyone or anything – the SUBTLE KNIFE of the title. While Lee seeks him out, Will and Lyra meet two new people in our world: a shady old aristocrat named SIR CHARLES LATROM, and DR. MARY MALONE, a good-hearted scientist studying what she calls dark matter, and what Lyra calls Dust.

Also, angels exist! Will meets two named BALTHAMOS and BARUCH who, near the end of the book, arrive to guide him to Lord Asriel, who is gathering forces to fight THE AUTHORITY, or what we might call God. Several more exciting things that must not be spoiled happen, and once again we are led directly into… 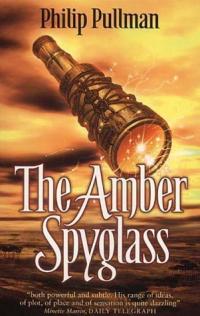 After the events of Book Two, Will and Lyra spend much of the third book separated, dealing with their own problems. Will fights the archangel METATRON and finally meets Lyra’s dear friend Iorek Byrnison. Lyra’s wrangling with Mrs. Coulter, whose motivations remain ever unclear. Dr. Malone is off on her own adventure in her own world, followed by the sinister FATHER GOMEZ. We meet harpies and miniature spies and wise, elephantine creatures called MULEFA who need Dust to survive. We meet up with ghosts of beloved departed creatures from previous books. Lyra and Will visit THE WORLD OF THE DEAD! And it all leads to a prodigious battle between the forces of The Authority and those who celebrate science, who want to know more about Dust and don’t believe there’s anything wrong with human maturity and mistakes. And speaking of maturity, the little twelve-year-old darlings we knew from the past two books grow into adults before our very eyes.

So that’s His Dark Materials for you! You may have noticed that religion isn’t given a very flattering portrayal by Pullman, and in fact he’s gone on record that he doesn’t believe “original sin” is actually a bad thing. This trilogy (also bookended by the supplementary novels The Book of Dust and Lyra’s Oxford, but neither is likely to make its way into the miniseries) is Pullman’s retelling of Milton’s Paradise Lost, and though it’s most often categorized as Young Adult, it’s one of the most profound and provocative examinations of religion, humanity and, yes, growing up you can find on any shelf.

So find it! Use the link below to grab your books and catch up before the miniseries. Sure, this primer’s meant to be helpful, but it’s not meant to replace such a brilliant read.

I love these books but I’m not sure that they come over well in the current BBC production. I tried to explain to my father - who hasn’t read the books - what was happening, but it’s very difficult to put over based on what he is seeing on the screen. The voice of Pan and the other daemons didn’t seem to match and on screen, a talking animal comes over as cartoonish - to me anyway. It’s a pity the BBC bothered because I think people will be put off by what they see and will miss out on the brilliant content of the actual books. The last few passages in the Amber Spyglass where Lyra “ grows up” are amazingly sensitive and bring tears to the eyes, I can’t see how this can be portrayed on tv in the same way.