I’ve been writing these "versus" articles for quite a while now, but I am rarely afforded a chance to make this direct a comparison. Two movies with the same premise, same goal, and even the same name, but with two very different results. The first was mostly forgettable when it wasn’t terrible, but its successor seems to have learned from those mistakes. The second film improves upon its predecessor so completely that it feels like a second or third draft of what we saw five years ago.

So let’s get this done at the top: 2021's The Suicide Squad is a superior film in almost every conceivable way. The cast, the art design, the cinematography, the dialogue, the editing—vast enhancements across the board. But in the interest of scope, I will be limiting this critique to just storytelling. Both films are about a team of comic book villains forced to take on a black bag op for the government, but James Gunn’s version tells a much more compelling story. Let’s take a look at how he does that.

Of course, there will be SPOILERS for both movies beyond this point.

The first and most glaring disparity between the two films is the pacing. 2016’s Suicide Squad wastes a lot of time at the beginning introducing and reintroducing characters without moving the plot forward. Deadshot has four intro scenes almost back-to-back, and yet all they reveal is that he’s a good shot and has a daughter. Nearly twenty minutes is spent establishing that Harley Quinn is the Joker’s paramour. The film grinds to a halt as we wait for all the supporting players to get their introduction, occasionally cutting away to Amanda Waller explaining the premise of the movie to a bunch of disinterested G-Men—and none of this teaches us anything that couldn’t be revealed in more compelling ways later. Most of what we’ve seen our antiheroes do up to this point (with the exception of the Enchantress’ escape) is completely irrelevant to the plot. After fifty minutes of disconnected flashbacks, the squad finally gets on the chopper to start their mission. The movie is halfway over before the story really begins.

The Giant Sky Beam is a supervillain with no brand loyalties, and it continues to ruthlessly murder third acts to this day. No matter how many times it is defeated, the Giant Sky Beam always returns.

By comparison, 2021’s The Suicide Squad is much more narratively efficient. The same basic premise is explained in under five minutes. Half a dozen characters are introduced and dropped into the action within ten minutes. A second squad gets introduced and thrown into the deep end of the plot before half an hour has passed. We get a great deal of character development very quickly and in a much more entertaining way, without it ever getting confusing or slowing the pace. A great deal of time is saved by jettisoning the unnecessary flashbacks—by not learning everything about a character the second they appear, we are left with questions for the movie to answer later on. This way we learn more as the story progresses, and it’s much more satisfying to discover these details organically rather than reading the character’s stat sheet when it appears onscreen. The 2021 film gives each character a chance to shine and most get an opportunity to delve into their backstory a little bit, but the exposition is more evenly spread. Only Ratcatcher 2 gets a full flashback origin sequence. The others share as much as they are willing, and the audience is left to deduce the rest from their actions. By not telling us everything from the top, the movie gives our imagination something to do.

Another area of stark contrast between the films can be found in the leads. In 2016 it was Deadshot, replaced in 2021 by Bloodshot. On paper they are essentially the same character. Both are badass mercenaries that never miss, motivated by their daughters to take Waller’s deal. But their differences are more than cosmetic. Bloodshot is a well-developed and complex character with an arc, who is changed by the events of the story. The first thing we learn about him is that he’s a terrible father, willing to let his girl go to jail until Waller threatens her with a harsher sentence in the deadliest prison in the country. He doesn’t care about his teammates and doesn’t want to be a leader, but by the end he is risking his life not only for his squad, but also innocent civilians. Deadshot, on the other hand, is just another Will Smith action hero. A bad (but not too bad) man willing to sell his services to provide a better life for his daughter—the complete cliche. He’s unflappably cool the entire time, learns nothing, and makes no character-defining decisions. If you’ve watched an action movie in the last twenty years, you know exactly what this character is going to do every step of the way; there are no surprises. Deadshot comes out the other end of his world-saving experience completely unfazed, without so much as a symbolic injury. Even though he is played by one of the most charismatic actors alive, Deadshot is ultimately boring because we know everything about him ten seconds after his introduction, and that never changes.

The supporting cast of the 2016 film is similarly flat, and that is a severe deficiency for what’s supposed to be an ensemble picture. Despite a command performance by Margot Robbie, Harley Quinn is reduced to “Joker’s girlfriend,” eagerly checking her phone for a text from Mr. J, waiting for rescue. Rick Flagg is just an asshole to everyone within range of his voice. El Diablo’s pacifism in the face of people-eating monsters makes no sense, so the scene where he finally decides to be useful feels hollow, and his death leaves no impact. Captain Boomerang almost has a moment of character development when he decides to abandon the team, but then he randomly decides to rejoin with no explanation. Killer Croc gets the shortest shrift—his big moment is reminding everyone he can swim. But the 2021 movie manages to give a complete arc to its own monster character, King Shark, who is insecure about his intellect and ultimately learns the value of not eating your friends. Croc had a real person inside that scaly suit, yet it was easier to form an emotional connection with a giant CG fish because it actually had its own tiny story going on. 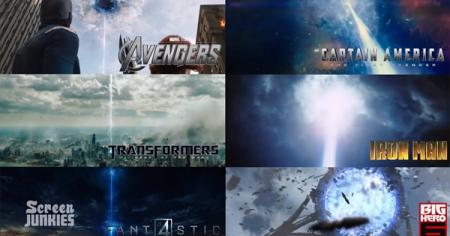 Have you seen every movie with a Giant Sky Beam?

Then there are the endings. The Suicide Squad concludes with the most overused image from the last three decades of sci-fi action movies, something so generic and cliche that it feels like a placeholder for a real ending that never got written: a giant beam of light shooting into the sky. It has to be shut down before a portal to the Bad Thing opens, just like in Avengers, Guardians of the Galaxy, Man of Steel, Fantastic Four, Thor 2, Justice League, and so on. The Giant Sky Beam is a supervillain with no brand loyalties, and it continues to ruthlessly murder third acts to this day. No matter how many times it is defeated, the Giant Sky Beam always returns.

This is where the 2021 movie feels the most like a new draft. The Giant Sky Beam is replaced with an actual monster that has a more interesting visual design and enough personality to be sympathetic. The mind-eating Starro is a real adversary for our antiheroes to battle, instead of just another machine to shut down or blow up. The squad has to think outside the box to bring down Starro, using all of their unique skills and powers together. The Giant Sky Beam can always be stopped with a bomb or a gun, or shooting a bomb with a gun, like they did in 2016.

In some ways, it’s almost unfair to compare Suicide Squad to The Suicide Squad, almost like critiquing a finished novel against its first draft. The latter movie had the benefit of learning from the former’s egregious mistakes. I’m aware of all the backstage drama that kept David Ayers from executing his vision, but I can only judge what made it to the screen. As a result, James Gunn had a blueprint of exactly what not to do, and he studied it well. The first film simply moves its cast from one plot point to the next, while the second film understands that good story flows from well-drawn characters interacting with each other and the world around them. Despite their awesome powers and ridiculous costumes, we can relate to the members of Gunn’s squad because they act like real people. Ayers’ squad is just a collection of action figures that has to be placed in the path of the plot by authorial hand. That is why the 2021 movie feels like a more complete version of its predecessor. I can think of few film pairings that make the contrast between good and bad storytelling so painfully clear. The Squads Suicide are a perfect visualization of why you should never hand in your first draft—you can always make it better with the application of time and effort.

Get Suicide Squad at Amazon

Welcome to the Suicide Squad

Girls on Film: Marvel vs. DC