At Comic-Con this year, Marvel unveiled phase two of their plan for world domination. In addition to the expected slew of sequels, they announced two movies that weren't based on any of their popular flagship characters. Instead, they went with properties that are practically unknown to people who do not read comic books. Rumors of an Ant-Man movie or his inclusion in The Avengers have been floating around since Iron Man 2, but what came as a complete surprise was the confirmation that they were going to make a movie of my favorite Marvel series of the last decade, Guardians of the Galaxy. They are a fairly obscure group—in the comics, it’s a running gag that heroes from Earth have never heard of them. But there are five good reasons to get excited about this team of galaxy-guarders coming to the big screen, whether you know who they are or not.

Remember the big smiling purple guy that showed up at the end of The Avengers, no doubt accompanied by a collective gasp of recognition from all the nerds in attendance? That was the sound of the Marvel movie universe rapidly expanding, just like when Nick Fury showed up to ask Tony Stark about the Avenger Initiative. Thanos the Mad Titan, in addition to having the greatest name in the history of supervillainy, is one of the meanest antagonists in the Marvel stable, so powerful that it almost always takes a team of heroes to defeat him. Even Loki fears this guy. When he’s on the board, an invasion of Earth is the least of your worries. He threatens entire star systems, often commits genocide on an intergalactic scale, and has even destroyed the universe once (he fixed it later). Part of the purpose of the Guardians of the Galaxy movie will be to introduce audiences to a villain who hasn’t been seen onscreen since the failed Silver Surfer cartoon. Thanos is as big as bad guys get, and his little wink at the end of The Avengers means that Marvel plans to tell us a really big story. 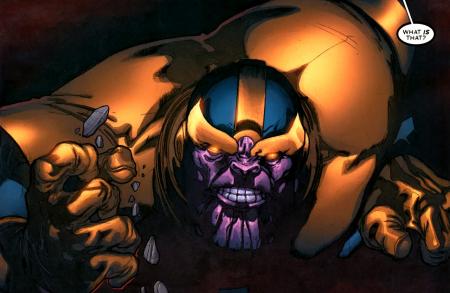 Everyone Wants To Be Star Wars

Let’s face it: everyone wants to make the next Star Wars, even George Lucas. So much so that I can’t recall the last epic space opera that wasn’t a prequel to that classic trilogy. Which is sad, because film, especially with all of the latest advantages in technology, is an art particularly suited to capturing the infinite grandeur of the genre. Comic books are the perfect source material, as all the heavyweight myth-making has already been done. The filmmaker already has a fictional galaxy pre-populated with beloved characters to work with, so it would seem making a great sci-fi epic for the ages would just be a matter of coloring in the numbers. But like so many things, it’s so much easier to make bad science fiction than good. DC clearly hoped Green Lantern would be the foundation of their next big franchise, but totally undermined the otherworldly allure of Oa by shackling their space cop to a bland and boring Earth. Marvel has a chance to avoid the competition’s mistakes as they set the stage to introduce their considerable cast of cosmic characters, and they’ve chosen well. After twenty-five issues, the Guardians have spent less than a page on humanity’s homeworld. In the pages of Marvel Comics, the universe is a vast place teeming with a crazy variety of life. The Guardians will be our tour guides to the fantastic, formally introducing us to the immensity of the Marvel Cosmos, a particularly rich area of the mythos. Moreover, should the movie succeed, it might reignite interest in silver screen space opera, and then everybody wins. Honestly, who wouldn’t go see a movie called Annihilation War? Even if you had no idea what that meant, you’d be intrigued.

Guardians of the Galaxy has done the impossible and made anthropomorphism cool again. Rocket Raccoon, Groot and (hopefully) Cosmo the Dog are the three breakout characters of the series. Not only are they hilarious, but they kick all kinds of ass. Talking animals, and one talking tree, are used for more than just humorous cannon-fodder; they are active participants in the story, fully formed characters with their own personalities and arcs. Rocket Raccoon, for example: imagine a wisecracking critter like Seth Macfarlane’s Ted running around blasting alien monsters with an unfeasibly large gun, but who is just as much a leader as he is comic relief. In no other book have I ever seen a grown man refer to a raccoon as a tactical genius in all seriousness. Groot is not merely a sentient tree, but king of a planet of self-aware flora. Cosmo is a Russian test dog that gained telepathic and telekinetic powers through unexplained means and has become the chief of security of a distant alien space station, equally capable of being both adorable and terrifying. In the books they integrate seamlessly with the more humanoid characters, and the true test of the movie will be how convincingly they create a talking dog, a raccoon version of Rambo, and a space Ent. They have the best chance of finally validating the CG sidekick, a long suffering and much maligned movie tradition of the last decade. Done right, these creatures will steal the show. Done wrong, their names will become a word of derision for annoying CG caricatures. Everyone wants to make the next Star Wars, but no one wants to be responsible for the next Jar Jar. 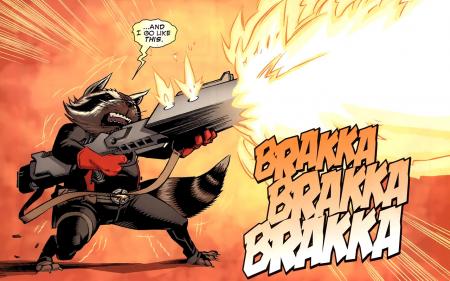 Talking animals aside, the Guardians of the Galaxy share the same kind of group chemistry that made The Avengers such a success. Drax the Destroyer is the ticking time bomb waiting to go off, Warlock is the god-out-of-water struggling to understand and protect fragile mortals, Star-Lord is the old soldier hauled reluctantly back into service, and Gamora, the Deadliest Woman in the Galaxy, has a chance to prove that strong female characters are not a one-time fluke or a passing fad. As written by Dan Abnett, the Guardians are a ragtag band of misfits on a mission, who all excel at delivering clever quips while saving the galaxy from certain doom. It’s a formula that worked well for the aforementioned franchise everyone hopes to emulate. If executed well, Guardians of the Galaxy could be The Avengers in outer space, opening up a whole new universe of stories.

The main reason Dan Abnett was able to assemble these characters into something unique was that none of them had been used in years. These characters were the survivors of the Annihilation War that had violently rearranged Marvel’s cosmic landscape, and they had nothing better to do, so why not team up? Even the name was left over from a group of heroes from an alternate future that hadn’t been seen since the 90’s. There were no storyline complications, fan expectations, or editorial constraints to contend with—the Guardians could go wherever the writer wanted to take them. The same is true of the movie. For most audiences this is a team of unknown heroes, in a setting that will be mostly unfamiliar to them. Most of these characters have never been seen on screen for more than one or two episodes of another hero’s cartoon show, so there are no preconceived notions of what should be in a film version of the Guardians of the Galaxy. Marvel can do anything they want, so let’s hope they take the opportunity to impress us with its inaugural attempt.

Guardians of the Galaxy is a fun series with limitless film potential. It’s tragic that this team of heroes does not currently have its own book, but I can only hope that will change as the film release draws near. For those interested in reading more about the Guardians, be sure to check out Annihilation, War of Kings and The Annihilators.

Juice Ica from Rhode Island is reading The Twelve by Justin Cronin & Beautiful Creatures August 16, 2012 - 9:48am

You made me most certainly curious about this series and I will be getting some of these to check out. Great article and now Im excited about the idea of this movie!