Column by Christopher Shultz September 3, 2020
In:

I’ve admittedly never read Nick Hornby’s 1995 novel High Fidelity, though the film adaptation from 2000 has long been a favorite of mine. John Cusack manages to charm as main character Rob even though he is thoroughly, as Liz (played by Cusack’s sister Joan) calls him in the film, a “fucking asshole.” But he learns not to be a fucking asshole throughout the narrative, or at least, less of one. Jack Black’s turn as Barry is easily his finest hour as a comedic actor (save maybe his guest appearance on Community). Joan Cusack has one of the funniest lines in all of cinema (the aforementioned “fucking asshole” exclamation), Tim Robbins is especially funny as a New Age hippie type, there’s a pretty great cameo from Bruce Springsteen, and of course, the soundtrack is kickin’.

Music nerds come in a variety of shapes, sizes, colors, and sexualities, and featuring them in a show about music nerds is only natural.

So upon hearing the news the property would become a television series, I had my reservations—not because the role of Rob would be sex-swapped and star Zoë Kravitz; opposing any forms of media because a role traditionally played by a man gets cast with a woman is asinine. It was simply an example of that old adage applied to many a film or TV series: “Why mess with perfection?”

As it turned out, High Fidelity most definitely needed to be “messed with,” I just didn’t know it until I watched Hulu’s 2020 adaptation. It was amazing, funny, heartbreaking, sexy, cool, awkward (not in a puerile, shocking or squirm-inducing kind of way, but in a relatable, “humans say and do some truly embarrassing things sometimes” fashion). The plotting was superb, the dialogue slick and clever without being too self-aware of its cleverness, the performances all top-notch, especially from star Kravitz, and naturally, once again, the soundtrack was kickin’. Not to mention it was a fine showcase for women of color and members of the LGBTQ+ community.

So of course, Hulu canceled it after one season.

The reasons why aren’t apparent, though I suspect the network didn’t want to pay for the music licensing necessary for a narrative like this, one that is, at its core, obsessed with music, especially if the viewership is low, which I also suspect was the case with High Fidelity. And sure, the world of music nerdom is a bit of a niche subject, but it isn’t so remote that casual viewers can’t enjoy a show centered around it, especially when the human drama is universal and relatable, as it was in this case. Plus, money’s really a non-issue when Disney owns you, and it’s better to spend a little more for something unique and important—or at least, it should be.

But Hulu didn’t see any of that, and now fans of the show can simply hope another network decides to pick up High Fidelity and give it the respect it deserves. Though it's doubtful any Netflix or HBO executives will read this humble little piece, one can hope these four reasons why Hulu made a mistake canceling High Fidelity will help to sway them into purchasing and reviving the series.

1. It Showed That (Gasp) Women Can Be Music Nerds Too

Esquire writers Brady Langmann and Adrienne Westenfeld note that the “dickish thirty-something” male who overcomes his fear of commitment became a cliché not long after the release of High Fidelity in 2000. Consider About A Boy, another Nick Hornby adaptation, featuring Hugh Grant as a “cynical, immature” man who “learns how to be a grown-up from a little boy,” according to IMDb; or Rodger Dodger, about a womanizing, smooth-talking Manhattan jackass who takes his unsuspecting and inexperienced nephew under his wing; or Friends With Kids, told from the perspective of a woman who has a child with her friend (or is he more than that?), a dickish thirty-something who chases after idealized fantasy women, rather than realizing true love stood in front of him the entire time. The list goes on.

But while there aren’t nearly as many examples of the dickish male music nerd (snob) in media, they are all-too common in the real world. And that’s why the casting of Zoë Kravitz was so inspired and necessary. Langmann and Westenfeld write:

For far too long, music has been one of the many subjects over which men feel ownership and see fit to ‘explain’ to women. How gratifying it is to see a millennial woman of color inhabit that same space of ownership, expertise, and deep passion for music. After decades of seeing women excluded from work as DJs, festival bookers, record label executives, and countless other roles in the business of music, it’s a revelation to see Kravitz’s Rob not just owning and exploring her passion, but making a living at it.

2. The New Rob Was Better Than The Old

Rob as played by Zoê Kravitz can kind of be an asshole, but not in the same way as her male counterpart. First, she does put her boyfriend Mac (Kingsley Ben-Adir) through some awful things, but those actions come from a place of brokenness and fear that we don’t fully see in John Cusack’s iteration of the character. This isn’t to say the reason for her behavior justifies her actions, but we better understand what drives her, and how her desire to be a better person, not only a better partner, can guide her to make amends with those she loves, and those she has hurt.

But that isn’t all: her nerdiness toward music is just that—not some deep knowledge of a topic she lords over others, as we see in a scene from the film when a “geek” wants to buy a Captain Beefheart record, but Barry (and by association Rob) won’t sell it to him simply because he’s a geek. Their friend Louis calls them out, calling them elitists and insisting they “feel like the unappreciated scholars, so [they] shit on the people who know less than [them].” Barry and Rob cop to this, and everyone has a good laugh, except for the geek that isn’t allowed to buy that Captain Beefheart record.

Kravitz’s Rob is that geek. She talks about music in a way that isn’t condescending, isn’t something she uses to feel superior. She’s passionate and opinionated, but also endearing, as seen when she can’t help obliviously explaining to her very confused date Clyde (Jake Lacy) that Fleetwood Mac as a band is “more about the drama” that seeped its way into their music, all the sex, drugs, and soap opera-esque shenanigans going on behind the scenes. It shows us that Rob, while cool, is also a giant dork. And that’s okay. 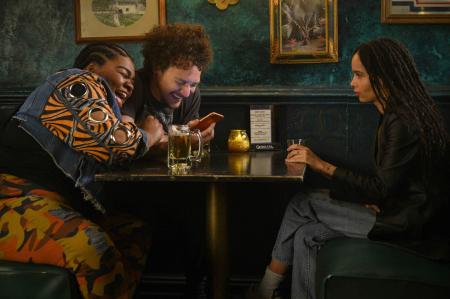 3. It Was Brilliantly Diverse Without Feeling Pandering

In addition to Kravitz and Ben-Adir, High Fidelity also starred Da'Vine Joy Randolph as Cherise (basically the Barry character), another woman music nerd with big dreams of becoming a rock star (and one who isn’t taken seriously by white rock musicians because she’s a plus-size Black woman). David H. Holmes rounded out the cast as Simon, who, like Cherise, defies stereotypes by being both gay and really into hardcore punk. Furthermore, in this version of High Fidelity, Rob is also bisexual. This veritable rainbow flag of non-cis-white-male-ness never feels pushed or inauthentic, precisely because their “differences,” their departures from the “norm,” echo reality. Music nerds come in a variety of shapes, sizes, colors, and sexualities, and featuring them in a show about music nerds is only natural. To wash it in whiteness and dongs would be a strange thing to do.

While the first season of High Fidelity was fairly self-contained and most of the narrative threads were wrapped up, audiences were left with a sort of cliffhanger when Rob chooses to pursue Clyde over Mac—a decision we know would have blown up in the second season, because she’s clearly still in love with Mac, and he’s clearly still in love with her. It’s another example of the show’s overarching theme, that humans constantly make dumb decisions and hurt others in the process. It’s not a cynical end though, it’s just the truth, and it’s a truth from which we can learn, if we’re willing. Moreover, we caught only the slightest glimpse of Cherise's upcoming story arc, one that would see her moving quickly toward that musical stardom she so desperately craves, a situation that would have continued the hilarious and heartfelt journey the character began in season one.

Hulu could have at least given audiences one more season to allow Rob to truly learn her lessons, whether she ends up getting back together with Mac or not, and given us the Cherise story arc she deserved. Instead, we’ll forever dangle over this cliff, unsure if we’ll get pulled back up to solid ground or if we’ll fall.

Unless, that is, some other network can do what Hulu couldn’t, and give us the second season to this wonderful series.

A Guide to the Literary And Cinematic References in 'Castle Rock'

The Shaky Return And Possible Season 2 Missteps Of "American Gods"

7 Podcast Adaptations You Should Know About