In 1991, horror fans received one of the greatest gifts imaginable: the birth of Dell/Abyss. Thanks to Jeanne Cavelos, not only an award-winning editor but also a goddamn NASA scientist, we were introduced to hitherto novice authors such as Poppy Z. Brite, Lisa Tuttle, Brian Hodge, Nancy Holder, and—yes—Kathe Koja, just to name a few. The Abyss line branched from Bantam Doubleday Dell, a company that had previously dabbled in horror but hadn’t quite committed to the genre yet. Not until Cavelos joined the team and changed everything.

Consider the year. We’re talking about the end of the infamous ’80s horror boom. Nobody in this new decade seemed to give a shit about the dark and macabre. The days of Dell’s horror titles selling over 100,000 copies each had expired. Now that the ’90s had arrived, they considered themselves blessed if a title surpassed 30,000 sales. The editor-in-chief summoned Cavelos to her office and basically threatened Dell’s discontinuation of publishing horror unless she could magically change everybody’s mind about the genre.

I don't like to lay down edicts about horror, since the great strength of the genre is how much freedom it provides. Horror doesn't dictate a plot, as mysteries and romances do; it doesn't dictate a setting, as Westerns and, to some degree, science fiction and fantasy do. To be a part of the horror genre, all that's required is that the story evokes strong, dark emotions - anything from apprehension, fear, terror, horror, disgust, anger, despair, numbness, loss, morbid fascination, and disturbing thrills, to awe. But I believe that horror should provide ‘vision and revelation,’ as Steve Tem says, and it can do neither if it is predictable. Horror shouldn't be predictable. It should be the exact opposite of predictable. And it had become all too predictable. I knew that horror could do more, and that it should do more.

The covers were punk rock, in your face. Not afraid to be ugly. Not afraid to make you uncomfortable. All of this can also be said for the contents found inside. These paperbacks were the real deal. Horror through and through. Psychological nightmares. Migraines mainlined into the soul. Flip to the first page of one of them and you’d come across the following message:

You’re holding in your hands one of the first in a new line of books of dark fiction, called Abyss. Abyss is horror unlike anything you’ve ever read before. It’s not about haunted houses or evil children or ancient Indian burial grounds. We’ve all read those books, and we all know their plots by heart… Abyss is the new horror from the dark frontier. And in that place, where we come face-to-face with terror, what we find is ourselves…

These little horror novels took off like bottle rockets. If you were involved in the genre even in the slightest sometime in the early-to-mid ’90s, then you were familiar with Dell/Abyss. It also marked the first (and only?) time Stephen King blurbed an entire publication’s line of books:

Thank you for introducing me to the remarkable line of novels currently being issued under Dell's Abyss imprint. I have given a great many blurbs over the last twelve years or so, but this one marks two firsts: first unsolicited blurb (I called you) and the first time I have blurbed a whole line of books. In terms of quality, production, and plain old story-telling reliability (that's the bottom line, isn't it), Dell's new line is amazingly satisfying...a rare and wonderful bargain for readers. I hope to be looking into the Abyss for a long time to come.

The very first title released under the Dell/Abyss line happens to be one of the best horror novels I’ve ever read: Kathe Koja’s The Cipher. 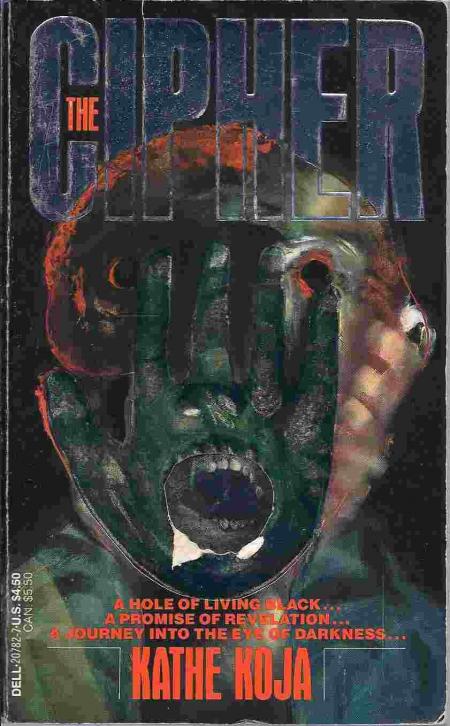 Kathe Koja, an author who Library Journal once described as a collaboration between Clive Barker and William S. Burroughs, possesses a writing style unmatched by anyone else in the business. The Cipher is her first novel, but it shines like the work of a true master. Never have I experienced something so visceral and ugly and beautiful all in one package. It is a piece of art that manages to simultaneously disgust and delight its audience.

Originally titled The Funhole (until its eventual publisher requested a change), Koja worked on the novel while taking care of her son, then only in preschool. Like most children of a similar age, he tended to wake far too early, significantly narrowing available writing time. Koja stated in a recent This is Horror interview that these time restraints helped shape her into a more disciplined writer. In those limited work periods, she learned the importance of engaging the story with her full attention. At her desk, which was more of a “converted sewing machine” than something more typical, she produced over 100 pages of the first draft before realizing the character of Nicholas wasn’t quite right. But once she reached “the funhole” in the narrative, everything clicked in place and the whole game changed. By the end of 1989, it was finally finished. A book that would go on to launch the Dell/Abyss line only two years later.

The book kicks off like a gunshot. A deafening warrior cry declaring, “To hell with exposition!” By the time you realize what you’ve gotten yourself into, it’s far too late to turn back. The wound’s already wide open and gushing blood.

Nakota, who saw it first: long spider legs drawn up beneath her ugly skirt, wise mouth pursed into nothing like a smile. [...] ‘You know it,’ she said, ‘the black-hole thing, right? In space? Big dark butthole,’ and she laughed, showing those tiny teeth, fox teeth, not white and not ivory yellow either like most people’s, almost bluish as if with some undreamed-of decay beneath them. Nakota would rot differently from other people; she would be the first to admit it.

We’re hit with a sentence structure that seems...off. You can’t trust it, can’t look away even for a second. Proper grammar and punctuation rules are gleefully stuffed down the garbage disposal. This is a book meant to scramble your brain. Read just the way you process thoughts. Trying to catch up with the flow of Kathe’s sentences is like hopping into Jeff Goldblum’s teleportation pod and saying, “Let ’er rip!” There’s no telling what kind of person’s coming out on the other end.

Nicholas, our narrator, is a down-on-his-luck video store clerk. Sometimes, once he’s reached a certain level of drunkenness, he fancies himself a poet. Nakota’s his only friend—and sometimes lover—who still smokes (“without defiance or a guilty flourish, smoked like she breathed but not as often”), still curses like it’s an art form, still pays him any attention. Except, the only reason she seems to still come over is starting to look like it has less to do with him and more to do with the strange black hole they discovered in an abandoned storage room located in Nicholas’s apartment building. An anomaly in reality they’ve dubbed “the Funhole.”

Black. Not darkness, not the absence of light but living black. Maybe a foot in diameter, maybe a little more. Pure black and the sense of pulsation, especially when you looked at it too closely, the sense of something not living but alive, not even something but some—process. Rabbithole, some strange motherfucking wonderland, you bet.

When the reader is thrown into The Cipher, Nicholas and Nakota are already full-on obsessed with the Funhole. Koja’s thankfully skipped past the scenes that might’ve slowed down the narrative. Absent is Nicholas and Nakota meeting for the first time, being intimate, eventually discovering what’s hiding in the storage room. We never know them pre-Funhole. Their futures are doomed from the getgo.

Koja once described The Cipher as “the story of two people who don’t belong together investigating what should not exist.” Nothing in this novel should be the way it is. Its purpose is to upset you in every possible (and impossible) sense. Nicholas and Nakota’s relationship exceeds the definition of “toxic.” They are two poisons clashing together. Mouthwash swishing back and forth over a corpse’s tongue. The collaborative schemes of these two damaged souls will be the destruction of not just themselves but many, many others. Imagine two tornadoes merging from opposite ends of a town.

Sometimes, I thought, it would be worth it to die, just to stop hearing that voice. Like an ache in the ear, like a bad tooth audibly rotting. Like a cancer that talks.

As much as I loathe the phrase, Kathe Koja’s The Cipher is absolutely a you’ll-either-love-it-or-hate-it kind of book. However, even those in the latter category will find themselves hypnotized by its spell days after finishing it. Its effectiveness cannot be denied. In Koja’s introduction to the rereleased electronic edition, she mentions one reader writing her a letter claiming it had made him “illogically afraid of his kitchen cabinets.” Maybe if I’d never read the novel, I would be able to laugh at such a statement. But after reaching the other side, the fear sort of makes sense. Most fear, after all, is illogical in nature.

Reading The Cipher was like going through surgery. I do not exaggerate when I claim certain sections inflicted both a physical and mental sickness. A combination of cosmic ideas, unnatural sentence structure, and uncompromising characters hit me exactly the right away. Often I found myself drifting off to sleep while reading, which isn’t to say the prose is boring. There is just a certain surreal spell to it that casts you off in a whole ’nother world. A world full of intense, frightening nightmares. I lost track of the amount of times I awoke gasping for breath, convinced I was still knee-deep in whatever madness The Cipher had injected into my dreams. This novel possesses a sort of magic. The further Nicholas and Nakota become obsessed with the Funhole, the further the reader becomes obsessed with Nicholas and Nakota.

I was becoming a process.

All bodies are, in some sense; engines driven by the health or disease of their owners, jackets of flesh that are the physical sum of their wearers. But to become your disease? To become the consumption itself?