More than two months ago, Game of Thrones finished its 8-year run on HBO. It ended not with a bang but a whimper, according to almost anyone you’d care to ask: the hardcore Thronies on Reddit, the highbrow critics at the Los Angeles Review of Books, the disgruntled petitioners storming Change.Org demanding a rewrite of the final season. Even Conleth Hill — better known as Varys — joined the disparaging fray: he was less than pleased about getting Dracarysed to death.

It seems like the postmortem is still in process. Nikolaj Coster-Waldau — aka Jaime Lannister — braved boos at Comic-Con when he expressed approval for the eleventh-hour swerving of his character arc. Meanwhile, showrunners David Benioff and D.B. Weiss ditched the festivities altogether. And that petition for a season 8 do-over picked up so much steam, HBO execs had to spell out that it wasn’t going to happen.

It’s hard to think of a TV finale that squandered more of the public’s goodwill — viewers were so savage in their assessments, you can’t help but think of Drogon’s “scorched earth” flight over KIng’s Landing. But luckily for us bookworms, we’ve got something to look forward to: George R.R. Martin still has two more volumes to give Daenerys, Jaime, and the gang the send-off they deserve.

Granted, it’s been a while since we heard from Martin. Book 5, A Dance with Dragons, came out the same year as the show’s first season, and we’ve had 8 years of silence since. It’s becoming hard not to worry that the two promised sequels won’t actually materialize — or that GRRM will fumble the ending as spectacularly as his adapters.

Still, the so-called American Tolkien has a strong track record. A Game of Thrones was born 23 years ago today, and its impact on fantasy rivals Lord of the Rings. Here are four reasons the books will forever be better than the show.

The show was hampered by TV’s limitations as a medium

A Game of Thrones was born 23 years ago today, and its impact on fantasy rivals Lord of the Rings.

GRRM originally envisioned the books as anti-television. As a screenwriter tasked with churning out pilots, he felt limited by budgetary and time constraints. So he dreamed of crafting an epic, sprawling, positively decadent story, with a big cast and bigger battles — something you could never fit on-screen. Martin took inspiration from LOTR on the one hand, the War of the Roses on the other, and an unfilmable-on-purpose epic fantasy was born.

That writing process started in 1991, when fantasy SFX looked very different— Peter Jackson’s live-action Fellowship of the Ring wouldn’t even come out for another ten years. But even after two decades’ worth of new CGI tech, GRRM’s reservations about TV have proved prophetic. From cheap-looking wigs to a poorly lit Battle of Winterfell, the show’s visuals were far more liable to miss the mark than a reader’s imagination.

The books would never be artificially limited by, for instance, the expense and hassle of bringing direwolves to life: a written version of “The Long Night,” the episode that pitted the defenders of Winterfell against the Night King’s forces, could easily sic Nymeria’s whole pack on the army of the dead. And let’s not even talk about that Starbucks cup on the banquet table — a mistake several times more cringeworthy than the most egregious typo.

Here’s something else the written word still does better than the shiniest high-def film: the good, old-fashioned interior monologue. Reading ASOIAF gives you direct access to the characters’ rich inner worlds: there’s no need for shoehorned dialogue or “meaningful” closeups. After all, there’s only so much even Emilia Clarke’s ultra-expressive eyebrows can manage to get across — no matter how valiantly she quirks them at the camera.

Something else gets lost in translation going from book to show: ASOIAF’s distinctive use of POV. If there’s one thing GRRM does especially well, it’s telling a complicated story through multiple viewpoint characters — making it richer and more digestible all at once.

The books let readers spend quality time with Sansa and Arya, Tyrion and Jon. We end up experiencing Westeros (or Braavos, or Mereen) through a kaleidoscope of vantage points, each colored by its own emotional baggage and mental quirks. The resulting experience is so immersive it leaves conventional TV-viewing far behind: it’s more like VR.

The show takes the books’ complex, morally gray characters— and makes them black and white

Unable to exploit the almighty interior monologue, GOT often serves up characterization that’s a little short on nuance. It’s especially jarring if you’re a Thronie watching out of love for the books, since that’s one of their selling points. You might take issue with GRRM’s laborious plotting, but his fine-grained rendering of psychology and personality are always on point.

Of course TV characters can be rendered with subtlety and distinction: just look at Stranger Things, or Breaking Bad. But the more bloated your cast is, the more you’re going to have to cut corners when you’re bringing everybody to life.

GOT already trimmed down ASOIAF’s roster by quite a bit, an act of economizing you may or may not have appreciated. We never got to see the on-screen versions of, say, Arianne Martell or Lady Stoneheart — if Catelyn Stark’s undead alter ego counts as a separate character. Still, these cuts didn’t do enough to ensure the remaining core cast got their developmental due.

The TV version of Stannis Baratheon, for instance, became far more self-serving and fanatical in his translation from the book. It’s particularly jarring because those around him — from loyal Onion Knight Davos Seaworth to worthy opponent Mance Rayder, the King-Beyond-the-Wall — consistently reference his strong sense of justice. We might see signs of this in the book, but it’s hardly evident on the show: this continual trumpeting of Stannis as a just lord becomes a case of Informed Attribute, an annoying violation of Show, Don’t Tell.

Wily Tyrion Lannister, meanwhile, gets the opposite treatment: his moral blemishes are removed as if with Photoshop, to the detriment of an iconic literary character. While still a technical anti-hero, show Tyrion falls on the shinier side of the trope. His book counterpart, however, boasted a considerably more complicated moral makeup that made it fascinating to live inside his head.

Part of ASOIAF’s richness lay in its ethical complexity — its characters represented an intricate palette of moral grays. But the show turned up the contrast and redrew them in black and white, unforgivably giving some characters the hero treatment and others the villain edit. 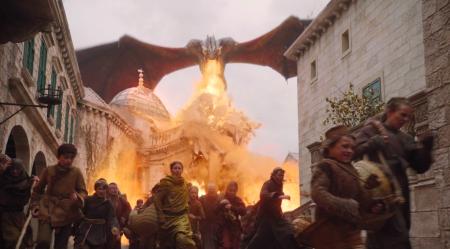 Pretty much all of the previous problems are part of one, big mega-problem: GOT often does its characters dirty. Flattened down and emptied out of interiority, they become mere plot devices, puppeted around by the showrunners from plot twist to plot twist.

Exhibit A: The show’s gratuitous rape scenes. GOT’s over-reliance on rape has drawn ire since its debut season. In adapting the books, GOT went out of its way to turn some unambiguously consensual sex scenes into scenes of rape. It also interpolated more sexual violence narrative arcs where they never existed in the book.

The trade-off of this so-called “shock value” is that the show often creates a harrowing, alienating viewing experience, with thin thematic purpose and often sloppy post facto justifications: think of Sansa’s declaration that the abuse she suffered was needed to help her mature beyond being a “little bird.”

It’s all part and parcel of the showrunners’ tendency to lean on cheap narrative tricks. Just take Dany’s last-minute Face-Heel Turn, arguably the most polarizing moment in the show’s utra-polarizing swansong season. No one can agree what she was actually doing by massacring innocents in a city that had already laid down its arms. In fact, the rampant confusion produced a short-lived cottage industry of searingly hot takes. Was it strategic, a calculated effort to bring the rest of Westeros to heel as efficiently as possible? Was it a Mad Queen moment, courtesy of the Targaryen fire in her blood? Did an evil Bran warg into Drogon to set up his own rise to power?

There’s one thing we can all agree on— Khaleesi’s character arc threw us all a sharp curveball. A creative work doesn’t have to be as easy to parse as a second-grade math problem: the best art can and does contain multitudes. But that’s not what happened in “The Bells," which wasn’t so much interpretively open as totally opaque. You can’t imagine the books being so sloppy with character development — even if they do end up sending Dany on a fiery rampage.

If you're not tired of discussing it, what is your take? Will GRRM's finale (should we get it) do the series the justice television did not?

Stop Trying To Make Me Read Game of Thrones (And Yes, I Know That's Not What They're Called)

Hello, Games of Thrones is my favorite television series and I love to gather information online on this series. Thanks to you for sharing this with us. I didn't know this before until I found your post while searching for the best online pokies australia real money. I would love to hear more from you on Games on Thrones. Keep sharing useful information with us.

This is a very exciting article and I was interested to read about it. I love reading articles like this, for example, I often read reviews of the best casinos. new reviews came out recently and it was incredibly educational even for an experienced player like me.