Ghostly Doppelgangers, Bell-Ringing Goblins, and More Cranky Old Rich Jerks: Get in the Holiday Spirit With Some Lesser Known Dickens 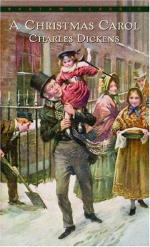 Everyone knows "A Christmas Carol"

It's one of my all-time favorite stories! I’ve read the original a hundred times, and I’ll watch any version of it, no matter how ridiculous and no matter who plays the irascible Scrooge: George C. Scott, Kelsey Grammer, Patrick Stewart, Cicely Tyson, Bill Murray, Vanessa Williams, Jim Carey, or the Muppets! Every time I read the original, I find new things to love about the story. It has that perfect blend of the pure and macabre, of redemption and peril, of comedy and tragedy that makes any Christmas story timeless and heart wrenchingly delicious. Dickens was a master at that, and A Christmas Carol was one of his master works.

But…did you know he wrote many other Christmas stories? Something about that holiday must have called to old Chuck because he wrote A Christmas Carol in 1843, and between then and 1867 he barely missed a season without writing some story or essay on the topic. Officially, there are five Christmas books, the first being the timeless A Christmas Carol. Unlike most of Dickens’ books, these were not published serially but released as full novellas near the beginning of the Christmas season. After these books, he continued to publish Christmas stories and essays each year in his literary journals Household Words and All the Year Round. Eight Christmas editions of Household Words were published between 1851 and 1858, and nine Christmas editions of All the year Round were published between 1859 and 1867.

Like A Christmas Carol, all of Dickens’ holiday tales are kind of dark. Just check out these titles! The Haunted Man and the Ghost’s Bargain, The Perils of Certain English Prisoners, The Chimes: A Goblin Story; sounds a little far from the holiday cheer pumped out at us from every store speaker and absurdly decorated house, doesn’t it?

If you love Christmas, but hate the blow up snowmen barely staying inflated on your neighbor’s lawn, this year’s pop star coming out with yet another rendition of Jingle Bells, or the sudden reappearance of peppermint bark at every café you frequent, then regain some of your holiday equilibrium with these lesser known tales of woe and wonder by the King of the Christmas Story, Charles Dickens. Here is a synopsis of the other four Christmas books. 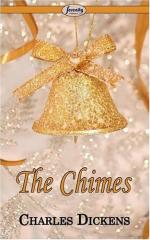 Written in 1844, a year after A Christmas Carol, The Chimes: A Goblin Story of Some Bells that Rang an Old Year Out and a New Year In is Dickens’ dedication to the poor. According to Dickens' first and most reputable biographer, John Forster, Dickens meant “to try and convert Society, as he had converted Scrooge.” The huge popularity of A Christmas Carol propelled Dickens to continue on the theme of redemption for the oppressed, and in this case, the depressed.

This is technically a New Year’s tale as it take place on New Year’s eve. The main character of The Chimes is Trotty, the aptly named “ticket porter,” or messenger. Trotty is a sensitive soul, and after reading about an impoverished young woman who was convicted of killing her baby after she jumped into a river with it, he becomes convinced that poor people lack the motivation and moral fortitude to come up in the world.

Trotty’s depressing hypothesis seems confirmed by a series of encounters with people who make him feel shittier and shittier. The jerkoff judge Alderman Cute, economist Mr. Filer, and pompous philanthropist Sir Joseph Bowley each imbue Trotty with the sense that poor people, like himself, are ungrateful for the charity they receive and incapable of betterment. This crappy outlook also convinces Trotty’s daughter, Meg, that her anticipated marriage to her long-time beau, Richard, is ill-advised: She, too, falls into a funk.

While at Alderman Cute’s house, he learns that the judge plans to imprison a man named Will Fern who has been falsely accused of being a deadbeat. On his way home, Trotty happens to run into Mr. Fern and his niece, Lillian, who are on their way to clear his name with the judge. Trotty warns them of the judge’s intentions, so Fern and his niece accompany Trotty home instead. There, the now wretched fivesome share a small meal.

As night falls, Trotty hears the chimes of the church. Drawn to them, he climbs the tower only to meet the bell-ringing goblins who dwell there. They inform Trotty that he is actually dead now, having fallen from the tower. They also berate him for his crappy attitude toward humanity and their ability to improve themselves. To prove to Trotty how his negativity has affected his loved ones, they show him a series of visions of what will happen to them now that he’s died: Will Fern spends his life in and out of prison; Lillian becomes a prostitute; Richard impregnates Meg then drinks himself to death; and Meg, in desperation, attempts to drown herself and her baby.

At the last moment, however, Trotty—present at the scene as an apparition—cries that he has changed and he reaches out to stop her and succeeds. Like Scrooge, Trotty awakes on New Year’s day a changed man. The visions were some horrible dream, and he can now enact positive change on himself and the lives of his loved ones.

And somewhere, an angel gets its wings…Ok, I made that last part up, but the plot of this one reminds me of It’s a Wonderful Life. 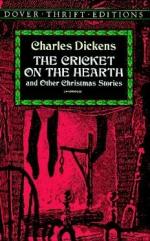 "The Cricket on the Hearth"

Published in 1845, The Cricket on the Hearth. A Fairy Tale of Home steers clear of the deeper social issues that marked Dickens’ other Christmas books. Opting for a more simple story of home and family, Hearth follows the Peerybingle family—John, Dot and their baby—who have a sort of fairy-god-cricket who hangs out on the fireplace and looks out for the family.

Enter also the Plummer family. Caleb Plummer is a toymaker employed by—you guessed it—a rich, old, slightly evil man named Mr. Tackleton. Caleb has two children: blind Bertha and Edward, who went missing in South America and is presumed dead at the time of this story. The lecherous old Tackleton prays on Edward’s fiancé May, and intends to marry the poor girl.

Oh, and this: there is some mysterious guy staying at the Peerybingle’s house.

Tackleton is apparently not satisfied with just ruining May’s life, so he tells John Peerybingle that his wife is actually having an affair with the mystery man staying at their house and shows Dot hugging the guy. John decides to divorce her…but wait! The mysterious guest is actually—that’s right—the missing Edward who has returned home in disguise.

John realizes Dot had been faithful, Edward marries May, and Tackleton has a classic Dickens change of heart, and endorses the marriage of the two lovers. Awww…. 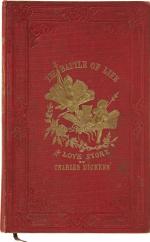 "The Battle of Life"

The Battle of Life: A Love Story, published in 1846, might be the least loved of the Dickens Christmas books. It’s another story of love and transformation, but it lacks the social commentary which added depth to his other works.

The story takes place in a small English village at the home of the Jeddlers. Marion Jeddler, one of two daughters of widower Dr. Jeddler, is engaged to Albert Heathfield, who is about to leave the village to finish up his career studies. The couple plan to wed when he gets back.

Enter the dashing Michael Warden, a ne’er-do-well who seemingly seduces Marion and then runs off with her the night before Albert returns. The affair scandalizes the Jeddler family. After a while, though, Albert marries Marion’s older sister Grace and they have a daughter they name Marion.

Six years later, on what would be Marion’s birthday, Grace tells Albert that Marion has promised to come home and explain in person why she eloped. When Marion does, indeed, return home, it is revealed that she never ran off with Michael Warden. Instead, she’s been living at an Aunt’s house where she’s been hiding out so that Albert would fall in love with Grace instead of her. Dr. Jeddler, who has hitherto been cynical about love, is converted by his daughters’ sacrifices for each others’ happiness. *Sniff* 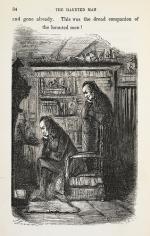 "The Haunted Man and the Ghost’s Bargain"

Dickens returns to his dark side with The Haunted Man and the Ghost’s Bargain, A Fancy for Christmas –Time, published in 1848.  Professor Redlaw, a chemistry teacher, is a grumpy old guy who can’t seem to forget all the wrongs done to him by people in his past. Then, one night, he is visited by a spirit—an evil twin version of himself—who promises to get rid of the terrible memories. The catch is, however, that Redlaw now has something of a Midas touch—everyone he encounters will also lose their memories--good or bad.

Far from feeling relief, Redlaw now has some sort of uncontrollable rage that spreads to everyone is his life. His curse even affects poor old Mr. Swidger, whose happiness is based on pleasant memories of days gone by. Without them, he becomes senile.

The wide swath of Redlaw’s rage, however, does not affect the pure Milly Swidger, who uses the memory of her deceased baby to inspire her to be good and to forgive people. The curse is reversed when Milly presents the moral of the story--forgive and forget--and everyone, even Redlaw, learns to be forgiving, especially at Christmas. 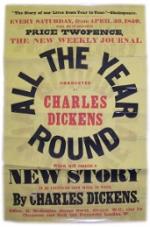 Mr. Dickens has been dead long enough that practically everything he has ever written is available for free online. Project Gutenburg offers all five of the stories for free in a variety of formats—even Kindle—for online reading or download. If you prefer to listen to your book, librivox.org has many of these available as audio books that you can download and listen to on your phone, computer, tablet, or eyePhone (oh wait, those don’t exist yet…)

You can read the Christmas editions of Dickens’ journals Household Words and All the Year Round at Dickens Journals Online. And Penn State has a web page dedicated to all Dickens' works, as well.

An overdose of Dickens' good cheer is sure to imbue you with the holiday spirit and have you skipping like good, old Ebenezer Scrooge on Christmas morning. Enjoy.

Buying Guide: How To Shop For A Writer This Holiday Season