Since we've recently seen two of the best superheroine portrayals ever captured on film thanks to Joss Whedon and Scarlett Johansson in The Avengers, and Christopher Nolan and Anne Hathaway in The Dark Knight Rises, it’s worth looking at what made them work when so many others have failed (and the list of failures is so very long – Catwoman and Elektra, I’m looking at you especially hard). Although I’ll admit to having a soft spot for Michelle Pfeiffer’s Catwoman from 1992’s Batman Returns, and I’ve enjoyed a lot of ensemble heroines over the years like Anna Paquin’s Rogue, and even Selma Blair’s Liz Sherman, I can’t think of any portrayals that get it as a right in as many ways as Nolan’s Catwoman and Whedon’s Black Widow.

So what did Nolan and Whedon (and their actresses) get right that so many superhero films get wrong? For starters, their heroines are actually recognizable as the characters from the comics.

If Jean-Christophe “Pitof” Comar’s Catwoman wasn’t actually called Catwoman, nobody that has ever read comics would be able to tell if the film was about the same character that has graced the printed page for over 70 years. From name changes (who the hell is Patience Phillips?!?) to history, personality, and even fashion sense, there’s almost nothing in Pitof’s film or Halle Berry’s portrayal that actually says Catwoman, or quite literally, Selina Kyle. There are certainly far more problems with the Catwoman film than the fact that the character has no resemblance to the DC heroine, but it’s certainly the heart of the problem.

Similarly, poor Jennifer Garner was horribly miscast for a terrible version of Elektra, directed by Rob Bowman. Before we even begin, any comic fan must acknowledge than no movie starring Elektra should be rated PG-13. The character is far too dark, violent, and labyrinthine for kids, and slapping a PG-13 rating on such a character immediately tells audiences you don't know what you're doing and/or you have deliberately walked away from much of the nuance and complexity that makes the character great. Additionally, though Jennifer Garner showed some nice range as Sydney Bristow on J.J. Abrams Alias, as Elektra she looks (and acts) more like the cute white girl next door rather than a deadly Greek assassin.  While the plotting of the Elektra film draws loosely (and I stress the loosely) from Frank Miller’s Elektra stories, when it came to character, it’s like they didn’t even try. The superheroine (or anti-hero is perhaps more accurate) on screen bears literally no resemblance in form or in deed to the Elektra of the comics.

So what did Nolan and Whedon do differently? Deliberately or not (it may come as a shock that I have no insider knowledge into their respective creator processes!) they drew from and were respectful of what comics had done with these heroines in their nearly 120 years of combined comics history.

Though Anne Hathaway’s long hair and costume were departures from the critically acclaimed Ed Brubaker and Darwyn Cooke Catwoman Vol. 3 series that began in 2002, the core of Selina Kyle in The Dark Knight Rises is clearly inspired by that version of the character. Smart and cool, moral by her own personal standards, and with an incredibly complicated but compelling relationship to both Bruce Wayne and Batman, Nolan's Selina is spot on to the Selina in the comics.  Hathaway's portrayal is joyful and vibrant, but intricate and always more than either hero or villain, which is the essence of the best versions of Selina, who remains to this day one of the best and most complex superheroines (or again, anti-heroes) comics have to offer.

Check out this great page from Brubaker and Cooke’s Catwoman run: 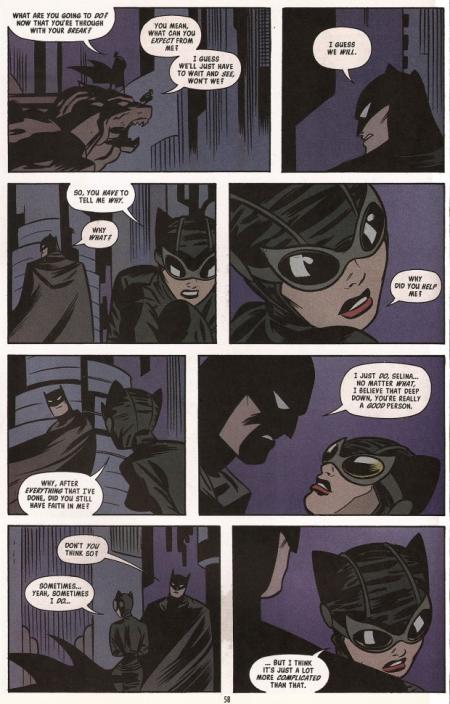 While I wish Nolan had opted to stay more true to Brubaker and Cooke’s Catwoman costume – especially when it came to the mask versus goggles – when it came to the important things they got everything right.  From the little details like her gadgets (less hi-tech than Bruce but always saavy and fun), to the bold fashion sense and unbridled beauty that's just the right mix of sophisticated and sexy, this Selina is pure comics Catwoman, updated only in ways necessary for a new medium. In fact, the only thing wrong with Nolan’s Catwoman is that she doesn’t get enough screen time. And in fairness, where Catwoman was a movie solely about Catwoman (obviously), we all know The Dark Knight Rises is about Batman, with a massive ensemble cast fighting for his spoils. Though Nolan is unlikely to make a stand alone Catwoman film since he’s moved on from the Batman franchise, if someone could capture what he did, a new Catwoman movie starring Hathaway could go a long way toward undoing the damage of the first Catwoman movie.

Whedon and Johansson’s Black Widow is a less direct inspiration of the comics, in part because so many of Natasha’s stories are spy heavy and The Avengers required a more traditional superhero take. But there’s no doubt that the unflappably cool Natasha they present is imbued with many of the best portrayals of the character from over the years. Whedon’s take, though necessarily more superhero-esque, reminds me of recent portrayals such as Marjorie Liu’s interpretation in The Name Of The Rose, Ed Brubaker’s version in the current Winter Soldier, and even Warren Ellis’ take in last year’s Secret Avengers arc. These are all modern updates on Natasha that still maintain the spirit of the original character. While it is impossible for these books to have inspired Whedon’s version of Natasha (since he wrote The Avengers in 2010 and the oldest of these books was released in 2010), the film portrayal and these portrayals all find that essential core that makes Natasha the ultimate badass.

In fact, the opening scene with Black Widow in The Avengers reminds me just a little bit of this early scene in Marjorie Liu’s The Name of The Rose, where even captured and being interrogated, Natasha never loses her cool: 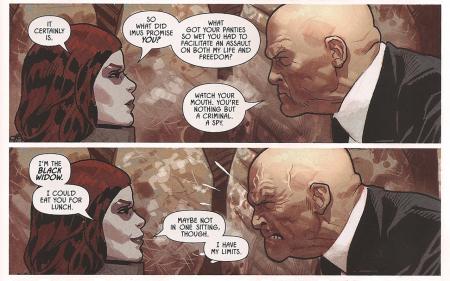 It also doesn't hurt that both film costumes use the most practical and realistic versions of their comic book counterparts. Both actresses wear modern black body suits that look more military than superhero, which fits their personalities and roles as superheroes/spys/theives/etc. Neither character would be caught dead in Elektra's red midriff baring bustier, or Patience's black leather cut-out push-up bra, which speaks volumes about how these films got the small stuff (that can easily become the big stuff) right. Though Selina's heels in The Dark Knight Rises are not a favorite of mine (I prefer her Darwyn Cooke combat boots), at least they proved to have a function and thus a reason for existing, which is more than I can say for shredded leather pants or lace-up bustiers.

Like Selina Kyle, Natalia "Natasha" Romanov is a character with many layers and a far less obvious "hero" trajectory than many superheroes. The results, however, are elaborate and detailed characters whose many corners have been explored in detail over the years. Not all of those explorations have been successful, or of a high-quality, but the characters have remained vibrant and important. And Whedon, Johansson, Nolan, and Hathaway's versions have only added more depth and richness to the character tapestry.  When a two-hour film can add so much to characters with 40+ or 70+ years of stories already to their name, you know they've gotten something very right, and more importantly have become the benchmark for getting a superheroine right on film.

Who knows where we can go from here?

ome venues have to pacify the neighbours by setting a limit level of music. Also, check with the venue that there is easy admission to the performance area and that heavy loading tackle can be brought into the location from a nearby parking area as close to the venue as likely.

When I read, "...poor Jennifer Garner was horribly miscast for a terrible version of Elektra, directed by Rob Bowman. Before we even begin, any comic fan must acknowledge than no movie starring Elektra should be rated PG-13. The character is far too dark, violent, and labyrinthine for kids, and slapping a PG-13 rating on such a character immediately tells audiences you don't know what you're doing and/or you have deliberately walked away from much of the nuance and complexity that makes the character great." I wondered if you realized that the Catwoman you're praising is in a PG-13 movie, and that The Dark Knight was PG-13 as well.

The rating of the movie is arbitrary anyway, MPAA is a mad tea party. I'm sure the characterization was terrible but it was more likely due to marketing and wanting the character of Elektra to be more likeable/marketable, which obviously didnt work. At least no one tried to jam a giant mechanical spider in there.

I am a fan of most of your articles btw.

While Catwoman and Black Widow can easily be considered R-rated properties (and would work well in R-rated films) I don't consider them nearly as R-rated as Elektra (if you're doing her correctly). For starters she's an assassin, which is decidedly not PG-13, but she also has complex and disturbing family issues, a truly disturbing history of torture (and overcoming said torture), and a good deal of complex madness.

Nothing about that seems it can work in a PG-13 venue, and unlike what you can do to more traditional superheroes/anti-heroes like Catwoman and Black Widow (including put them in G-rated cartoons fairly successfully while still maintaining some of the flavor of who and what they are) works with a character like Elektra (in my opinion).