After ten and a half months, I finish the first draft of Good Sex, Great Prayers. It’s 517 pages and ~150,000 words—a goddamn brick. Looking at this thing elicits equal parts pride and anxiety. Pride, because I’ve finally knocked out “a big book.” I’ve always wanted to do that, and in this case, I was able to do it in under a year. Then the anxiety sets in when I realize what the next step in the process is: I have to comb through this monster and pick it apart. It’s almost time to edit. 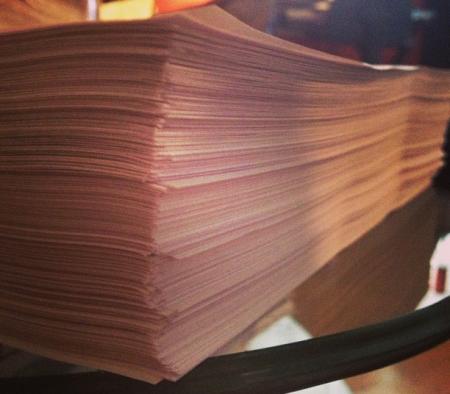 It’s not every day that I finish a novel, so when I do, I make a point in celebrating it. I hit the bars, the clubs. All the parties and group dinners I forfeited for the sake of writing, I now take advantage of. Some days I spend doing nothing but knocking out my DVR queue or reading things I didn't write. Believe it or not, this is an integral part of the editing process. It’s how I go from “writer mode” to a clean slate. I'm celebrating an accomplishment, yeah, but I'm also washing the novel away from my palette.

Ever notice how when you’re self-editing you’ll read a sentence how you thought you wrote it—not how it actually is? And then all those typos and missteps end up going to print? That’s what happens when you’re too close to the project. You become inert to recognizing error, whether it's grammatical or a gaping plot hole. Your mindset after completing a novel is completely different from the one you’ll have after a couple weeks of not thinking about the project.

Sometimes the best thing a writer can do is to forget what they wrote, take a mental vacation. That’s why shelving the project is such an important step: you can come back to it with fresh eyes and renewed drive to work.

While I’m enjoying my time away from writing, beta readers are chiming in with the first wave of official feedback. I’m a big believer in beta readers. They have the blank slate mentality that the author will never have and catch the shit that would normally go overlooked. That, and it’s about as close to “product testing” as an author can get.

For Good Sex, Great Prayers I have three: a friend, a literary-based radio show host, and my girlfriend. The goal, of course, is to get a firm idea of what the public is going to think before the book actually goes public. It's not unlike how restaurants do a soft release before the grand opening. There’s really nothing sadder than some Amazon reviewer catching all your flaws just because you were too eager to go to print, so I put a lot of weight on the beta reader portion of things.

My advice on working with beta readers is this: hammer it in their head that they can do no wrong, there are no bad questions, and ultimately, being hyper-opinionated is expected. If the beta reader takes your book for two weeks and hits you back with a simple “Yeah, it’s good,” then something’s wrong. No first draft is perfect. Ask King. Ask Danielewski. They’ll tell you. Show me a ready-to-print first draft and I’ll show you an author that’s rushing the process. Again, there’s absolutely nothing worse than having these problems unearthed by the masses after it’s already too late, so it’s best if you break that ground first. The novel, unfortunately, isn’t something you can do a product recall on once it’s out there. Make it clear to your betas that their opinion matters and the lines of communication are wide open.

My content editor for Good Sex, Great Prayers is Pela Via. I worked with her before when one of my stories was accepted into the Warmed and Bound anthology back in 2011. She’s also the head editor of another publication I currently work for called ManArchy Magazine. I’ve got enough of a history with her that there’s an established trust there, i.e. – when she makes a suggestion, I listen. I can be a hardheaded son of a bitch when it comes to my writing, but I’ll listen to Pela. For me, that’s the key to the author/editor relationship: finding someone the author will actually take advice from. If you can’t take advice—guess what?—this isn’t going to work. If you believe you're beyond correction, you might as well not have an editor.

The first part of the content edit with Pela is a phone conversation in which she tells me my greatest strengths and greatest weaknesses.

Weaknesses: Transitive verbs. I repeat/over-explain things. I show and tell; whereas most writers are either doing one or the other, I’m doing both in some places. It can all be fixed with the appropriate cuts, she tells me.

Strengths: I successfully handled the mainstream style while retaining my edge. It’s original. There’s great potential for it to do well with a wide audience. Overall, she tells me, this is a very good book.

Then Pela covers all the major components of the novel: plot, characters, style, voice, etc. It’s similar to the feedback that you’d get from a beta reader, but a beta reader that offers solid suggestions along with the reactions. The phone conversation is the informal part of the process though. It’s us talking about the broad strokes of the novel.

Pela sends a followup email a few days later. It is the fine tooth comb: a copy of my manuscript that contains close to 600 notes/corrections/reactions in the margins. They’re candid…maybe even a little harsh. I told her to be that way. “Don’t bullshit me. Don’t spare my feelings,” I said. “Better it come from you than someone else.” That’s one of the main differences between a debut and sophomore release: you can anticipate public reaction before it happens, and therefore, attempt to bend it to your favor. The best way to do that is to beat up the novel as much as possible before the world can. "Kill your darlings," as King would say. 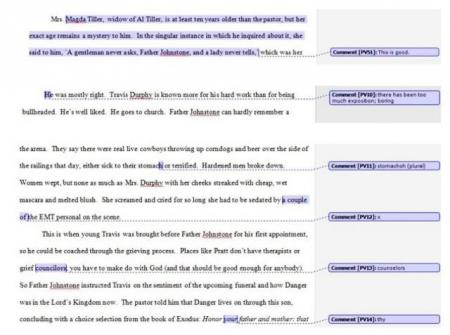 Beta readers: They serve as a baseline for reaction and can point out the potential issues you're not seeing. This is your "soft open" so to speak, and I highly recommend any author with a newly-done manuscript taking advantage of this. You'll be amazed at what a non-industry professional will find.

Content editor: The first official critical eye. Cast your feelings and ego aside and let them beat up that manuscript. If you don't let them gut this thing, the world will do it for you. Take your bumps and bruises before the release—not after. And always remember that if your content editor gives you a suggestion, there's probably a good reason for it.

Line edit: I have a line editor for this book, but the sad truth is that line editors rarely catch everything. It's in the author's best interest to do at least a couple passes before handing the manuscript over. Here are a few tips:

-print out a hardcopy of the manuscript in at least 14 point font, double-spaced (or more), with large margins.

-look up any words you're not sure about and be extra mindful of homophones and heterographs (ex: there, their, they're).

-catch overused words and filler words. Some popular ones would be: "rather," "quite," "just," and "actually." Run a CNTL + F on those later and cut them down.

I've had a few things happen since the last installment of this series.

-My story "Ultimate Grand Supreme Super Sexy Baby" is now available for preorder as part of Spark: A Creative Anthology (vol. II) which you can check out HERE.

-Another story, entitled "Dietary", has been selected for the Chuck Palahniuk anthology Burnt Tongues, which will be published through Medallion Press next summer. Read more about that on Chuck's official site HERE.

-I did a radio interview with Books and Booze last month in which I talk a little bit about Good Sex, Great Prayers and the third edition re-release of Out of Touch. You can check out that episode by going HERE. I'll also be doing a reading with these guys out in St. Louis on June, 22nd. For full event details go HERE.

-I finally got my website built. Take a minute to poke around by going HERE.

As always, feel free to fire off in the comments section. If you have any questions about the editing process, I'd be happy to field them.

Brandon Tietz is the author of Out of Touch and Good Sex, Great Prayers. His short stories have been widely published, appearing in Warmed and Bound, Amsterdamned If You Do, Spark (vol. II), and Burnt Tongues, the Chuck Palahniuk anthology. Visit him at www.brandontietz.com
Follow @brandontietz

Want your writing to pack punch? Want every word to leave readers gasping for more? Whatever your genre, John Skipp will show you the moves in this intensive four-week training session.