The ink is wild and the word-smithing never stops. Indie authors have to work twice as hard to be heard half as much as the big-name mainstreamers. It comes with the territory.

Richard Smyth is a rare talent in the current writing world. He genre hops from fiction to nature writing and has crossword puzzles published as well. His short stories bring a classic feel to modernity and have been known to win a few awards. But despite his growing list of achievements, it still annoys the hell out of me that more people know who E.L. James is.

Okay, maybe that’s an outdated reference (thank the GODS!), but I first stumbled upon Smyth’s writing years back when I was blindly searching indie publishers and devouring free kindle books. His novel, Wild Ink, was a free read and it sucked me right in. It isn’t your usual “man finding himself” tale. It follows an elderly character stuck in a nursing home, and details the insanity of trying to rediscover youth in a frail body.

There is nothing like it. It challenges the typical stories about adulthood and has a lot to say about life and death. Maybe that’s why when I first read it, I thought the author had to be a seasoned old fart. (I was shocked when I discovered he wasn't much older than myself.) 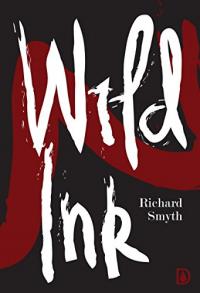 I loved it so much, I had to have a copy. It was unavailable in print in the U.S., being a British book, but I was lucky enough to obtain a copy directly from the author after being slightly annoying. It was worth it. My copy held so much to earmark and underline.

There was a familiar theme about accepting death that I often liken to the bittersweet beauty of Charlotte’s Web. Though not for children, Smyth’s writing made me feel like a new reader and I became an avid fan. His short stories always deliver. When I realized that he also wrote nonfiction of the nature variety, I grew even more appreciative of his style, being that my favorite works are true stories like the Born Free series and conservationist magazine articles.

It is a rare creative mind that can easily slip from fiction to nonfiction with such ease. I attempt and fail all the time. But where I falter, Smyth’s work shines.

It’s good to look up to those who outperform you. No one should be looking down when wishing to achieve anything. Richard Smyth’s newest releases have been nature books about birds. In fiction many of us see birds as symbols of hope, freedom, and messengers of God(s)/the universe. They are a constant theme which many great works would be incomplete without.

In his nonfiction, Smyth takes a similar yet contrasting approach. He is a bird watcher and admirer, yet his wit and sense of humor lead him to good-naturedly mock humanity’s mystical ideals of birds, and present us with more tangible references that somehow still give them an awe-inspiring connection to our lives.

British writers seem to have a better handle on balancing their political stances with the needs of the reader, to reach a wider audience than the current American brand of pushiness. I respect that.

It is much easier for me to consider the author’s standpoint when the information is simply put in terms that don’t point fingers or scream and yell. Smyth has been known to be a bit of an activist, but on the most civil terms. It’s what makes his work universal. He keeps writing and presenting facts and ideas and getting through to readers who may or may not otherwise agree with the content. That is to be truly applauded.

Richard Smyth is humble and good to his readers. That’s always important to me. He is accessible on Twitter. His website is easy to navigate. His articles for The Guardian soften news reports with nature stories that remind us of our greater connection to all the creatures on earth.

I can’t think of a more deserving author to honor for this month’s literary birthday article.

Indie authors take more risks. They have a rockier time in the industry, but their work often reflects a much more diverse perspective of literature. Indie books are where the new stuff is. The REAL new stuff. Not the rehashes and reboots that make a buck off of playing it safe.

Smyth’s work doesn’t play it safe. It breathes on its own. It will last because of that, and I hope he sees many successes for the rest of his birthdays.

Ask The Lit Coach: "What Is The Ideal Length For A Nonfiction Book Proposal?" and More