Holiday Gifts I Would Give To Famous Authors

Close your eyes and imagine a holiday the way you've always wanted it.

Only problem, when you close your eyes, you have to think about the gifts you're going to give your new besties. The good news for you is I've made a list. I've checked it twice. And whether the folks on it are naughty or nice is none of my concern. Like I said, boozy coffee. I'm feeling no pain.

And by the way, if you're on this list, consider yourself formally invited to Christmas with me. Unless you're dead. In that case, let's talk closer to Halloween.

I’m the only person on the planet who enjoys the outrage Martin creates whenever he’s not sitting at his desk more than I enjoy the actual product of him sitting at his desk. What’s that saying? Some people like to watch the world burn? This is true. And some people might also want to shower the planet in highly flammable confetti. 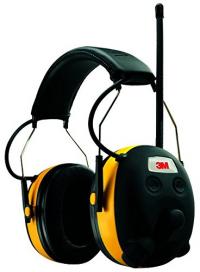 I read this interview with Palahniuk where he said he would do yard work wearing these 3M jobbers to block out the sound. I can tell you from experience, someone in his life hates these. I used to fly with ear protection worn over earbuds. I did this for years until my partner finally bought me fancy noise-canceling headphones. Partially for me, partially for her so she didn’t have to walk through the airport with me when I looked like someone who just got off work demolishing buildings. Like some sort of Demolition Man.

Simply a 3X5 card with the following information on it: You can buy raccoon penis bones, by the dozen, on Amazon.

I think this is probably misinterpreted often to mean exactly what it says.

Somebody asked me: 'What do you do? How do you write, create?' You don't, I told them. You don't try. That's very important: not to try, either for Cadillacs, creation or immortality. You wait, and if nothing happens, you wait some more. It's like a bug high on the wall. You wait for it to come to you. When it gets close enough you reach out, slap out and kill it. Or if you like its looks, you make a pet out of it.

Not only is this a little truer to what he said, it would make a hell of a huge grave marker, like 50 feet long, which would be sweet.

Margaretatwood.com takes you to Atwood's Amazon page. If you want the author's actual site, you have to hit up Margaretatwood.ca. Atwood can keep her Canadian pride, but why not redirect Margaretatwood.com to her actual web site? And while I'm cruising around GoDaddy, I'll probably stuff a couple others for Atwood in the shopping cart. AtwoodIsMetal.com is like $12 dollars. 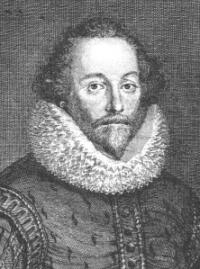 That way he could stop wearing that air filter around his neck all the time. You’re not fooling anyone, Bill. That’s not a fashion statement. It’s an air filter you dumpster-dived from behind Grease Monkey. Luckily for you, scarves came back in for men about 7 years ago, so there are a lot of great options out there, although somewhat limited if the look you're shooting for isn't "Special Forces Wannabe."

Maybe Thompson's campaign to be Pitkin County Sheriff didn’t work out for him, possibly because his campaign poster included a peyote button, possibly because the man was a maniac. But he will always be the Sheriff in my eyes, and I wish for a world where that happened for all of us.

Borges was involved in some of the coolest guerrilla writing ever. Borges co-founded the journals Prisma and Proa, which were large, one-sheet journals pasted to the walls in Buenos Aires. As Borges aged, he was less proud of this work, and he tried to find all the copies he could and destroy them. Now that time has marched on, there are copies under lock and key. What better way to honor Borges than to fulfill his wishes, put an amazing heist team together and recover Borges' stuff. We need a techie, a getaway driver, a demolitions expert, a violent knife enthusiast who is a total loose cannon, someone who can climb an elevator shaft, and a charismatic leader who makes us feel like what these folks did was wrong, but we're also mostly okay with it.

Murakami is famous for his writing, and he's famous for his running. In an interview, he said he tries to run without too much in his head, but once in awhile a writing idea pops up. The best way to get your head empty again is to take whatever's in your head and put it somewhere else. With tattoo markers, Murakami can write the idea on his skin, get them the hell out, and keep the inside of his brain nice and tidy.

This is a one-of-a-kind game/conversation piece, homemade being the only way to go when we're talking about someone super rich. We collect a small packet of Rancid frontman Tim Armstrong’s beard hairs. Then, a similar packet of Tim Armstrong’s pubic hair. We then put them in two small vials, make a nice wooden stand for them, and King can ask people whether they know which is which. I know this is a vile suggestion, but it seems like a very Rancid thing to do, and King is an avowed fan. 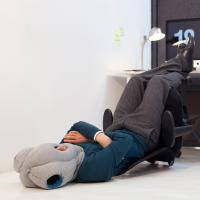 Virginia Woolf: A Room. Sort Of.

An Ostrich pillow isn't exactly an entire room, but at least it provides some level of illusion that nobody else is around. And we'll paint a terrifying face on it. That way, if anyone does show up, this'll scare them the hell off so Woolf can get some work done.

A 5-star Goodreads review written by the one person on Earth who has never heard of Harry Potter but read Casual Vacancy and thought it was badass.

A few years back, Rutgers had a star-studded cast of speakers. One of them was Toni Morrison. The other was Snooki. If you don’t remember Snooki, I like you, let's hang out. Unfortunately, Snooki’s speaking fee was $2,000 more than Toni Morrison’s. Which meant that they had a writer of unusual talent that they payed less than a Jersey-ite of no discernible talent, if you don’t consider being sunburned and belligerent a talent. Holidays are a good time to right the wrongs. Let's do this. 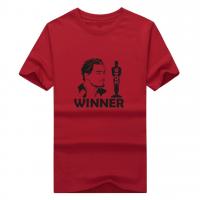 Steinbeck was nominated for the Nobel four times before he won. And in all honesty, lots of folks felt the win was more of a make-up for his past losses than a legit win. In this way, maybe Steinbeck and DiCaprio are intertwined, and Steinbeck could take a little solace in DiCaprio's Oscar win, which came after five nominations and was seen as a bit of a consolation prize. They are victims of the system, man.

I feel like Joyce was the original hipster. If he was famous for his Pez dispenser, I'd be chomping down on artisanal Pez right now. The silliness of a single piece of $4.00 Pez emerging from Spider-Man's neck is almost more than I can handle. ALMOST. 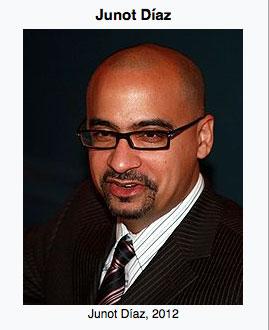 What the hell is this? Why is this picture of Diaz, mid-sentence, the one used on the place where he's probably seen the most? Just do an image search, there are HUNDREDS of better choices. 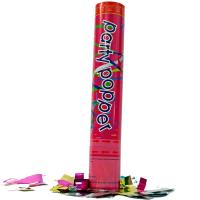 I like to get these for people I've done Nanowrimo with. It's nothing huge, but it's good to take a second and say, "Hey, I finished something." With Z Is For Zero expected in 2019, she's got something to celebrate.

Edgar Allan Poe: A Roll of I Voted Stickers

If, as is the theory, Poe was a victim of cooping (an early form of election fraud where they’d kidnap you, keep you in a room and feed you booze until you agreed to vote for a candidate. Which, compared to modern voter fraud, doesn’t sound so bad. At least they buy you a drink) then he deserves the little white oval as much as anyone ever has. I might even go so far as to say he should get 500 of them. Hell, for $8 bucks? We owe him that much. 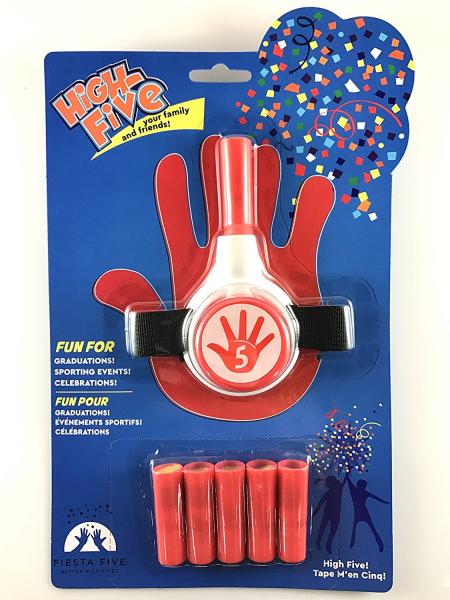 I feel like Joyce Carol Oates has gotten most of the types of praise that can be given except for possibly a “Nice writing. Up top!” This gift ensures that not only will she get the richly deserved high-five, but it’ll shoot out some confetti, making it a high-five to remember.

The Empowerment Plan makes awesome coats. They're designed for people experiencing homelessness, and they transform from coat to sleeping bag to easily-carried bandolier thingie. Dickens started a house for “fallen” women during his life, and he managed it for 10 years. Part of the Empowerment Plan is that the coats are made by formerly homeless women. Plus, the story goes that Dickens conceived of A Christmas Carol while walking late into the night, so I have to believe he’s got a good idea of how cold it gets in the winter. 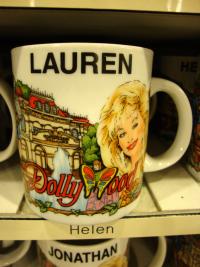 Or maybe I'll just get him a copy of Scrooged. Because fuck it.

I recently learned that Jhumpa Lahiri's real name is Nilanjana Sudeshna Lahiri. She went by the name Jhumpa because, as she says, "I always felt so embarrassed by my name... You feel like you're causing someone pain just by being who you are." My brother had an unusual name in the 80's that's more common now, but every time we went somewhere with a personalized license plate, deck of cards in a leather pouch, or whatever, his name was never to be found. I've got to believe Nilanjana Sudeshna Lahiri doesn't show up on a ton of stuff, and that stinks. But we can fix that in a jiffy.

When Faulkner wrote A Fable, he wrote the outline for the book on the walls of his office. Which didn’t please his wife too much, and she had the outline painted over. After which he wrote the outline AGAIN and then shellacked over it to make sure it would stay. I feel like there’s a compromise to be had here, and it might be dry erase paint.

Because it must be a very rare thing to have your name used as a joke in the title of a parody movie. If it were me, I’d want to know. 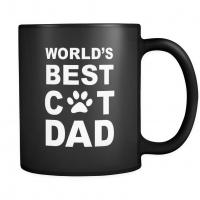 Because without Bartleby the Scrivener there is no Dwight.

Did you know that Mark Twain was the world's best cat dad? He even played pool with one of them:

One of them likes to be crammed into a corner-pocket of the billiard table—which he fits as snugly as does a finger in a glove, and then he watches the game (& obstructs it) by the hour, & spoils many a shot by putting out his paw & changing the direction of a passing ball. 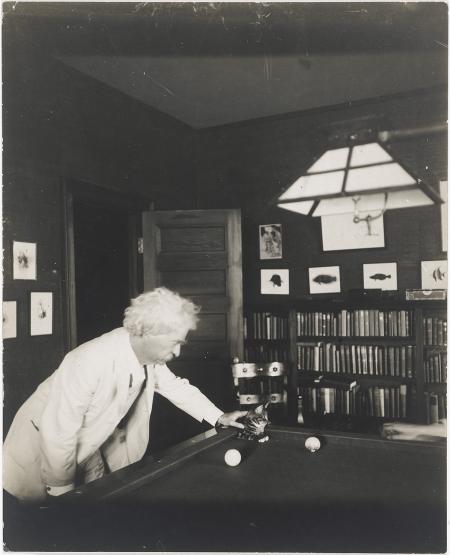 Who's missing? And what should we get them?