Horror Does Not Deserve Your Shame

Ari Aster’s new film, Midsommar, is a genre-bending horror movie. His use of intense, slow-burn dread mixed with dark, satirical humor is a welcome throwback to a style of horror films that were popular in the ‘70s. Midsommar mixes old tropes with fresh perspectives that take horror in a rich and exciting direction. Too bad Ari Aster doesn’t consider Midsommar a horror film.

When asked in a July 3rd interview for Filmmaker Magazine about his brand of horror, Aster deflected the epithet by saying, “I see the film as a fairy tale more than anything else.” Never mind that horror movies often use fairy tales for inspiration. The Company of Wolves (1984), Pan’s Labyrinth (2006), and Sleepy Hollow (1999) jump to mind.

Mr. Aster’s deflection may seem trivial, but the distancing of his exceptional horror film from the genre isn’t an isolated incident. It constantly happens, especially if the exceptional horror film in question gets nominated for an Oscar. Misery (1990) became a “thriller,” Silence of the Lambs (1991) became a “psychological thriller,” and No Country for Old Men (2007) became a “gothic western.” Recently two horror films were nominated for Best Picture in the same year. Both underwent “genre re-labeling”: The Shape of Water (2017) became a “fantasy romance,” and they created a new genre for Get Out (2017), the “social justice thriller.”

So, why the “name game”? Why is it so hard to say “horror”? Even after birthing so many great and influential films, the horror genre still carries a stigma. Let’s get down to it; people who dismiss horror think of it as simple. As in stupid. Uneducated. Lacking social or cultural sophistication. It’s too shallow to concern itself with social issues or politics or the human condition; it caters to base emotions and is undignified entertainment of the lowest common denominator.

I’m not saying that there aren’t horror movies that earn that distinction, but this judgment of worthlessness, this dismissal of value, is presumed across the entire genre. It’s proliferated in coded messages like “a thinking person’s horror film,” and “surprisingly smart,” which subtly imply that horror movies are fundamentally dumb. Consequently, when a horror movie shows greatness that even people who hate the genre can't deny, the answer is to relabel the film as another genre.

Horror does not deserve your shame. It’s a beautiful storytelling style that is tailor-made for allegory and metaphor and is much more diverse and equipped to comment on the culture than you’ve been led to believe. Horror’s purpose is to tap into our collective anxieties. From the fear of nuclear war (Godzilla) to loss of identity (Invasion of the Body Snatchers), to terrorism (the Zombie Apocalypse craze), horror has our number. If you want to know what the anxieties of any decade were, watch the horror films of that period. It is an underappreciated and oft-maligned art form.

So, what constitutes a “horror movie,” anyway? I keep it simple. The dictionary definition of horror is “an intense feeling of shock, dread, repulsion, or terror.” So, a horror movie tells a story that gives the viewer an intense feeling of shock, dread, repulsion, or terror. The definition needs to be loose because what it takes to give each viewer those intense feelings is subjective. Horror is an emotion first and a setting later. It is adaptable and universal because it connects with the moviegoer on a personal and emotional level. It goes directly to our primal fears and anxieties, and that's an area where we are all equals.

Once we emotionally connect, horror is free to work in any setting. It can be supernatural, but it doesn’t have to be. Hockey masks, knives, and zombies can come in handy, but they aren’t required. That allows movies as different as Hellraiser (1987) and Robert Wise’s The Haunting (1963) to be horror films. The Blair Witch Project (1999) can be ambiguous and bloodless and still be a terrifying horror film. 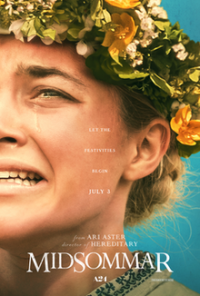 I think it’s important to note that the artists who created the films that underwent “genre re-labeling” actively chose to tell their specific stories through the lens of shock, dread, repulsion or terror. They also actively chose to use a horror allegory or metaphor to interpret their themes. They used symbolic monsters to comment on real ones (the fallacy of a post-racial America in Get Out, and domestic trauma in Midsommar). What’s sad is that the reason their films were so effective is because of the poetry of horror, its ability to convey the abstract through simple visual representations. But when these artists distance themselves from the source of their poetry, it reinforces that bias against horror. The bias says that if horror creates true poetry and art, it’s no longer horror.

For some people, there is shame around loving horror movies. I have watched cineastes, movie lovers who pride themselves on seeing every type of film, act embarrassed when they admit to liking a horror movie. They need to justify why they like a horror movie instead of just liking it. It’s an embarrassment that is reserved for when we feel we don’t match up to the cool kids.

The shame is so real there’s even a new subgenre called “post−horror,” which purports to showcase dread over shock and gore. This description is frustrating because these “post-horror” movies are the descendants of a proud facet of horror’s broad storytelling style (Don’t Look Now, Rosemary’s Baby, The Innocents, The Changeling, The Shining, and many more). They are what horror has been working up to for all these years.

Why are so many people so ashamed of liking horror movies that they feel the need to go to the extent of creating a new subgenre to feel okay about it? In our culture, we judge certain emotions to be “good” and others to be “bad.” Some emotions are considered socially unacceptable, and some people look down upon them and anything that has to do with them. Horror links to the ugly parts of us, those emotions that are not socially acceptable. By liking horror, you might find yourself also socially unacceptable.

Of course, none of that is real. It’s someone else’s opinion. Emotions are just emotions; they don't align with good or bad. It's what you do with those feelings that fall into the category of good or bad.

And that’s where I think the horror genre has important value. It gives us a safe outlet for our free-flowing anxiety. Real life problems have a heavy weight attached to them, but horror movies can’t hurt you. The fear is temporary, and there is power in facing fear and walking away from it unharmed. It’s a diffused bomb. That movie moment can never scare you again—it gets turned into a thrill.

Ultimately, I think horror endures because deep down we need it. We need a stand-in boogeyman. It isn’t a social or a cultural need; it’s a human need.

And there’s no shame in that.

S.A. Bradley is the host of the Hellbent for Horror podcast and author of Screaming for Pleasure: How Horror Makes You Happy and Healthy. He is a lifelong fan and champion of the horror genre (movies, books, comics, music, stories, etc). He is a writer of screenplays and stories and articles on horror, and while in film school he worked on some very low budget independent films. Mostly he loves to talk about horror.

Horror definitely doesn't get the credit it deserves.

This persisting question and scattered debate is actually of great interest to me, but not because I worry about "shame."

Get Out was basically a feature-length Twilight Zone or Outer Limits episode, not every episode of which was "Horror." Are its terror-inducing qualities also its most-defining qualities?

You can view No Country for Old Men as a "Horror" film, or as a "Modern Western," or even as a sort of "Rural Noir." Which of its similarities with other genres takes the most precedence? Why not call it a "Horror-Noir-Western," or even just a "Western?" But if vicious criminality elicits some sort of anxiety or fear in the audience, and if that is what makes a film a "Horror" film, then are Fargo & The Counselor also "Horror" films?

What about movies or books dealing directly with child abuse or kidnapping? Are they only "Horror" movies if there are goblins involved?

I tend towards the perspective which holds that "Horror" has indeed been around so long that it's actually not very well defined as a genre, and therefore I can't really fault people for not calling everything "Horror" which could possibly bear the name.