I’ve never much considered myself a political writer, in the sense that I went out of my way to make some kind of statement about the world in my fiction. This is mostly because I believe one’s politics weave their way into any written work, consciously or not, so there’s no overt need to think in political terms when sitting down to put words on paper (or on a screen, as it were). Whatever your worldview, it will find its way onto the page.

I find myself overly critical of my writings, insisting that the monsters and fucked-up situations are too hollow, too trivial, too meaningless.

But lately I’ve felt that maybe my writing should be more explicitly political, given the racial justice movement happening in this country, and the pandemic still wreaking havoc around the world (though of course, it’s hitting the U.S. hard right now because large swaths of the nation, including my home state, like to pretend COVID-19 simply doesn’t exist). One of the most uncertain elections in my lifetime looms in November, as does the threat of another four years with a certain sentient lump of cancer currently occupying the White House. Climate change is still a thing, and we’ll still have to reckon with that once the pandemic’s under control. North Korea’s still a thing, too, as is the problem of concentration camps near the U.S. border—basically all the shit we had to deal with and worry about the last four years, before 2020 came along and said “hold my beer.” I feel a responsibility to tackle the state of the world—perhaps not a moral duty, per se, but I definitely feel a sense that writing about anything other than current affairs is a frivolous endeavor.

But is that true? Do writers actually have a responsibility to address what’s happening in the world?

We’ll start with the latter camp first. From a January 2016 feature in The New York Times called Bookends—in which “two writers take on questions about the world of books”— Zoë Heller and Francine Prose analyze the validity of William Faulkner’s famous axiom, “The writer’s only responsibility is to his art.” Neither author thinks this is entirely true (with Heller pointing out that Faulkner was more committed to alcoholism and assholery than writing), but both admit that finding a balance between complete moral bankruptcy and subservience to morally-charged writing can be tricky. Prose writes:

We want to write the loveliest, truest, most original and affecting sentence, the most musical poetic line. But meanwhile we may notice that the world is going to hell in a hand basket; and there we are, in our comfy ergonomic desk chairs, pursuing an activity that, we fear, is less socially useful than cultivating hydrangeas. Complicating matters is the fact that writers tend to be observant, which makes it harder not to notice the horrors transpiring in distant countries, and in our own.

This keen ability to “notice the horrors” of the world led writers such as Elizabeth Gaskell, Charlotte Brontë, Harriet Beecher Stowe, Charles Dickens, Leo Tolstoy, John Steinbeck, Upton Sinclair, and James Baldwin, among others, to create conscientious novels that grappled with various sociological issues, from racism to working class rights, poverty, education reform, industrial factory standards, and homophobia, to name just a few. In many instances, the works these writers put into the world were their way of “fighting the good fight,” of contributing in some way toward societal change. And, as Francine Prose notes, in another Bookends piece from The New York Times, works of fiction can directly affect progress. She mentions Stowe’s Uncle Tom’s Cabin, and the likely apocryphal story of Abraham Lincoln asking the author “if she was the little lady whose big book started the great war.” While Cabin certainly helped to change minds about slavery by humanizing enslaved people, it isn’t likely the novel had any direct impact on the Civil War; on the other hand, we have Sinclair’s The Jungle, and its “disgusting portrait of the meatpacking industry [which] rapidly led to the passage of the Meat Inspection Act and the Pure Food and Drug Act,” showing that fiction can spur social change. 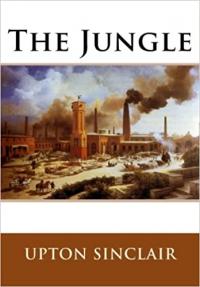 Of course, literature can negatively affect public opinion as well. Both Prose and Mohsin Hamid, the other writer in this particular Bookends discussion, point to “The Protocols of the Elders of Zion,” a 19th century fabrication purporting to reveal the Jewish people’s secret world domination plot, which directly impacted a worldwide spike in anti-Semitism and the rise of the Nazi party (thanks in no small part to car manufacturer Henry Ford, who published and circulated the pamphlet in America). Prose also mentions the “sacred texts of most religions (let’s call them narratives and leave others to debate the question whether they are fact or fiction) have been used to justify unspeakable violence.” That fiction can be used for evil makes the moral imperative to fight hatred and bigotry with words all the more potent.

And yet, when I sit down and attempt to give in to this imperative, to write something explicitly political or socially-charged, I am hit with the proverbial writer’s block. Ideas don’t really flow, and even when they do, they peter out quickly. So I once again have to accept that I’m simply not that kind of writer, and go about my business conjuring up monsters and fucked-up situations—which can, and often do, especially in my case, become stand-ins for various social issues. But even in that case, I find myself overly critical of my writings, insisting that the monsters and fucked-up situations are too hollow, too trivial, too meaningless. They do nothing to address what’s going on in the world, even when, in a subtle way, they are.

In other words, I’m stuck in a vicious cycle, and I don’t really know how to get out.

But I do know one thing: the solution isn’t to stop writing altogether. There is a way through with my fiction, I just haven’t hit upon it yet. Maybe I just need to vomit every feeling I have about current affairs into a terrible short story I’ll never seek to publish anyway and move on. Maybe I need to imagine even more elaborate monsters as stand-ins for everything wrong in the world right now (or perhaps even as symbols of my own discontent). Maybe I need to think about it less, let whatever ideas I have take hold on the page, and worry about what the piece really communicates later, a possibility that relates back to my earlier assertion, that no work of fiction is void of politics anyway. That was certainly the case for Faulkner—despite his assertion that craft should be the writer’s only concern, he often found himself addressing race relations and segregation in his works, albeit in the sloppy, bordering-on-racist-itself approach that only a privileged Southern white man could achieve.

I don’t really know which of these is the best course of action, or if none of them are valid courses, but regardless, there’s an answer, and if I just keep working at it, eventually I’ll find the solution.

Buy The Jungle at Bookshop or Amazon

The Period Part 2 - Dot Dearth: Postponing The Period On Purpose

Post-Mortem: "The Sound and the Fury" by William Faulkner

The Blagger's Guide to William Faulkner

Community Manager
helpfulsnowman from Colorado is reading But What If We're Wrong? by Chuck Klosterman July 29, 2020 - 9:51am

I think the full Hemingway quote is good to include, plus it's kinda hilarious:

The writer's only responsibility is to his art. He will be completely ruthless if he is a good one. He has a dream. It anguishes him so much he must get rid of it. He has no peace until then. Everything goes by the board: honor, pride, decency, security, happiness, all, to get the book written. If a writer has to rob his mother, he will not hesitate; the 'Ode on a Grecian Urn' is worth any number of old ladies.

I don't see his statement as against having political statements in art. If your piece is very political, the responsibility is still about making that piece of art as useful and beautiful as possible, and those things are not at odds with politics. I see his statement as more about the obsessive nature of some artists where the world tends to fall away, which sometimes leads to disengaged behavior. I am guilty of this in my personal relationships. I have an obsessive nature that means I have tight focus on things that are very interesting to me (good) but can also lose sight of everything BUT that thing (not always good). It doesn't mean I'm putting out cigarettes in a kid's eye, but I tend to overlook things that aren't directly related to the task at hand. Sadly, the results are not Grecian Urn level.

Yep, good article. Look, there are a lot of writers blatantly interjecting their politics into their work, often times into sub-par work, hoping their virtue signaling boosts the final product in certain ways e.g. sales, acclaim, catharsis, whatever. This is very prevalent in more liberal/progressive corridors right now. So the thing is, if you want to write about monsters and fucked-up situations, you should and need make no apologies about it. If you want to bury some politics or issues in your stories, make the reader suss it out and think it over, draw their own conclusions, nothing wrong with that. In fact, I think we could use a little bit more of that type of nuance, that type of writing that isn't so on-the-nose. In the current landscape, we could use more well crafted stories that don't jam an author's politics down the readers throat - but just looks to entertain and scare and maybe inspire them a bit in daily life. My two cents.

I have been writing for over 10 years now and I have noticed that you now have to catch up with the times and focus more on promoting through online media outlets. I started to create a channel with YouTube and come across a company where you can buy targeted youtube subscribers https://socialexperience.org/buy-u-s-a-subscribers/  and that seemed to drive my traffic a bit. Fear is what it causing more issues, once it dies out I am sure it will get back to normal.

Writing fiction requires good imagination, my imagination was always poor. When I need to write even a simple essay, I usually apply for help. I found this service www.nursingpaper.com that usually helps me with my papers. They can write, edit and proofread any paper, and make it perfect.